26/05/20 UPDATE: The amount required to unlock Pavise Crossbowmen with Honour was listed incorrectly and has been amended.

25/05/20 UPDATE: A few days ahead of schedule, the final Season III unit, Pavise Crossbowmen (tier 5), will be available to unlock from May 26 - from midnight server time!

As was the case for Season II, the new units that will be available during the course of Season III will need to be unlocked. For the Wrath of the Nomads units, this was achieved by completing weekly challenges, which scaled up as higher-tier units were introduced. The release of Season’s III units will follow a similar pattern, with four Seasonal units unlocked via Unit Challenges, with the Tier-5 Pavise Crossbowmen also able to be accessed with Honour points.

Each Unit Challenge stage will require a number of tasks to be completed, 6 out of 8 for Tier-3, 8 out of 10 for Tier-4 and 10 out of 12 for Tier-5. The Season III schedule is currently planned to last 10 weeks. 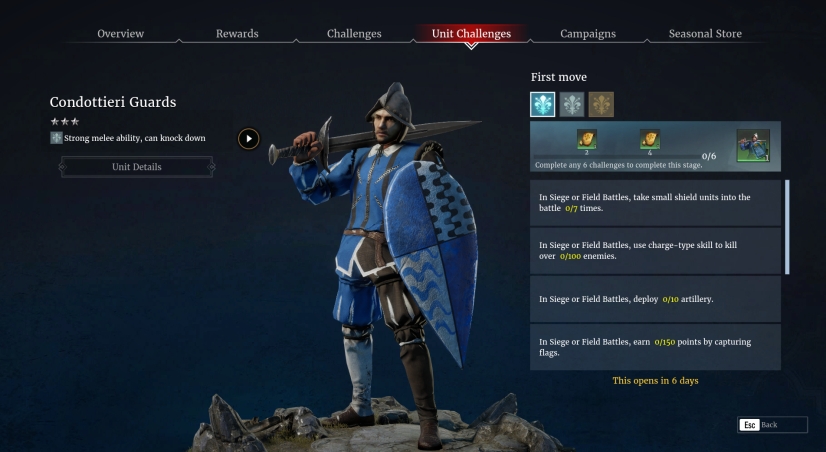 In addition to the four Seasonal units, Season III will introduce a new Mercenary unit, the Martellatori, which will be available from the Mercenary panel of the Unit interface for 4,900 Sovereigns or 700k Silver.

(*Dates are subject to change) 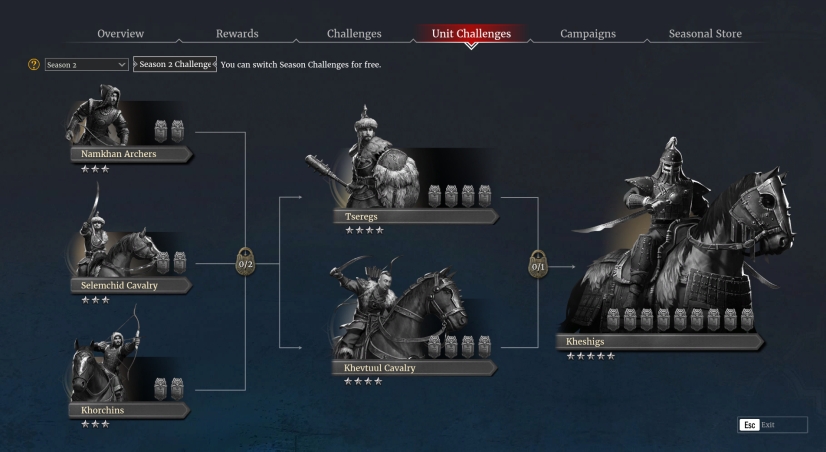 For those that didn’t manage to unlock all of the previous season’s units, the requisite Season II Unit Challenges will also be accessible for the duration of the new season. You can access them from a drop-down box in the top-left of the Unit Challenge screen of the Seasons interface (F5). Note that, while similar prerequisites will apply to unlock them, there will be no wait for higher tier units to become available. Also be aware that the additional rewards that were specific to Season II for unlocking units - Fangs and cosmetics - will not be issued, nor will it be possible to acquire Season II cosmetics from the Seasonal Store.

It’s important to note that you can only focus on one set of Unit Challenges at a time. If you wish to switch from completing Season III Unit Challenges to Season II’s, it will cost 1,000 Silver and there is a time penalty to switching back (which can be offset by Silver), so consider carefully when might be the best time to focus on the units you need. If and when you do switch, your progress will be saved for when you return. 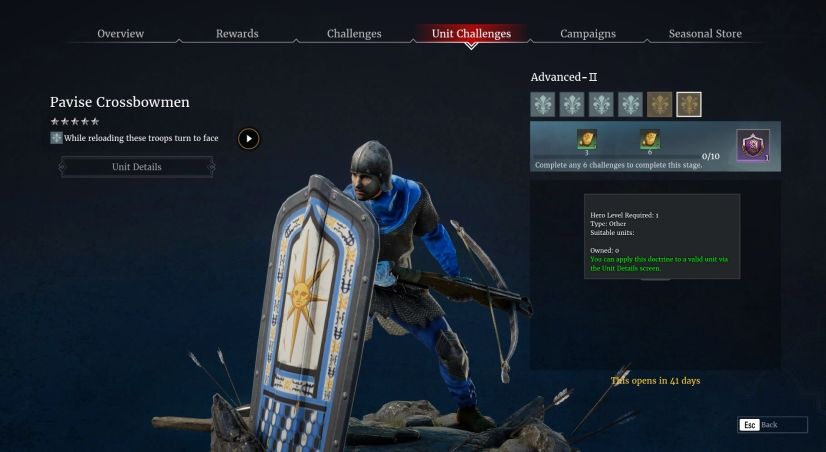 As well as the return of unit Unlock Challenges, new to Season III are Experience Challenges and Growth Challenges. Together they comprise all the Unit Challenge stages, but there are differences among them in terms of the rewards you’ll receive.

Completing Experience Challenges (the first stage) offers a way to temporarily unlock and progress Season III units before they are permanently acquired through Unlock Challenges. All Unit XP and Veterency gained will be retained, but only if the unit is permanently unlocked before Season III ends (via stages two, three and four - depending on the unit tier).

If during the course of Season III you are finding it difficult to stay ahead of Unit Challenges, individual tasks can be completed for 100 Sovereigns, which was a feature of the previous season. Regardless of how you intend to unlock and advance your units, we hope you enjoy doing so - good luck!

Keep an eye out for future articles detailing other features and content coming as part of Season III: Soldiers of Fortune, due April 21st.

The above images are taken from a pre-release version of the update and cannot be considered final.