25/05/20 UPDATE: Stage 3 of Season III's campaign (due to begin May 29) is to be extended by a week. This is to allow more time for changes to the Conqueror's City to be completed. The updated schedule is below and we'll be providing more detail on those planned changes soon.

07/05/20 UPDATE: The dates for each stage of the Season III Campaign were previously incorrect and have been amended below.

As well as unlocking and improving new units, a new Conqueror’s Blade Season means that full-scale war is once again on the horizon. Starting on May 5th (prior to which Territory Wars will remain in ‘Drill Mode’) will be Season III’s Campaign, an ever-escalating conflict that will lead armies into the heart of the Borderlands and the fight to secure the game’s ultimate prize, the Conqueror’s City!

Closely mirroring Season II’s road to war, the new campaign will comprise of five stages. If you want to follow along, bring up the Seasons interface (F5) and select the ‘Campaigns’ panel: 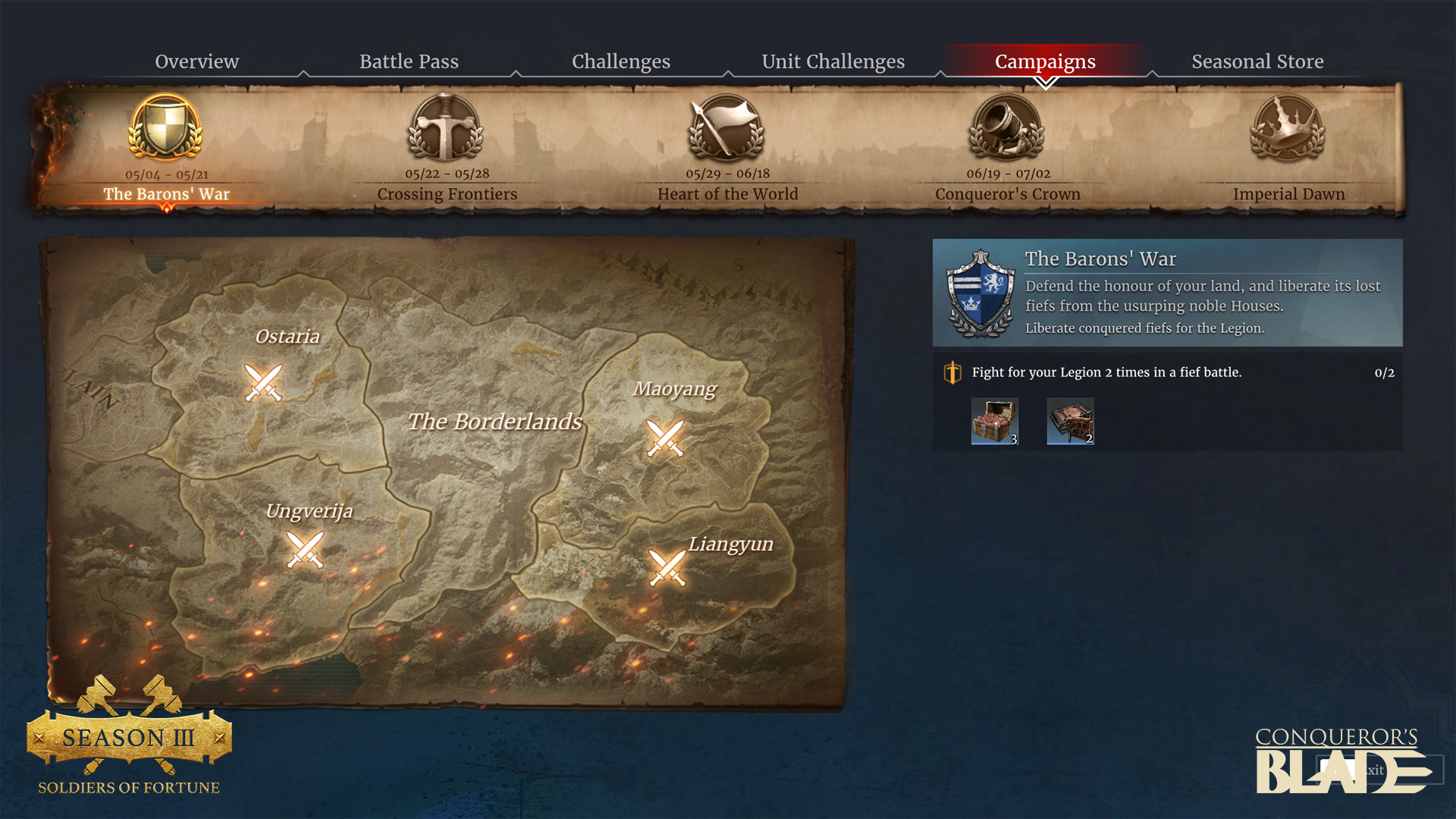 The Baron’s War is the opening stage of the season-long conflict, allowing houses and alliances (and Cohorts and Legions), to capture and hold fiefs within their current region. Building up a secure heartland and securing the resources necessary to fund future advances is an important first stage in any campaign.

Crossing Frontiers is when the border forts that guard the access routes into neighbouring regions open up to allow armies to expand their territories into regions that offer resources that are hard to secure at home. During this important period, while the Borderlands will be accessible, the fiefs within will remain independent and unconquerable.

Heart of the World is the stage of the campaign during which houses and alliances can start to settle the fiefs of the Borderlands, where the stakes and potential rewards are much higher. As well as securing valuable resources, warlords will want to occupy a favourite position for the season’s most climactic battles.

Conqueror’s Crown sees the iconic gatehouses that guard the Conqueror’s City open up, allowing players to fight for the right to claim the ancient city as their own. The city is due some alterations, as are the rewards for its eventual occupation (on which we’ll share in a future article), but as before, houses and alliances will have to secure and hold onto a gatehouse fief in order to be able to take the city. Members of the house and/or alliance that holds the city at the end of final Territory Wars on July 9 will be crowned as World Conquerors.

Imperial Dawn is when peace breaks out! Houses and alliances put down their arms in homage to the new World Conquerors and begin the long march home, to make preparations for a new season. Rewards will be handed out and warlords will have the opportunity to wrap up their unfinished seasonal business, by completing Unit Challenges, maximising Glory and making sure all their Barbutes are put to good use before they expire.

Ahead of the commencement of formal hostilities, we’d like to wish good fortune to all houses and alliances. May the best of them win, and may you all have fun trying!

Please be aware that the above dates are subject to change and it may become necessary to extend the Season. We will, of course, provide full updates in any such circumstances.