In the Colosseum, gladiators weren’t the only ones laying down their lives for the entertainment of the Roman public. Animals had their part to play in the spectacle too, and thousands of wild beasts were hunted and killed in amphitheatres for the amusement of bloodthirsty onlookers.

Named “venatio” (“venationes” plural), this particularly cruel form of entertainment was incredibly popular and led to the slaying of thousands of animals.

When Did Venationes Begin?

The first recorded venatio is thought to have occurred in either 185 or 186 BC as part of a military victory celebration held by Marcus Fulvius Nobilior. Marcus hosted games where gladiators would fight big cats in a staged hunt.

Roman historian Livy wrote of the auspicious event: “a hunt was staged in which lions and panthers were the quarry, and the games were celebrated with practically all the resources and variety that the entire age could muster.”

One of the most extravagant venationes occurred in 248 AD, when elephants, tigers, hyenas, hippos, giraffes, and more filled the amphitheatre for the celebration of the millennium of Rome, marking the supposed anniversary of Rome’s founding by the legendary Romulus.

By the fourth century, the popularity of venationes had dropped, mainly due to the waning finances and military might of the Roman Empire, and thus their ability to procure the exotic animals used in a venatio. 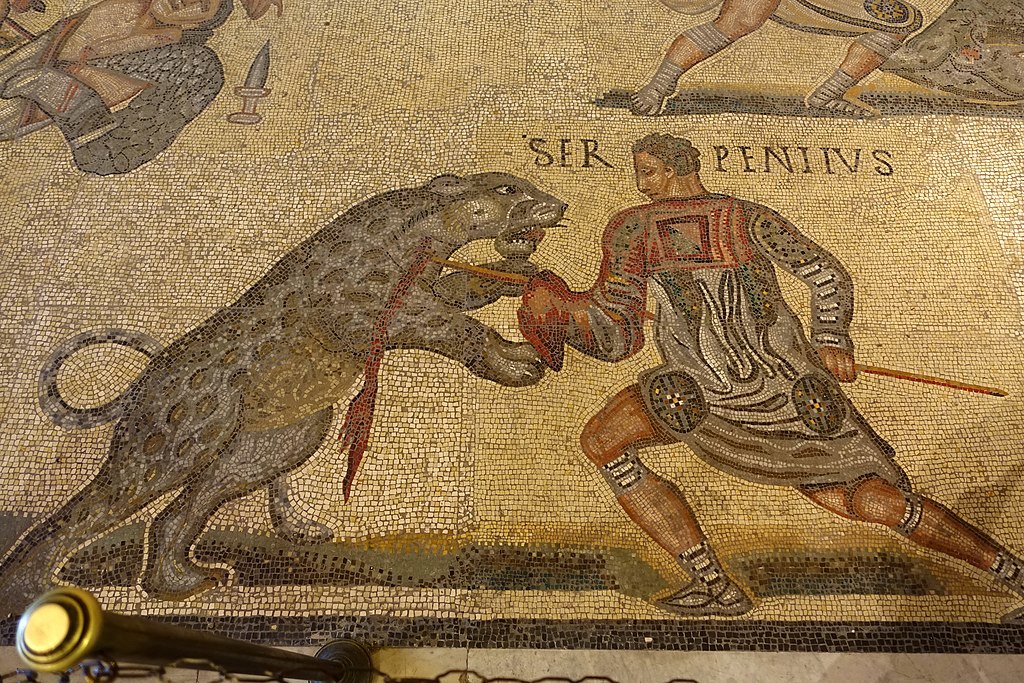 A fragment of a Roman marble and limestone mosaic (300-400 AD) depicting a venatio. Displayed in the Galleria Borghese in Rome, Italy.

What Happened in a Venatio?

Venationes were held in the Colosseum, the Roman Forum, the Saepta, and the Circus Maximus; all mass entertainment venues located in Rome. The exotic beast hunts would take place in the morning as a precursor to the main event of gladiatorial bouts in the afternoon.

Very few animals survived a venatio, and thousands of animals would be slaughtered in a single day, resulting in the alteration of the ecosphere of an entire region thanks to this bloodthirsty exercise.

The animals fought each other or were hunted, but sometimes were pitted against “venatores” (hunting gladiators). The armed fighters participating in the exhibitions were criminals, prisoners, or professional hunters. Venatores would train for their bouts with wild animals, and at first, the animals were chained so they could easily be killed by the gladiators. However, by 100 BC, the animals were given free rein to roam the arena and possibly kill their human opponents.

It wasn’t just the Roman people who were excited by venationes; their Emperors were too. Emperor Commodus (ruled from 177-192 AD) was known as a gladiator and thought himself a venatore too, and eagerly entered the venationes himself.

Which Animals Fought In The Arena?

In order to entertain the masses with a venatio, Roman authorities would gather animals from across their Empire. They went to great lengths to collect everything from bears from Scotland, to tigers from Persia, and rhinos from India. Roman poet Oppian spoke of the danger involved in capturing such beasts to bring back to Rome, writing: “bears greatly rage with jaws and terrible paws.”

Lions were especially prevalent in venationes and gladiator bouts and Caesar once imported 400 lions from Syria and North Africa for use in the Circus Maximus. Not all the animals used in venationes were lethal. Cows, horses, gazelles, goats, and rabbits all entered the arena, and some were trained to perform tricks rather than fight to the death.

Wolves were not displayed in the hunting portion of venationes. They were considered sacred to the Romans, due to the famous myth of the founding of Rome by the orphaned twins Romulus and Remus, raised by Lupa the she-wolf. With reverence to this tale, wolves were not intentionally harmed.

Take a look at more Conqueror’s Tales about the culture of the Ancient Romans that inspired Conqueror’s Blade: Colosseum, with the life of a gladiator, amphitheatres, female fighters, and just what the Romans ever did for us.