As the final gladiator faction of Conqueror’s Blade: Colosseum steps into the deadliest arena known to man, we ponder the question: was it also known to woman? Tales of fearsome male fighters achieving victory in the Colosseum are rife in Ancient Roman history, but the fairer sex also got to experience the same triumphant action—albeit on a smaller, less grievous scale.

Who Were the Female Gladiators?

The term “gladiatrix”, now used to describe a female gladiator, is a modern term and was not in use until the 1800s. In their time, they were referred to as “ludia” (female performers). The gladiatrixes wore the same costumes as their male counterparts—-topless, a loincloth, and grieves covering their legs and arms. Becoming a ludia meant a woman was no longer eligible for marriage and was considered undesirable and low-class, despite the attention they garnered from ogling male fans.

When Did Women First Become Gladiators?

History only has a few clues about when women were first permitted to enter the Colosseum and become gladiators. A marble relief found in Turkey dating back to the 2nd century AD depicts two female gladiators engaged in combat, whose stage names are inscribed as “Amazon” and “Achillia”. The inscription also states that the women fought to an honourable draw. The statue most likely tells the story of Achilles and the Amazon queen Penthesilea, in which Achilles slays the queen in battle at Troy and then falls in love with her, regretting his actions.

A statue discovered in Hamburg from the same period depicts a female gladiator holding a raised “sica” (a short sword or large dagger) in a triumphant pose.

Literature from the era also supports the existence of female fighters. The Roman poet Juvenal wrote in his Satires:

“What sense of shame can be found in a woman wearing a helmet, who shuns femininity and loves brute force...If an auction is held of your wife's effects, how proud you will be of her belt and arm-pads and plumes, and her half-length left-leg shin-guard! Or, if instead, she prefers a different form of combat how pleased you will be when the girl of your heart sells off her greaves! Hear her grunt while she practices thrusts as shown by the trainer, wilting under the weight of the helmet.”

However, in 20 BC, a showrunner in Pompeii organised a festival in honour of Apollo, and the entertainment included five sets of female fighters. The event was packed, with people travelling far and wide to see the spectacle and may have been the first occurrence of female gladiators.

Female gladiators didn’t last forever. Their lust for sporting achievement almost led to their participation in the Olympic Games, but instead subsequently got the women banned from fighting in the arena. In 200 AD, Emperor Septimius Severus travelled to Greece to watch the Antiochene Olympic Games, and upon seeing the Grecian female athletes, was concerned that Roman female gladiators would want to compete in the Olympics as well. When he returned home, he banned their involvement in gladiator combat, dubbing their participation ‘unseemly’, thus putting an end to any professional sporting ambition. 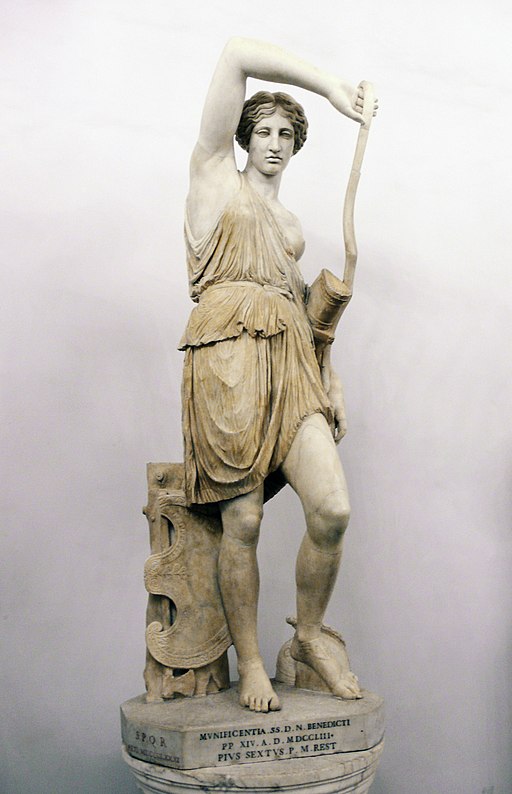 How Did Women Compete in the Colosseum?

While men were rigorously trained to fight and provided with tutors and barracks, women were more of a showcase in the Colosseum and couldn’t learn the same skills needed to properly compete in an all-out brawl. Female gladiators were most likely taught privately with a “lanista” (wooden sword).

Gladiator battles were a popular form of entertainment, and organisers needed new and interesting content to keep ticket sales up. One of the ways showrunners kept the Roman public coming back was with the female gladiators, thought of as hilarious by the spectators. As performers, the women were not always in danger of losing their lives like the male gladiators and mostly acted as entertainers for the crowd.

Why Did Women Become Gladiators?

Just like their male counterparts, women wanted the same luxuries afforded to them for becoming gladiators—-fame, fortune, and fun. Roman women in their patriarchal society had little freedom and were generally not allowed to make any decisions for themselves. Female gladiators were some of the first wholly independent women in history, amassing their own wealth and glory. Souvenirs were created in the likeness of some of the most famous female gladiators, including dolls, art, and oil lamps, as their popularity grew.

As more women sought to join the gladiator games as a ludia, the token performances gave way to real tournaments, where prize money was up for grabs, and real weapons were used.

Check out more Conqueror’s Tales about the Ancient Romans and their culture with our look at the gladiatorial games, the life of a gladiator, their amphitheatres, and just what the Romans ever did for us.