The CBL Winter War 2021 Tournament has come to a majestic close, and we have all the glittering highlights right here! Throughout dozens of nail-biting and ferocious battles, the valiant teams fought for their place in the next bracket (as well as bragging rights and prizes), eventually leaving us with the courageous champions.

First and foremost, we’d like to thank everyone who participated, and our fabulous shoutcasters: CoffeeFuelledGaming, KiNGAlphaTv, Evo Loz Gaming, 9Fingers, and MarkofGee. 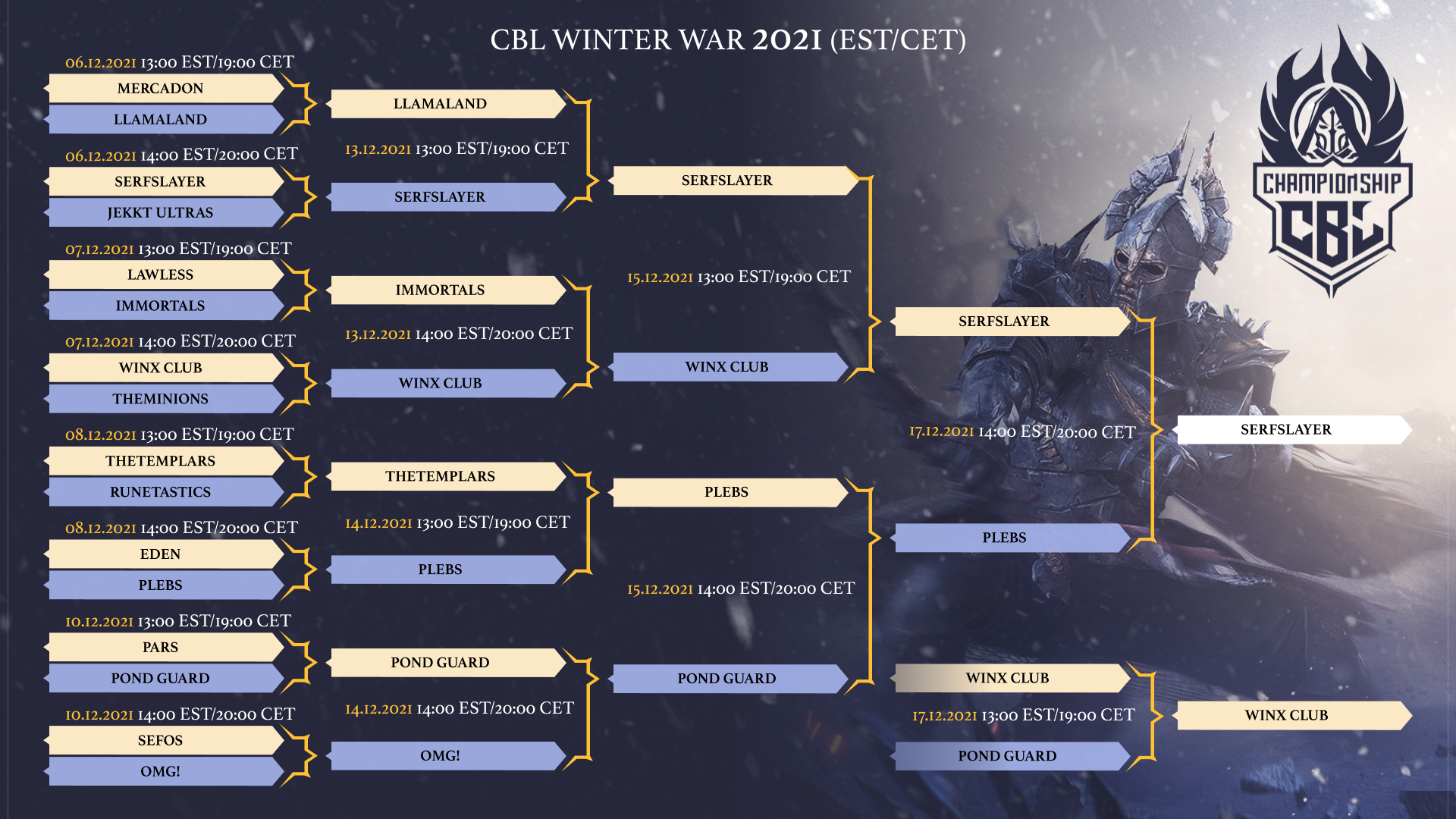 Congratulations to SerfSlayer who seized the crown this time around, blowing their fourth-place standing in Fall Fight right out of the water!

The team had this to say of their victory: “Champions do not become champions when they win the event—but in the hours, weeks, months, and years they spend preparing for it. The victorious performance itself is merely the demonstration of their championship character.”

Plebs upped their ante this time around in the CBL, and have improved upon their third-place finish in CBL: Fall Fight 2021!

Their captain Templeshot had this to say of their successful tournament run: “Thanks to my team for putting in the hard work and effort to make this our best tournament yet. We've participated in three tournaments now and have finished third twice, and now second. Next time—we'll take the win! Thanks to all the staff for organising this tournament again. GG to all teams involved, this was by far the most competitive CBL yet.”

The team will receive an exclusive Runner-up Player Title, 3,000 Sovereigns, 800 Blades, a Tyrant’s Weapon Chest, and 35 Owl of Minerva Chests.

WinX Club fought hard and came out the other side in a more than respectable third place in CBL: Winter War 2021! Their team had this to say of their experience: “First of all, we would like to thank our opponents, especially PondGuard. The matches we played were so much fun. As WinX Club, we added colour and new strategies to the tournament. We are confident that in the upcoming tournaments we will turn all battlefields into rainbows (red mostly).”

All three teams will be invited to battle for yet more glory on a global scale against the winners of a Tournament hosted by Booming Tech (more info coming soon)!

CATCH UP ON ALL THE ACTION

Missed out on the fun? You can catch up on all the CBL: Winter War 2021 action right here:

Thanks to everyone who made CBL: Winter War 2021 a success! We will host more tournaments in the future, and you can check back right here for more info when the time comes. If you have any feedback about this Tournament, please share it with our team via the Conqueror's Blade Discord.

Follow Conqueror’s Blade on Twitch for more exciting live broadcasts from the team every week, and stay tuned for the ultimate showdown between our champions and the winners from Booming Tech’s own Tournament!