As you wander the bustling streets of Hao Jing, have you noticed the citizens playing a game? That game is Go (Weiqi). Resembling checkers, the black and white circular stones form a tactical game where the objective is to take over the ‘territories’ of the board.

Go is a fantastically intricate game that requires concentration and discipline, and was said to be derived from strategising Chinese warlords, who would use pieces of stone on a map as a means of mapping out their next conquest. Other theories of the origin of the game place it as a teaching tool, and even an ancient fortune-telling device.

The Tang Dynasty not only brought about a Golden Age of poetry and music, but it also continued its cultural intrepidity by developing the now-4000-year-old game of Go further.

Books devoted to the game were penned during this era, and silk tapestries of players were woven to cement its place in their history. 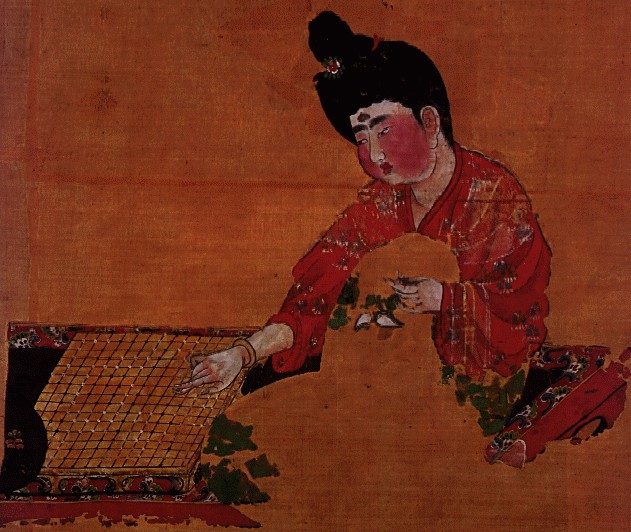 Just as in chess or checkers, this two-player strategy game has black pieces and white pieces (stones, in this case). Players take turns placing stones on vacant points of the board (intersections, not squares). Placed stones cannot be moved, but can be captured by surrounding them with your own stones.

Mirroring military strategy, and all about forming unbreakable walls and strong territories, players should try to capture the corners of the board to make it easier to gain territory and defend. The winner is determined by counting points for every stone captured plus each vacant intersection inside their territory.

Go was possibly the most popular game during the Tang Dynasty, as a huge number of excavated Go boards from the period have been discovered.

Feel free to while away your lazy days playing Go to focus your mind on the battles ahead, and check out more Conqueror’s Tales right here.