Conqueror’s Blade: Scorpio and its many assassin-inspired Units bring ancient Persian factions to life; but what of the legends of the era? Iranian mythology speaks of one such creature—-the Davālpā.

Also known as Himantopus, Old Man of the Sea, and many other names, a davālpā is an amphibious cryptid who tricks unsuspecting victims into giving it a ride… forever.

The etymology of the word ‘davālpā’ combines two parts of the description of the monster. Flexible legs (or in his case, tentacles) are pā, and the way they resemble leather straps is davāl (meaning hide or leather), thus creating the word for this mysterious and malevolent creature of the sea.

Persian sources first refer to davālpā in the Šāh-nāma, an epic poem written by the Persian poet Ferdowsi in 1010 AD. In the story of Kayanid king Kaykāvūs’ expedition to Māzandarān, the davālpā are described as a race of strong horsemen with “legs of davāl”.

Curious then, how the myth transformed into one of a creature with limp legs. That version of the story appears to have been fabricated by seafarers and travellers during the Islamic period. The adventures of a sailor known as Walīd b. Moslem tell the tale of discovering anthropoid creatures with limp legs, who when approached, trapped him with their tail and claws, forcing the man to carry them while they picked fruit from trees. This went on until the traveller got the creature drunk, causing it to release him from its clutches.

These days, Iranian cartoonists and satirists use the image of the davālpā to represent greedy institutions.

A davālpā is amphibious, and therefore usually found by the sea in cliffs and caves. They often disguise themselves as invalids or beggars to lure their victims into “helping” them. They can also be found on uncharted islands in the Indian Ocean, where they sit and wait for potential rides to show up.

The davālpā is fuelled purely by greed and takes delight in tricking unsuspecting humans into carrying them until they die of fatigue. They will dupe sailors and travellers into carrying them by posing as infirm, at which time they use their leathery leg-like tentacles to grip onto the human, enslaving them. The human will then have to carry the davālpā on their shoulders or back until they succumb to exhaustion. Controlling their new human slave, the creature will steer it until it grows bored, or the victim dies.

Just as the Chain Dart & Scimitar can hook into victims and control them in Conqueror’s Blade, so too can a davālpā sink its hooks into humans. 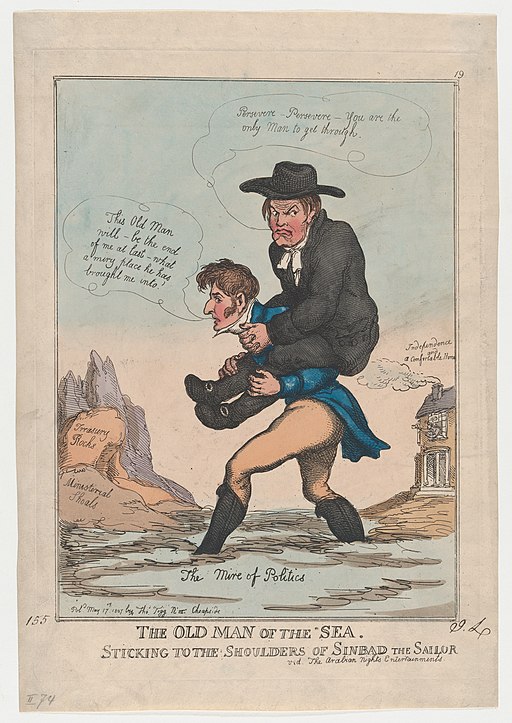 The most famous story of a davālpā is that of the Old Man of the Sea. Sinbad the Sailor, unfortunately, met this monster and was forced to do its bidding until he took advantage o the hedonistic nature of a davālpā, and encouraged it to drink itself into a stupor, whereupon it loosened its grip, allowing Sinbad to escape.