All Hallows’ Eve is upon us, and while we prepare our pumpkins and load up on candy for trick-or-treating, we mustn’t forget the ancient cultures who contributed to the spooky celebration we know and love today. As you participate in eerie events and shop spooky sales in Conqueror’s Blade: Colosseum, you may be surprised to learn that Ancient Romans had their own version of Halloween—Lemuria (or Lemuralia).

Romans were extremely superstitious, and death played a huge role in their everyday lives. Lemuria was no exception and was a chance to subdue malevolent spirits.

The name Lemuria reportedly comes from ‘Remuria’, the festival named after Remus (from Romulus and Remus fame). The poet Ovid wrote, “Romulus complied, and gave the name Remuria to the day on which due worship is paid to buried ancestors.” Historians assume Remuria eventually became Lemuria, as “lemures” is a name for a type of Roman spirit.

The dates and customs may be different, but the spirituality (and spooky vibes) of the event remains the same.

When Did Lemuria Take Place?

Lemuria was a festival in Ancient Rome that took place on three different dates in May (usually 9, 11, and 13 in the Julian calendar)—-not quite the chilly October 31st date we’re used to. Romans believed even-numbered days were unlucky, thus this festival to honour the dead and appease deceased ancestors took place on odd-numbered days.

Although the weather may have been sunny, the festivities were solemn. All temples were shut during the festival, and no one could marry during the three days of Lemuria. It wasn’t all doom and gloom, however, as on the final day a merchants’ festival was held to ensure a prosperous year ahead. 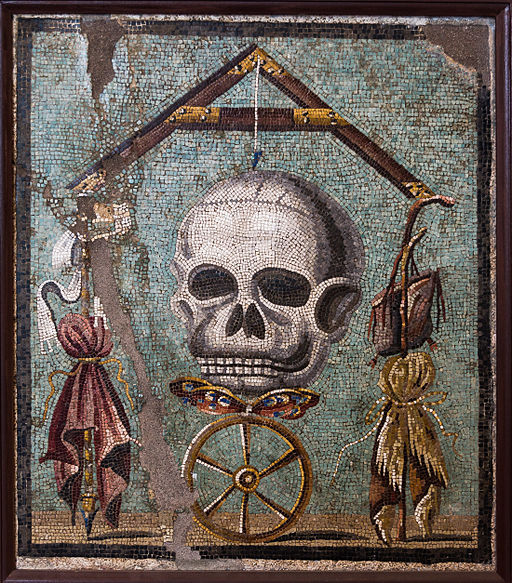 A Roman floor mosaic from Pompeii (1st century BC)

What Happened at a Lemuria Festival?

Lemuria was a private event, rather than a public festival, and the home was where all the events took place. Romans performed rites to exorcise vengeful ghosts of their ancestors from their residences, and the spirits of the restless dead (or ‘lemures’) were appeased with offerings of beans. The spirits or spectres in Lemuria differ from modern depictions of ghosts, as they are not inherently evil but were appeased with offerings and observed with certain rites to prevent them from doing harm.

The head of the household would be responsible for performing a rather odd rite. Romans would take off their sandals and walk around their house barefoot while making a gesture named ‘mano fica’ (fig hand) to ward off evil. They would then use fresh water to clean themselves and spit black beans from their mouth while repeating this incantation; “These I cast; with these beans, I redeem me and mine."

The beans symbolised removing potentially dangerous spirits from the home, and Ovid believed the restless souls would follow the beans and leave.

Check out more Conqueror’s Tales about the culture of the Ancient Romans that inspired Conqueror’s Blade: Colosseum, with looks at female fighters, animals in the arena, and emperors & assassins.