Many days of the week are said to be named after ancient and mythical gods from around the world—from Saturday (Saturn - Roman) to Tuesday (Tiu - Germanic), but none is better known than the origin of Thursday. The English word ‘Thursday’ is named after the Norse god Thor (Thor’s Day), and stands as a testament to his relevance in mythology, ancient history, and popular culture.

The first known written instance of Thor’s existence in Norse mythology was in the seminal record of the Viking age, Gesta Hammaburgensis Ecclesiae Pontificum by Adam of Bremen in the 11th century, who described Thor as the “mightiest” God, and that his subjects believed he “rules the sky; he governs thunder and lightning, winds and storms, fine weather and fertility".

Thor had big shoes to fill as the son of the Allfather, Odin, but the god of storms was not in his father’s shadow when it came to his strengths. As well as commanding rain, thunder, and lightning, Thor was also a protector of his people. Whether a guardian was needed for long sea voyages, or crops were failing and desperately needed rain, or warriors yearned for victory in battle, Thor was there to aid his subjects.

However, Thor didn’t have to go it alone with only the aid of his divine powers—his three magical items came in handy too. Thor wielded his hammer mighty (Mjolnir), his strength-doubling belt (Megingjörð), and his iron grippers (Járngreipr), which he needed to wield his hammer. He also had a couple of furry friends—Tanngrisnir and Tanngnjóstr, his magical goats who pulled his chariot and, in a dark turn, provided him with a tasty meal (though they were revived by Thor the next day). 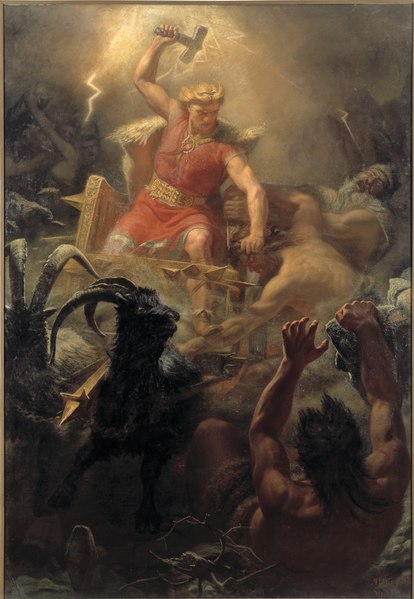 Thor's Fight with the Giants by Mårten Winge (1872)

Many accounts of Thor’s bravery and reliability make him the perfect god to choose to bestow a namesake day upon, and his resilience throughout failure is an inspiration to many. Even when Thor is fooled or outwitted, this does nothing to dull his accomplishments, both past, present, and future in the eyes of his fellow gods and his worshippers.

So if you find yourself stuck indoors on a rainy Thursday afternoon, think of the exploits of the hammer-wielding thunder god and you might find yourself imbued with Asgardian levels of productivity!

As a new era begins in Conqueror’s Blade: Helheim, stay tuned for more Conqueror’s Tales from the Viking era!