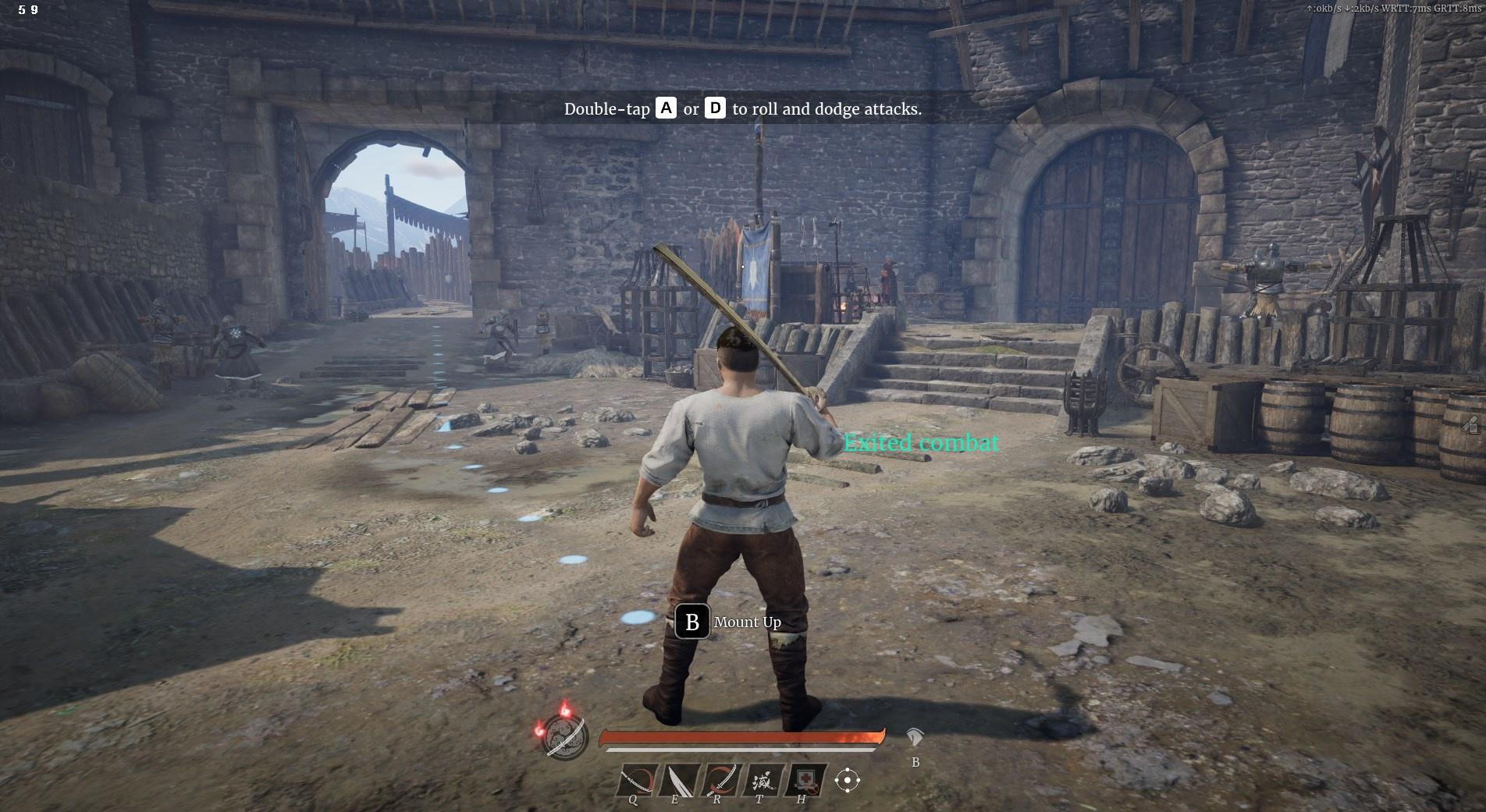 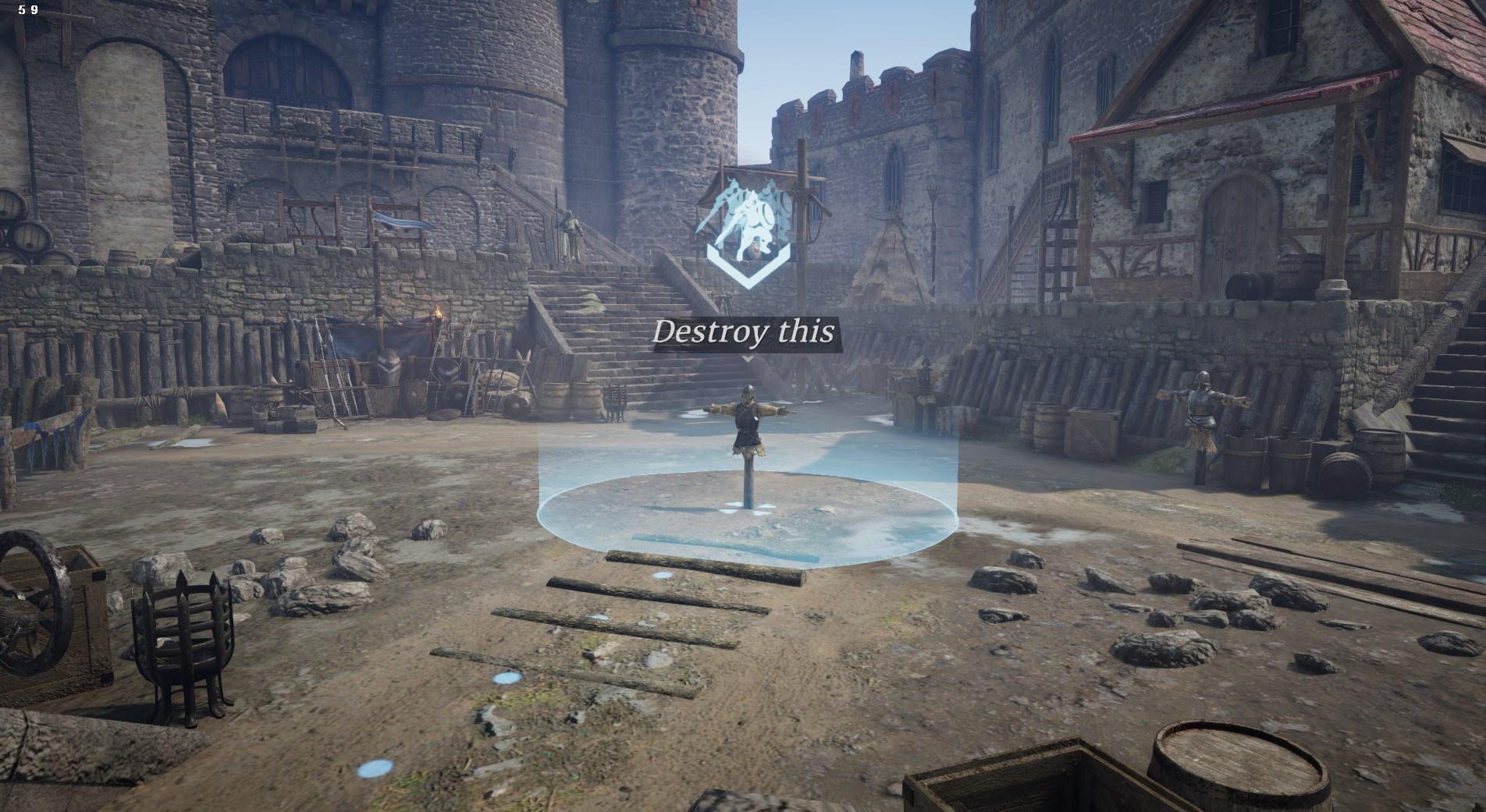 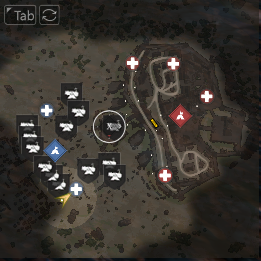 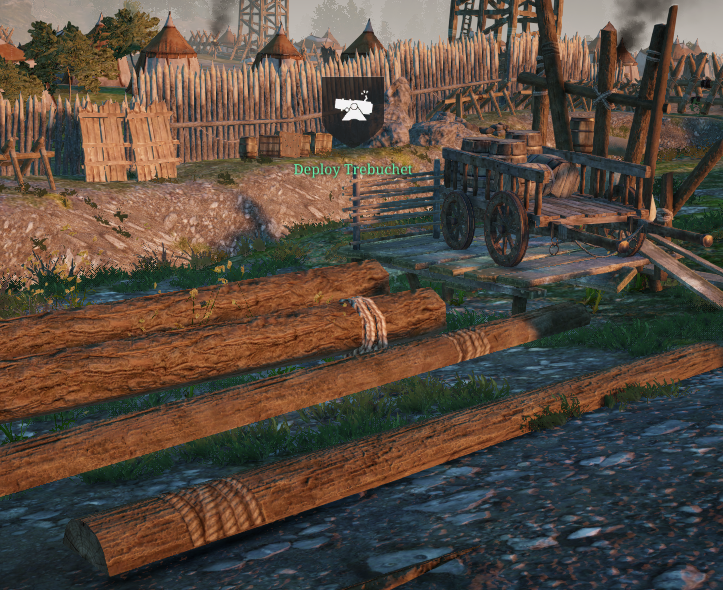 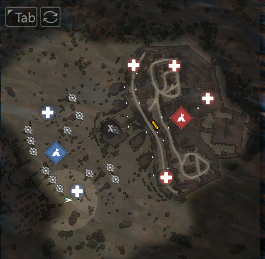 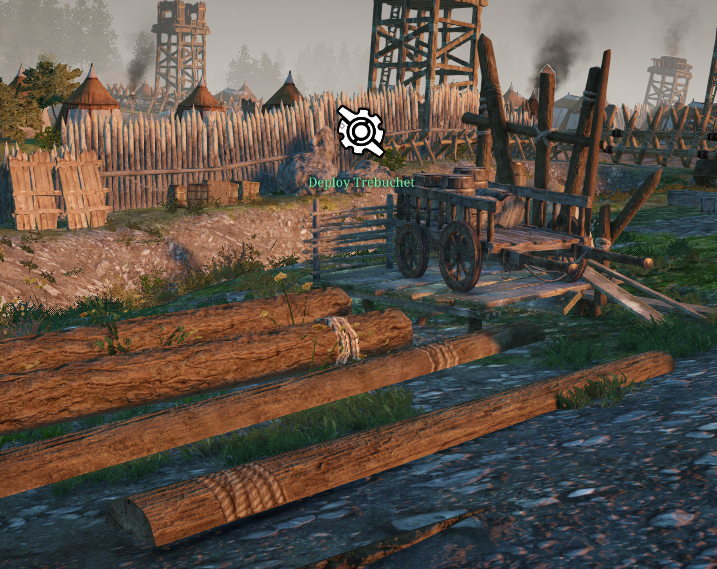 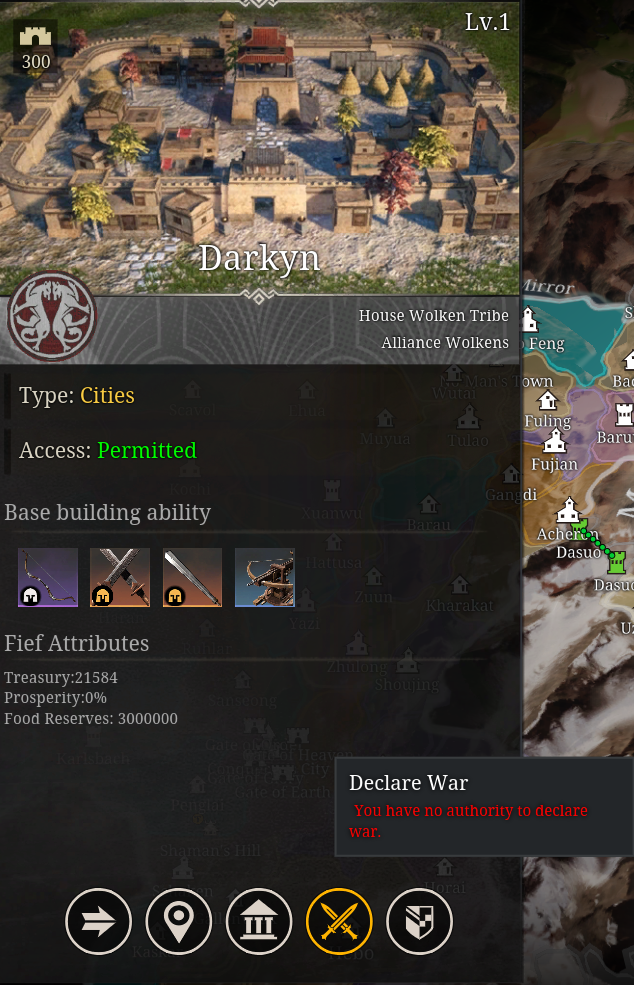 IMPORTANT: Starting with the launch of Season IX: Tyranny, only Season launch Patch Notes will be translated into French, German, Spanish, Turkish, Polish, and Russian, with weekly Patch Notes from throughout this Season and future Seasons being available in English only.

Having won some Fame, talk with the Quartermaster in any capital to access the Fame Store. There you may trade for useful items. (You must meet each item's fame requirement to buy it.)

You may earn fame in the following ways:

Matchmaking and PvE battles in the new season have a chance of rewarding 'Scattered Trophies', 'Box of Trophies', and 'Pile of Trophies'. These can be handed into the Quartermaster in return for fame with the rebels.

This Season’s Campaign is made up of 5 stages. The Borderlands is the core region of Season IX with the main objective being Conqueror’s City. If an alliance has ownership of Conqueror’s City, their ruling house’s liege has a chance to be bestowed the Hegemon title and all of their members will receive additional rewards.

We will be making changes to the 'Rune' system with Season IX: Tyranny.

Our original intention with the 'Rune' system was to expand upon weapon gameplay, so that Warlords using the same weapon differ from one another, giving the option of increased customization. However, during previous seasons, some runes have created an imbalance, whereas others aren't really used.

Owing to this, we began thinking about how runes are used and the future of battles in Conqueror's Blade. We selected the runes from the ‘Wolves of Ragnarok’ and 'Dynasty' seasons that we believe will fit the 'Tyranny' season and the theme of fighting in the 'Borderlands' the most. Once we selected the runes, we began adjusting their strength and energy. We hope that this new collection of runes will bring about a better overall experience and more fun! All runes you earned during Season VIII have been removed from your characters..

We will be making changes to the “Hero Specialization” system with Season IX: Tyranny.

Regarding Skill Pages. As Skill Pages' will no longer be needed to unlock skills, we will be returning all Skill Pages you have spent on unlocking victory skills during previous seasons and run a Skill Page exchange event. Check under Activities (O key) for what items you can exchange Skill Pages for.

During the Skill Page Exchange Event, players can change all previously spent and all currently owned Skill Pages to the following:

We'll be making a few changes to the Unit Tree to make it quicker to unlock a greater variety of units.

We've also changed the location of some nodes that were pre-requisites to units. See the Appendix for more information.

Once Season IX: Tyranny starts, “Personal History” and “Unit Training Plan” will be converted into “Scroll of Renewal” and sent to your Mailbox.

While Territory War gives rise to frantic and exciting battles, it has remained as a hot topic for negative feedback from the community. We have tried making changes to the mechanics and rulesets to resolve some of the more obvious issues. However, we have been unable to solve the core issues with simple patches. That is why we've decided to bring about a new evolution of Territory War with the start of this season, so that it may reflect the changes of current events as hundreds of Houses vie for power in Conqueror's Blade.

Since times of old, the word 'Prestige' has represented the achievements of one person or a group of people. In the short term, prestige is representative of a power's ability to influence, and its attractiveness to others. Whereas in the long term, it reflects the objective evaluation of this power's place in history. After much consideration and discussion, we've decided to make available the first new iteration of the Prestige system. It is our goal to have this revamped Prestige system play a crucial role in Territory War.

Since our implementation of having the Command House command battles, neither victories nor defeats have come with any direct negative effects. This obviously feels imperfect in comparison to how losing the defense leads to losing the fief entirely, and this has led to some malicious gameplay behaviours. As we're making changes to the Prestige system, we'll also be adding the following rules:

Declaring Too Many Wars:

If there is a change in strategic objectives after declaring war against a fief, or if a House knows they'll stand no chance, they have the option to withdraw from the battle.

It costs House Funds to build field camps. The cost depends on what type of camp is being built. There is a cap to the number of different field camps that can exist within a region.

If a House builds an Outpost in an area where they have declared war upon a fief, the Outpost will provide them with Prestige according to that fief. This will make it easier for Houses to gain command over battles against specific fiefs. Building field camps will not grant any Prestige bonuses.

House members can earn Prestige via pursuits and depending on their performance in pursuits during Territory War and its preparation phase.

Requirements for acquiring Prestige in this way:

There is a weekly cap for how much Prestige can be earned from pursuits.

When a fief owned by a House is upgraded, they will gain Prestige (based on its type and level) to reflect this.

When a fief owned by a House is degraded, they will lose Prestige (based on its type and level) to reflect this. If a fief is degraded as it switches owners, the original owners will lose the corresponding Prestige.

We have also changed the movement speed on the World Map overall to further improve the gameplay experience.

To reflect the speed changes, we have also adjusted the consumption and resupply of food.

War reports will be divided into House and player reports. The House report will include a report on House members who achieve great deeds, as well as fief battles and prestige changes. The player report contains information on each Warlord's individual situation and performance.

The war reports will be noted down by historians and presented after the Territory War finishes. You can find the House and individual reports by pressing J -> Territory Wars. However, reports are only retained for 24 hours before being burned. 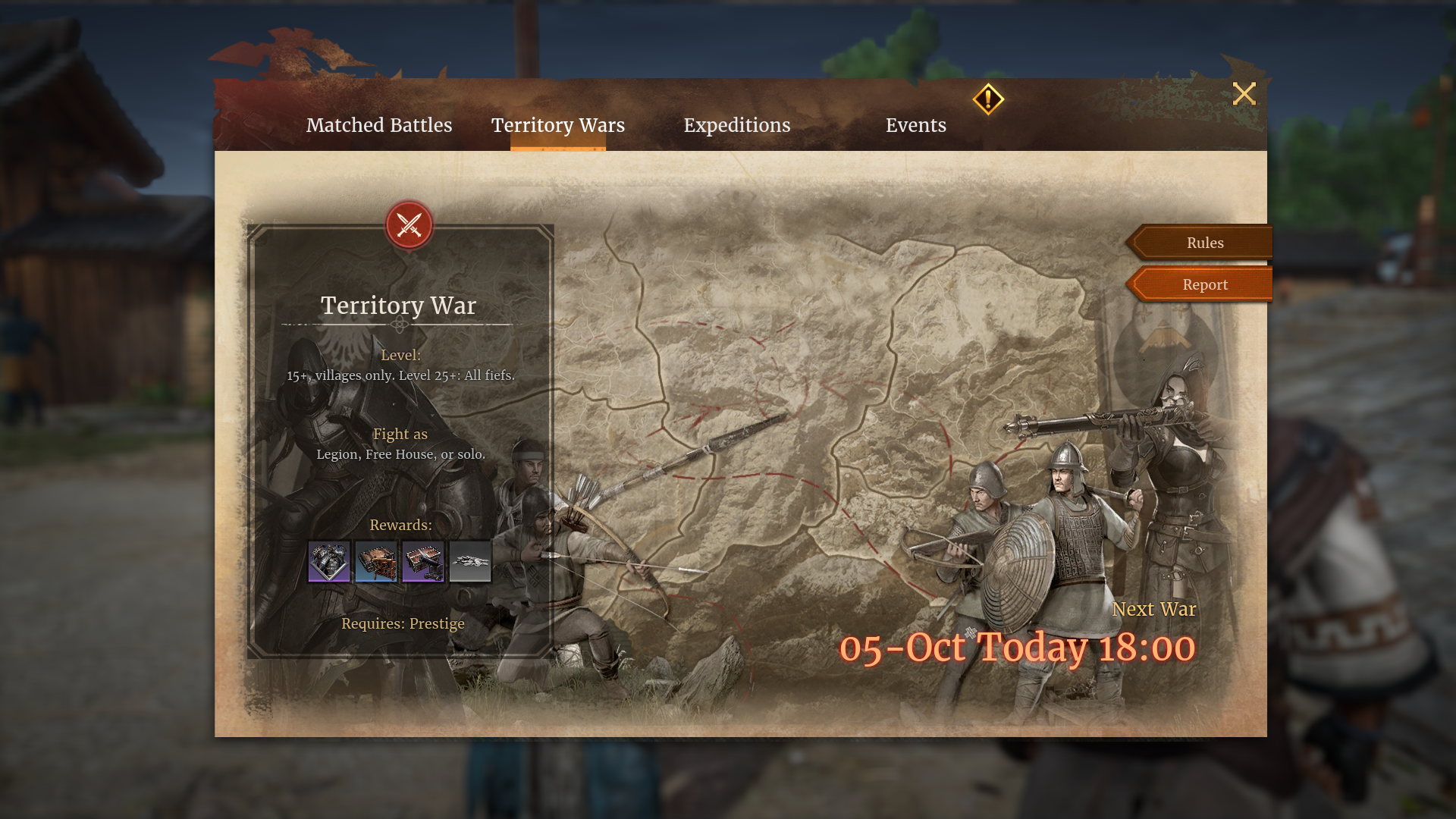 Currently, the duration of fief battles is fixed, which has led to long wait times. To improve the pacing, we want battle durations to change depending on the battle, so we're making the following changes: The duration will be split into two parts, “Initial Time” and “Reward Time”. “Initial Time” will be either 10 or 15 minutes depending on the fief size. “Reward Time” will increase the duration by 15 minutes when the attacker occupies the central point. No extra time will be added if the central point changes ownership again.

During the Territory War, NPC factions will gather their forces in what are called Assemblies. Once an Assembly ends, they will form an army and march on an enemy’s fief.

NPC factions usually initiate Assemblies in their own territory. If they no longer own any fiefs, they will instead Assemble in a neutral area. All players will be able to see the status, pathing, and destination of an assembling army on the World Map.

Once the Assembly finishes, the NPC faction's army will march towards the target fief. Players can attack the army while it is in transit. After such a battle, the army will gain either the Victorious or the Broken status depending on the results and gain protection for 200 seconds during which they cannot be attacked. (Some NPC factions will retreat upon being defeated instead)

NPC faction armies upon reaching their destination will begin forming up for battle. After these 90 seconds, the NPC faction will become the commander of the next battle at this fief. While ‘forming up’, players may attack and start assaults against their army. The assault will last until their ‘Forming Up’ status expires, but assaulting them will extend the duration of this status. If they are defeated while forming up, they will disperse and be unable to attack the fief.

If they are instead victorious in this battle, they will become the commander of the next battle of this fief.

All players belonging to the Imperial Restorationists will receive a notification when a special NPC faction is Assembling. Simply head to the World Map to take part. If a special faction has initiated an Assembly but it has not yet been filled, Imperial Restorationists can take part in that Assembly via the World Map provided they are not wounded. If the army is not up to full strength when the assembly ends, more NPCs will join to fill up the remaining spots before marching.

Players don't have to take any action during the march. Players may leave the army at any time, and other players may join if it isn't full.

Imperial Restorationists that are wounded in a pursuit attack will automatically leave the army. Once they have recovered, they can join an army that has room for them.

Imperial Restorationists that enter fief battles like this will automatically gain siege engines such as siege towers and battering rams which they can deploy during the battle. If the NPC faction's battle fails, the army will disperse for now.

We will be reclaiming all schematics you own with the start of the Tyranny season, and convert these into the new schematics. Check the Appendix for more details.

After these are no longer available in the Seasonal Store, the following can instead be gained as rewards from Hero's Journey and Battle Pass: Rare Armour Selection Crate, Treatise, Powdered Silver, and Lotus Water.

We will be moving attires and actions from the Hero menu to their own Customization menu. You can access this from either the Hero or Unit menus.

You will be able to check all of your attire within this new feature, and pair your favourite outfits as you like! 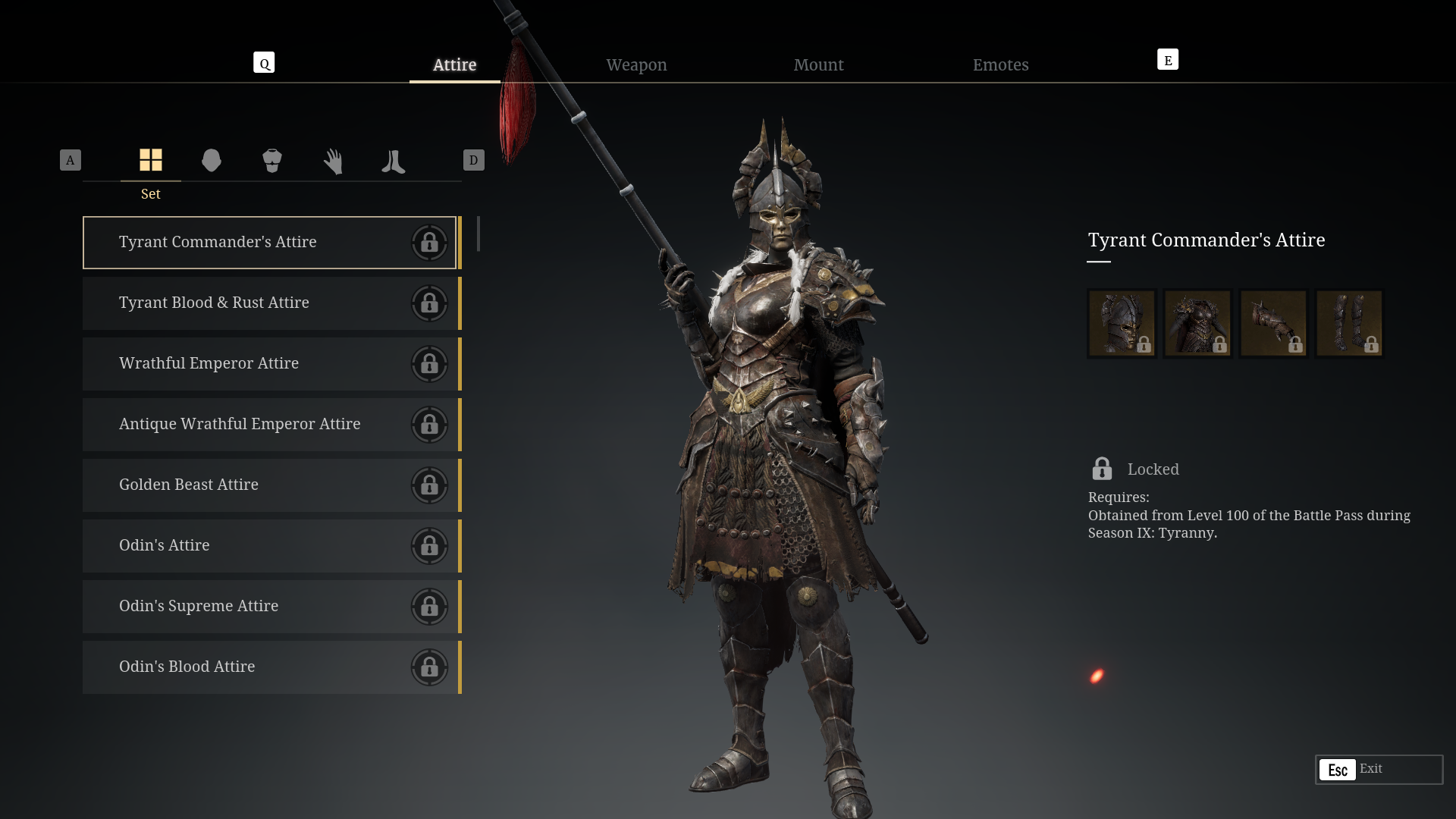 After receiving feedback and analyzing data, it has become apparent to us that the musket is somewhat too strong against units, which is why we are making some adjustments.

When Warlords using choke-type skills are interrupted mid-cast they will now be knocked down before rising again and no longer play the complete animation.

In Season VIII, certain skills that used blunt damage became more powerful than intended after benefiting from attributes and equipment bonuses. Changes are being made to the multipliers and skill damage values of some blunt based skills to bring them more in line with our expectations.

After analyzing data and receiving feedback from players, it has been determined that Warlords occasionally have a hard time surviving against units, which is why we are making the following adjustments. We will be closely monitoring these changes and will make further changes throughout the Season if necessary.