Bursting onto the rock scene with Tang Dynasty in the late 80s, Kaiser Kuo founded what is now known as “China’s first heavy metal band”.

Still very much into music - and strategy games-, Kaiser shared with us the fascinating background of his musical influences, the history of Tang Dynasty, and more as part of Music Week as we celebrate the musical history behind Season VIII: Dynasty. 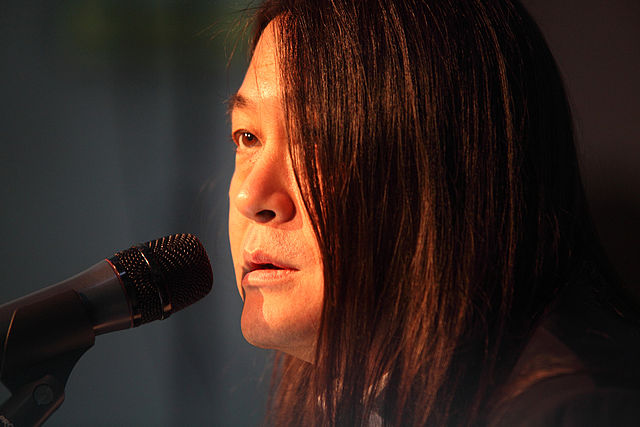 I hear you enjoy tactical games such as Total War: Three Kingdoms (and have an interest in Conqueror’s Blade); what is it about this style of game that draws you in?

I was a kid who grew up in the late 70s and early 80s playing Dungeons & Dragons and I’ve always just romanced on medieval warfare. I’ve always liked to collect swords and other weapons. I was, and still am, into archery. I also read a lot of historical fiction and Chinese martial arts epics novels like Romance of the Three Kingdoms which is just an absolute classic and all about strategy and warfare. As soon as video games became available, that’s what I was focused on, back when I had a monochrome monitor and an IBM PCjr in 1982. I was playing this game called The Ancient Art of War, and it’s always been that for me. I never really got into the shooters.

Conqueror’s Blade looks fantastically interesting! I do like a bit of action.

Tell us about your early life - we’ve already covered how you got into gaming, but how did you get into music?

Well, like all American-Chinese I was compelled to play (well in my case it was really voluntary) piano, and also violin. I moved to cello when I was in sixth grade, which sort of got my hand stretched in the right kind of parameters for guitar. When I moved away from where I grew up in upstate New York when I was 12, we didn’t have a string orchestra in my new school so I gave up cello - didn’t want to lug that thing around anyway - then picked up guitar. I had a friend who was quite a good guitarist already when we were in seventh grade and taught me my first few licks, and I borrowed a guitar from another friend who stubbornly refused to acquire any ability on it, and just started playing. I was absolutely terrible until probably my Freshman year in college when I started taking it a little more seriously, and besides my studies, that’s really all I ever did. It was just guitar all the time.

I lived in a neighbourhood of kids where this was the new wave of British heavy metal, so I was interested in that, especially bands like Iron Maiden and Judas Priest. But before that, I was already deeply into prog. I was really into Yes and Emerson, Lake & Palmer (ELP). Also, Blue Oyster Cult was a really big influence on me, I absolutely adored them.

The latest season of Conqueror’s Blade is named Dynasty, influenced by the Tang era specifically, so obviously, we had to talk to the founder of Tang Dynasty! Tell us how the band came to be, and how it got its name.

In college, at UC Berkeley, my bandmates and I had this remarkable opportunity that fell into our lap in 1986 to go to China to play in the summer of 1987, and that fell through and it was entirely our fault. They really rolled out the red carpet for us and all we had to do was get ourselves there. But we were a bunch of students and we didn’t all have the resources we needed, and one band member made his own expenses too much for us to shoulder because he wanted to get insurable cases for his synthesisers and all this stuff so we ended up just abandoning that. I was bitter and angry and the band fell apart and I vowed that I was going to go to China and start my own damn band as soon as I graduated. So I did!

In the summer of 1988, I headed to China and met another American musician and let it be known that we were starting something on campus. Some Russian friends discovered this fabulous music store tucked away in a corner in Beijing so we headed down there and met the owner who introduced us to an up and coming musician who I ended up co-founding Tang Dynasty with a few months later. It was love at first sight, we became very fast friends and quickly started playing together. That very night we went to their rehearsal space, very drunk, and played all night in this Phillips factory on the western outskirts of Beijing. He was a natural, he was a metal guy, he was the only one who I’d ever seen in China. His basic rock licks were super solid but more than that he was into Black Sabbath and the harder Led Zeppelin stuff, and Judas Priest. That was the origin of Tang Dynasty, but it didn't actually come together formally until I had gone back to the states in the winter of ‘89 to grab more gear and entice my college band drummer to come to China after he graduated, and he ended up coming out and playing with us as well. But when I got back to China after that little sojourn, I was met at the airport by my friend, whose name is Ding Wu, and he told me that he'd been approached by a director.

They were going to shoot a movie about a rock band in Beijing, and we looked like a rock band (these tall boys with long hair) and he cast us for this movie. They gave us this fantastic rehearsal studio that was really nicely kitted out, and we had the run of it all day.

We were to write the soundtrack and an album's worth of material for it and, you know, be the band. So, of course, we needed a name and I had carried around the name Tang Dynasty in my back pocket for a while. I knew that that was what I wanted to call it because I had been coming up with this idea for what a Chinese heavy metal band should sound like, look like, and what thematic ideas it should carry.

Just as metal and hard rock [bands] in the West take their names or ideas from Tolkien, Medievalism, chivalry, and barbarism, it was natural for me to say “well, there’s a parallel”, there's something that resonates with every testosterone-filled Chinese boy, and many of the girls as well, and that is these martial arts epics and the great classics, and the battle and strategy filled books that we all grew up hearing stories about, so it was a natural fit.

Tang, in particular, had a real appeal, and that was because what China was experiencing at that time [1989], before the [events of ‘89], was an incredibly hopeful period where China felt like it was on the cusp of attaining greatness again, but it was a greatness that was derived by openness to foreign ideas, to a reevaluation of your own traditions, to culture from around the world - and that's exactly what made the Tang great in its time. If you ask most people “what was the greatest historical Chinese dynasty?” most of them would say it was the Tang. And if you ask them why, they would say, well, because the Tang was open, because it absorbed influences from around the world.

I thought that was very much in the spirit of what the times we were living in could be like if we continued to be open. That would, again, lead to a Chinese greatness that didn't mean you abandoned your Chinese-ness (the Tang certainly didn’t) or that you had to shove it in people's faces. I thought it was kind of an ideal.

Now at the same time, I thought that name and the look was a really good way to smuggle this alien form of music into a Chinese audience and make it intelligible to those audiences so that there would be some recognisably Chinese references, whether in the lyrics or the poetic traditions of China or in the actual musical stylings.

I knew that that was kind of a dangerous shtick. You could fall into self-Orientalism if you put in too many gongs or Chinese-y passages that weren't organic and authentic. We really had to hew to this idea that the music would have to be appropriate for it to have Chinese sounding passages. So that was the idea.

Do you still perform music or do you have any plans to do that again in a formal capacity?

I would love to, I mean, I dream about it constantly. I just woke up this morning from yet another dream where I was back with my old band and we were getting ready for a gig. Things were really strange. King Kong made an appearance. There were piles of dead apes at one point, it was just a terrible dream.

I'm always playing, and I want to very badly. I have musician friends here that I hang out with and we play stuff and record little things here and there.

Because of the lockdown, it's been hard to see anybody and I've been really busy with work. The other thing is that I've spent all that time learning a new instrument. I've been learning drums for the last couple of years. So that's what I've been doing, my poor family has to endure my ceaseless double bass.

Every season of Conqueror’s Blade is historically influenced. Last season was Vikings and Ragnarok, and now we're doing Ancient Chinese cultures. If you were to write a song for Season VIII: Dynasty, what would it be called?

Gosh, I mean, I would call it something like “The Walls of Chang'an”.

I love video game music. I think it's a chance for you to pull out the stops and do things that frankly would be cheesy on a standalone record. This is the only place where cheesy power metal and heroic-sounding themes would be really appropriate. With Tang Dynasty, we went for that.

Promotions
Power to the People!