Blades were bled, shields were shattered, and the first official Global Conqueror’s Blade League tournament of 2021—the Wolves of Ragnarok Tournament—was a rousing success! Across 36 epic matches played, 1,705 warlords were slain, over 63,000 units were sent packing to Helheim, and 1,159 artilleries were laid waste to.

Whether you were in one of the 16 teams fighting for legendary prizes and a place in an upcoming Tournament against Booming Tech’s own champions, a talented shoutcaster providing expert commentary on proceedings, or one of the thousands of supporters cheering on these mighty conquerors from the sidelines on Twitch: thank you. Many participants had to take time off, make special arrangements, or generally re-arrange their lives in order to join the fight, and their efforts resulted in a spectacular week of visceral, exciting combat that was a joy to behold.

And at the end of it all, one band of heroes stood above their fallen foes to claim the riches of Valhalla…

Congratulations to ENDGEGNER, a valiant team of warriors led by their captain Susnow who rose to the occasion to seize first place in the Wolves of Ragnarok Tournament! After fighting tooth-and-nail through four rounds against some of the best warlords in Conqueror’s Blade, this team can finally enjoy their hard-earned prizes, including the exclusive Odin’s Champion Hero Attire, a Champion’s Player Title, Sovereigns, Sunken Treasure Troves, Blades, a new weapon skin.

They’ve also won their place in an upcoming Global Tournament against the champions of the Tournament hosted simultaneously by Booming Tech. Stay tuned for more on that front! 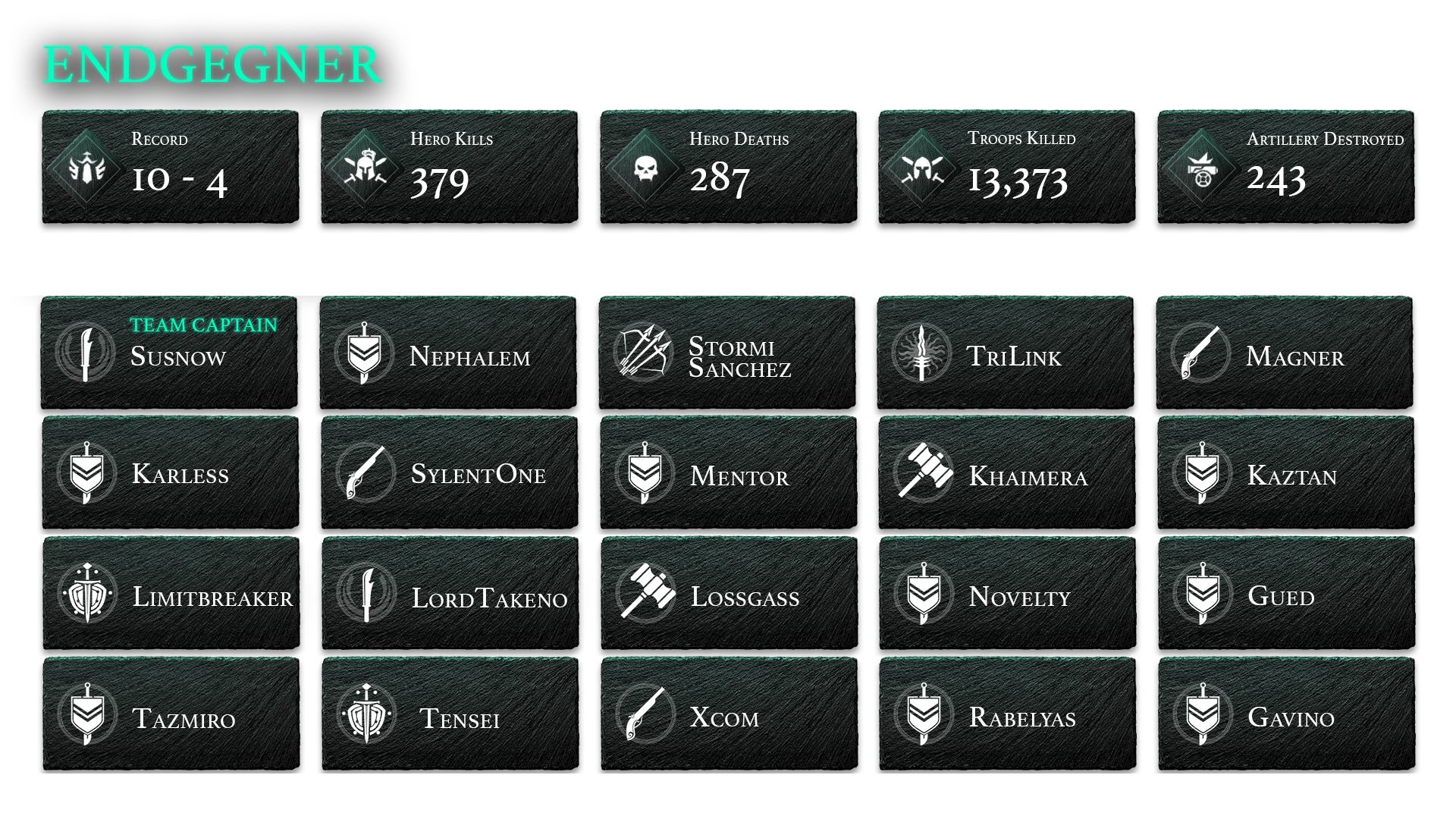 KeyboardWarriors stood toe-to-toe with ENDGEGNER in a nail-biting final. Team captain Varak described the fighting in the tournament as “the most fun we’ve ever had in this game in two years,” and though they just missed out on the glory of Valhalla, tales of their brilliance in battle will surely echo through the annals of Conqueror’s Blade history for years to come. Their special Runner-up Player Title and bundle of in-game goodies will also serve as a reminder of their accomplishment! 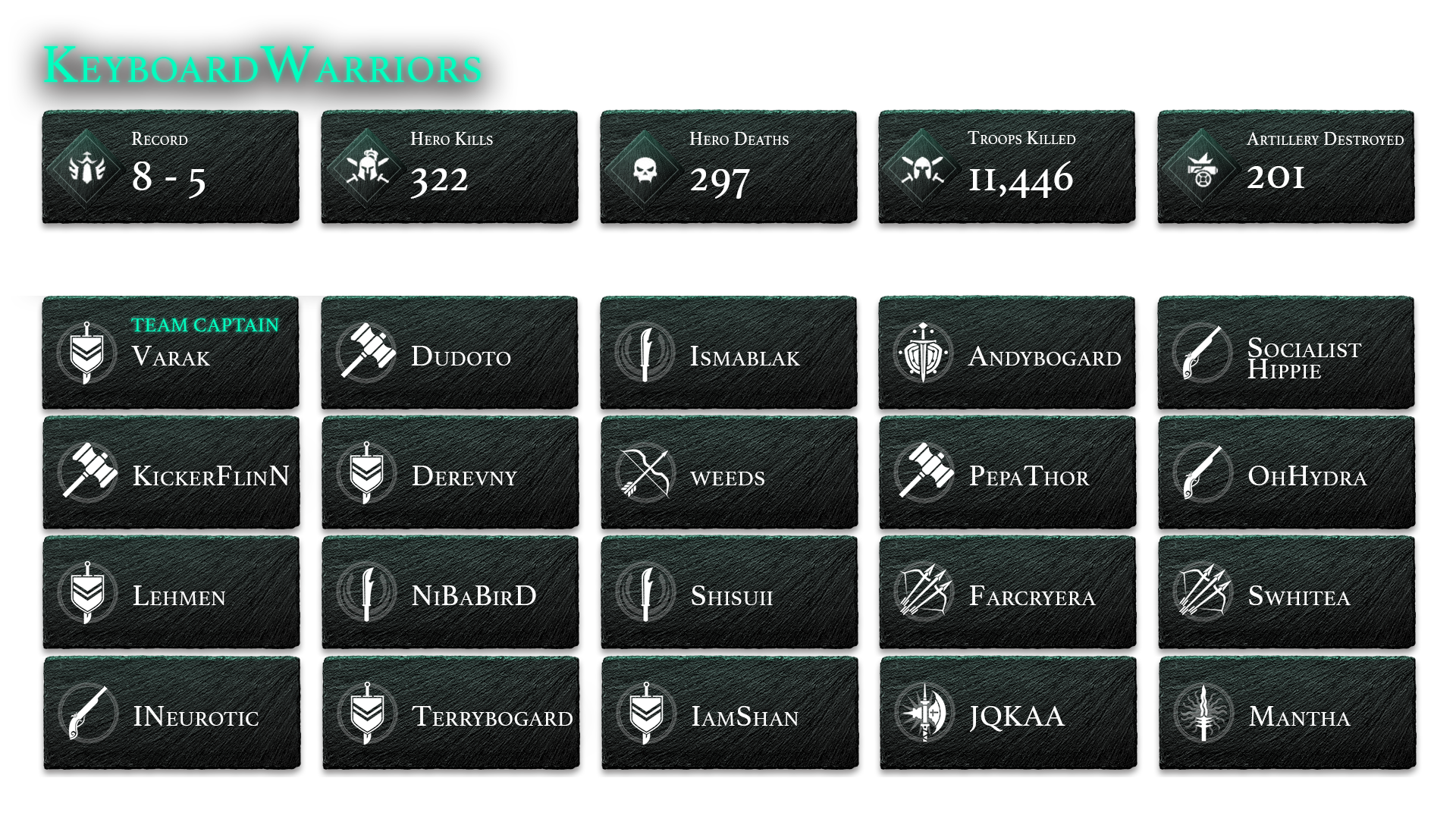 Plebs narrowly missed their place in the final but well and truly made their mark on competitive play in Conqueror’s Blade. “Overall the tournament was a great experience for the Plebs,” said team captain Templeshot. “It was nice to see tactics from other regions and compete on a high level with some very good teams. Seeing the 15 vs 15 team play with limited siege added a new aspect to the game that we don't see in normal Territory Wars.” Plebs walked away with an exclusive Third Place Player Title and a bundle of in-game goodies. Origin, LostLegion, Inglorious, Akatsuki, Agnar, Forsaken, Eden, BloodLust, Brotherhood, Unbroken, Wildblood, Wrath Of Heaven, and Pond Guard (click their names for detailed stats on their performance) formed a vanguard of teams who may not have reached the final three, but put up one Hel of a fight and provided hours of thrilling entertainment in the process. Each received a bounty of in-game rewards for their efforts and the satisfaction of being pioneers of the future of competitive play in Conqueror’s Blade.

Inglourious relished the opportunity to be a part of the Wolves of Ragnarok Tournament. “For a player that fought their whole life in competitive online gaming, this is a dream come true in Conqueror’s Blade,” said team captain sOuL. “Can't wait for the next one!”

“It was a lot of fun,” said Wildblood captain UhtridRagnarson, who vowed to return in the next tournament. “We know what we need to improve and we will try to do that too."

"Pond Guard thoroughly enjoyed both the organizational and competitive quality of this tournament, as did the rest of the NAE community that supported us despite in-game rivalries,” said captain MJV11. “We look forward to the new heights that future tournaments will reach and hope to grow with them."

The Wolves of Ragnarok Tournament was a shining example of how healthy and thriving a competitive community you have helped foster in the last two years of Conqueror's Blade. More than 70 teams signed up to participate, but only 16 made the cut. We fully intend to host more tournaments in the future, and when we do, we want to go even bigger so more of you have the opportunity to be a part of this. If you have any feedback about this tournament, please share it with our team via the Conqueror's Blade Discord so we can use it to inform and shape the future of esports in Conqueror’s Blade.

Follow Conqueror’s Blade on Twitch for more thrilling live broadcasts from the MY.GAMES team every week, and stay tuned for the ultimate showdown between our victors, ENDGENER, and the champions from Booming Tech’s own Tournament!