A golden age is coming to Conqueror’s Blade when Season VIII: Dynasty launches on July 8. This new season, inspired by China’s Tang Dynasty era, will introduce four news units from the in-game Qian Dynasty faction to reinforce your armies. Today, we’re going to take a closer look at a band of spiritual warriors: Cudgel Monks (3-Star).

There are many records of holy men and women waging wars throughout history in spite of their faith. Bishop Heahmund took arms in defence of Wessex and was struck down by Halfdan Ragnarsson’s Danes at the Battle of Meretun in AD 871, monastic military orders like the Knights Templar and the Teutonic Order were initially founded to protect Christian pilgrims, and the concept of warrior monks is a common element across Asian cultures. In Sikhism, a Sant Sipahi (meaning Saint-Soldier) is a Sikh who follows the spiritual and martial teachings of Guru Hargobind. In Japan, the Buddhist sōhei were an order of warrior monks born out of and sustained by, periods of imperial rebellion.

Perhaps one of the best-known examples of warrior monks is that of the legendary Shaolin Monastery in Dengfeng, China. The Indian Buddhist monk Bodhidharma was its first abbot in the early sixth century and is credited with training the very first Shaolin monks in what would become one of the world’s most famous martial arts: Shaolin Kung Fu. Though the monks led a largely peaceful, meditative way of life, frequent incursions forced their hand and often saw them fighting invaders off from Shaolin.

In the wake of an uprising and the assassination of the Sui Dynasty’s Emperor Yang in AD 618, the general and future Emperor Li Yuan attempted to retake the city of Luoyang, but soon found himself staring down defeat when his forces were wildly outnumbered by reinforcements. In the midst of the chaos and bloodshed, it was said that 13 Shaolin monks could be seen fighting off invaders in the heart of the city and helped turn the tide to an eventual victory for Li Yuan. The monks were honoured by the new Emperor of the ascendant Tang Dynasty, who granted them the rights to train their warrior monks and dubbed Shaolin a “supreme temple”. 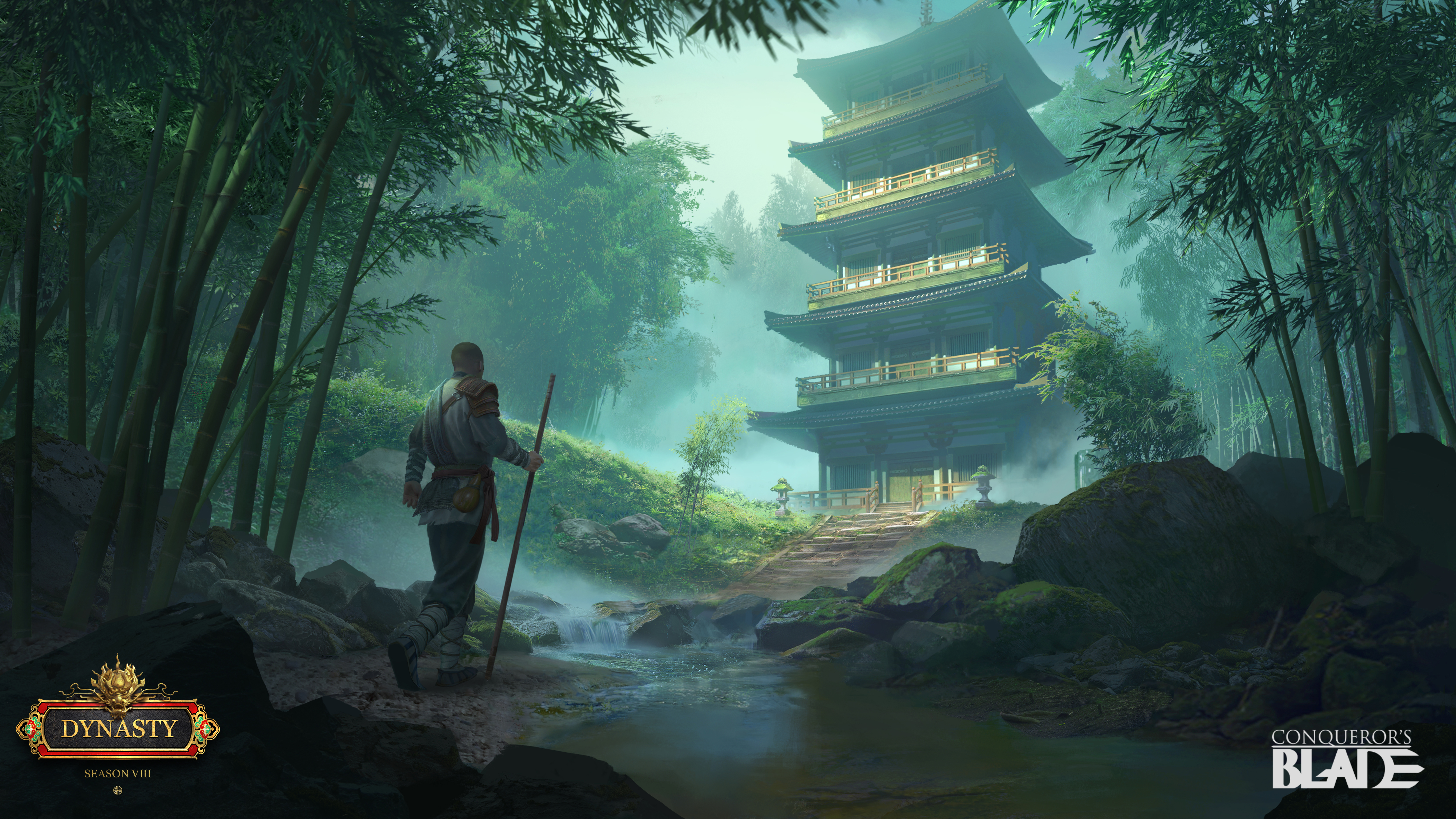 In Conqueror’s Blade, doctrines of harmony have long prevailed in the lands west of Hao Jing, but even a land as harmonious as this cannot enjoy peace forever. The Cudgel Monks, like their historical counterparts, are a monastic order of spiritual warriors who detest war yet fight when they must. These benevolent monks are said to be favoured by the gods and use their blessed martial arts abilities to safeguard those in need. When they come down the mountain and return to the world, they do so to eradicate evil and preserve good.

The Cudgel Monks dress in narrow-sleeved robes, are quick to act and are adept at using staves. Though not as sharp or daunting as a blade, their staves strike swiftly and deal considerable levels of continuous damage. Following a momentum-building charge towards enemies, the Monks can unleash a powerful flying kick to hit hard and break ranks.

Cudgel Monks function as a highly effective defensive unit. Though they lack armour, they have formations designed to avoid taking ranged damage and to make themselves into a tighter, compact unit; a smaller target that can hit harder when charging for a deadly strike. Their assorted traits are highly effective in hindering the enemy, too: while under attack, Cudgel Monks will gain defence points and refill their health every second; they can also deal additional damage to cavalry units while slowing said unit’s movement speed, and reduce all enemies’ movement speed with every strike.

Stay tuned to the official website and our social channels for more news on Season VIII: Dynasty before its launch on July 8! For further reading on the Shaolin monks, check out Learn Religions and Nspirement.