Ragnarok is here. Will you meet a warrior’s end and find your destiny in the Valkyries’ embrace, or will you send your foes hurtling to the ashen depths of Helheim? Embark on an epic new saga in Season VII: Wolves of Ragnarok, now available as a free update in Conqueror’s Blade!

The war for the North is won and winter’s grip begins to thaw. However, amidst the din of blades in bloody battles, something sinister has taken residence in the forest east of Vajk’s Lake. Strange lights dance in the pines, lupine howls scar the midnight air, and a rising tally of souls have been lost to the shadows of the glade. Here, the demented worshippers of the wolf-god Fenrir have amassed an army and set upon the land with a fierce vengeance as they seek to enthrone their leader as king.

All seems lost until a band of warrior Northmen takes arms to put an end to the madness of their traitorous kin. Armed with axe, shield, and the thunderous fury of the Allfather, you must set out to save the land from destruction in an all-new Campaign featuring new Seasonal Challenges, godly rewards from the Battle Pass, and a climactic battle for Turul Város. Begin your saga in one of two regions — Ostaria or Anadolou — and stop Ragnarok between now and June 17! 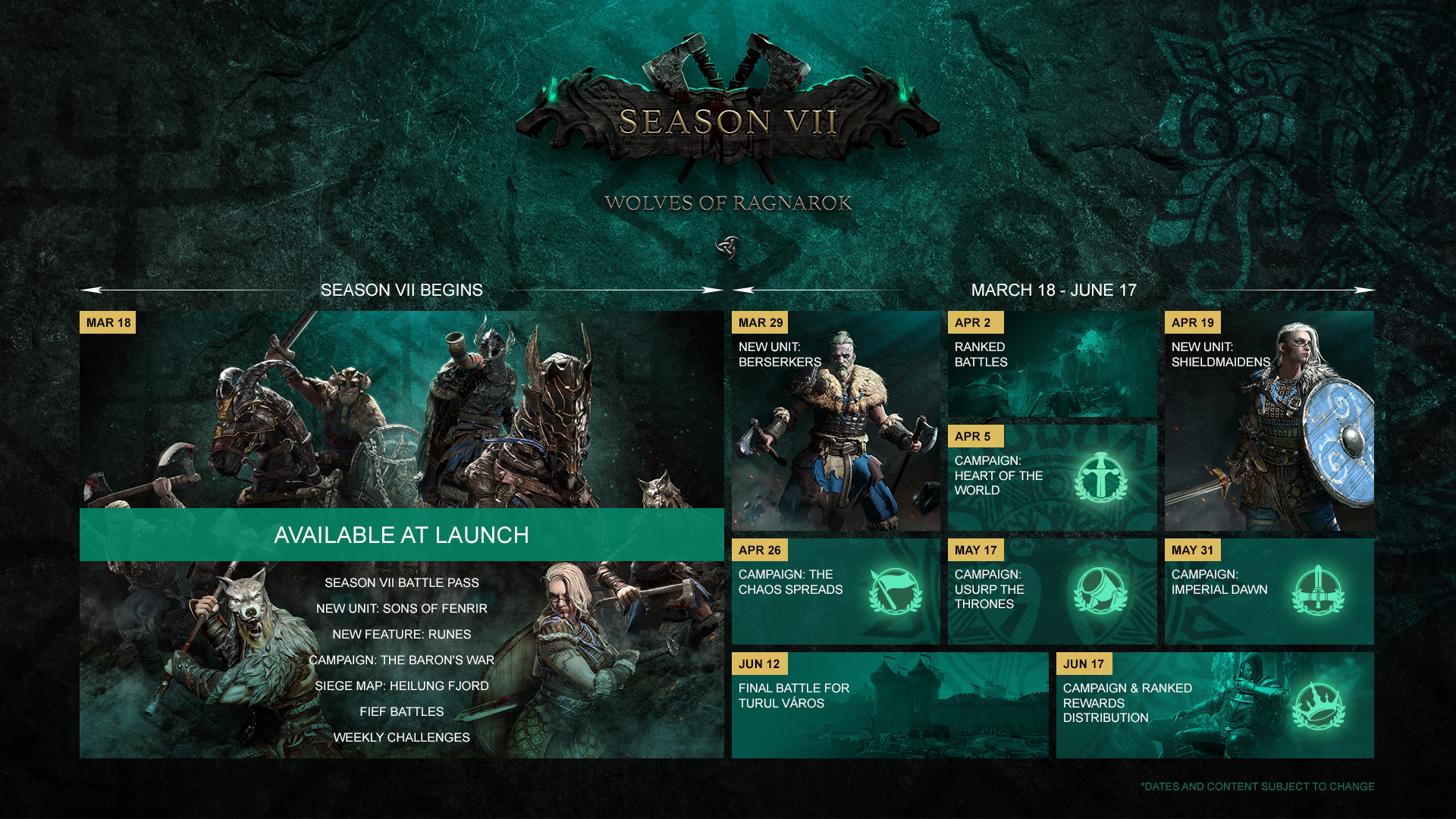 Meet your enemy in battle with the might of a new faction on your side: Northmen! Three Viking-inspired units can be unlocked by completing Unit Challenges throughout Season VII:

Let the Allfather’s thunder and fury spur your blades and engines as you defend or lay siege to a brand-new 15 vs. 15 Siege Battle map: Heilung Fjord! The map was inspired by ancient Nordic settlements and the stunning vistas of Scandinavia and named in honour of the Nordic band Heilung, who provided the soundtrack for Season VII’s cinematic and release trailers. Listen out to hear Heilung’s atmospheric music in-game, too!

Unlock new tactical and customisation possibilities with Runes, sacred artefacts that can be earned by raising your Seasonal Level (access them in the ‘Seasonal Runes’ tab after pressing ‘F5’ in-game). Attach them to your warlord’s weapon, helmet, and armour to improve attributes such as health, attack, and defence, and to grant other special bonuses. Unlike Weapon Skills, Rune effects are passive, so mix them up to create unique builds to suit your playstyle!

Complete Seasonal Challenges, amass Glory, and raise your Nobility Level to unlock the treasures of Asgard! The Season VII Battle Pass contains over 100 levels of Free and Premium rewards, including the Hel-bound Sleipnir’s Mount Attire, the battle-ready Tyr’s Warband Unit Attire, and the legendary Odin’s Hero Attire. You’ll also get Thegn’s Hero Attire as an instant reward when you purchase the Battle Pass from MY.GAMES Market, Steam, or in-game for 1,000 Sovereigns!

Even more rewards lie in wait. Express yourself with Thunder Clap and Folk Dance Emotes, and unlock one of 11 brand-new weapon skins from a Weapon Box — the rest can then be obtained by earnings and redeeming the seasonal currency Blades in the Seasonal Store. You can also redeem Blades to get antique variants of Attire not seen since the Season III Battle Pass!

Show off your style with Avatars and Frames! These profile-style pictures will represent you in places such as battle notifications, match lineups and leaderboards, and your Character screen, where Avatars can be seen next to your name and level. There are hundreds of potential Avatar and Frame combinations, and you’ll obtain more as you level up classes and units, collect attire sets, unlock achievements, and complete other various objectives. Be on the lookout for special Northmen-themed Avatars and Frames exclusive to Season VII!

We’re excited to announce that we’re expanding our world by welcoming Poland to the battlefield! Polish website localisation and payment support for Polish złoty on MY.GAMES Market and Steam are now available, and the Polish-speaking community can look forward to joining the fray when full in-game Polish localisation launches on March 30.

Conqueror’s Blade is available to download and play for free from MY.GAMES Store and Steam. For more information about Season VII: Wolves of Ragnarok, check out the latest patch notes and lore. Stay up to date on the game and Season VII: Wolves of Ragnarok by subscribing to the official newsletter and following Conqueror’s Blade on Twitch, Facebook, Twitter, Instagram, and Discord!