Season VII: Wolves of Ragnarok is coming to Conqueror’s Blade on March 18, bringing with it a tide of new units from the Northmen faction to unlock. To mark International Women’s Day, the first Season VII unit we’d like to share with you is an all-female taskforce of warriors armed to the hilt with shields, swords, and spears: Shieldmaidens.

Historians contest whether or not shieldmaidens were as prevalent in Germanic and Viking cultures as many believe. While making appearances in sagas and historical chronicles such as 'Hervarar saga ok Heidreks' and Gesta Danorum, the texts make clear that the heroics and deeds of figures like Hervor and Inghen Ruaidh defy the expectations of their gender. Nevertheless, archaeological finds like the Birka grave, a woman buried with weapons and board game pieces thought to represent strategic thinking, confirm the existence of high-ranking female warriors in Viking society. 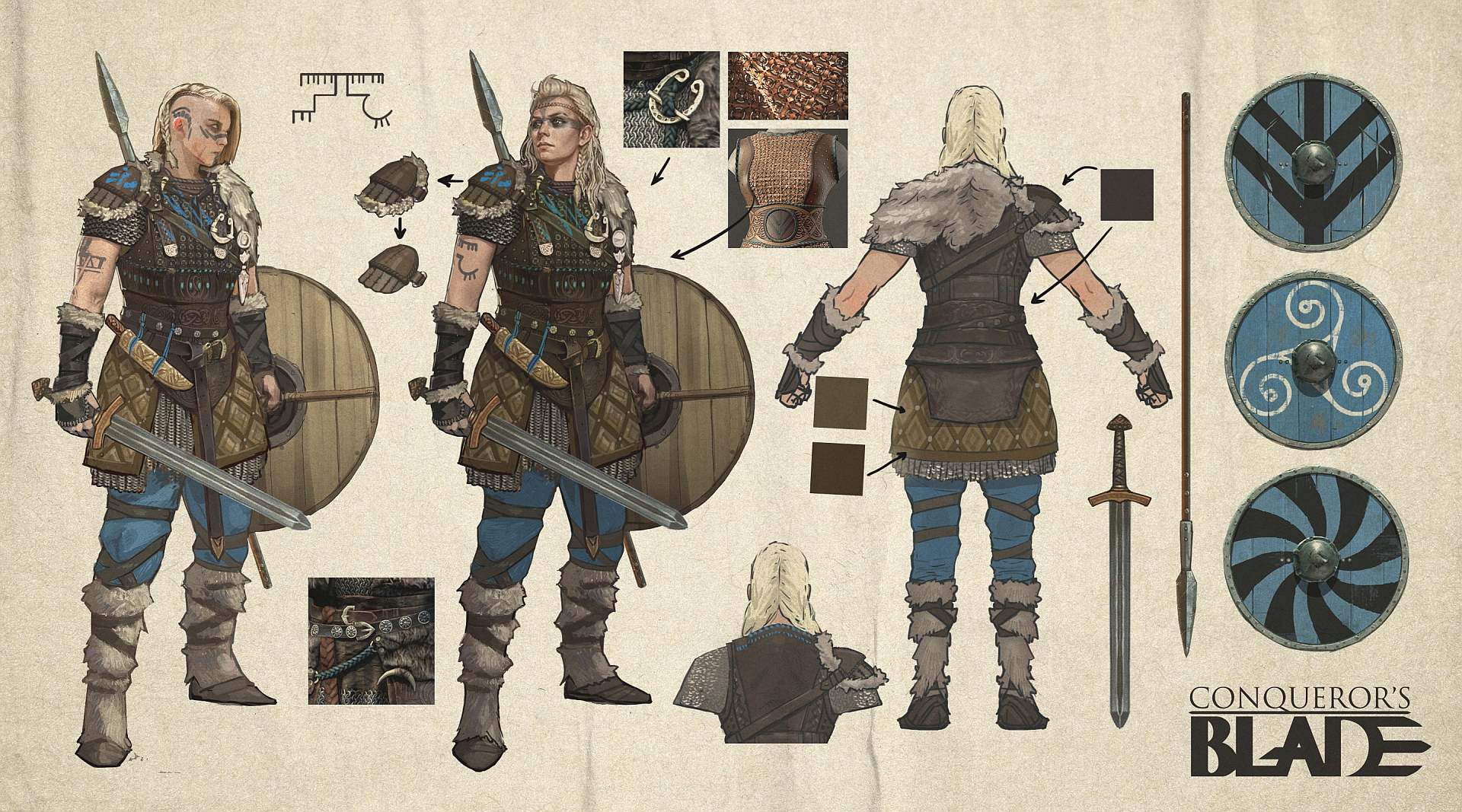 The reputation of shieldmaidens persists in Norse mythology, in which the legendary Valkyries were said to ride into battle on behalf of the god Odin. They would choose the warriors destined to die, then escort the einherjar to Valhalla and the hall of the slain. Reaching into modern-day popular culture, the legends and inspiration behind shieldmaidens have given rise to famous characters like Eowyn, the shieldmaiden of Rohan in The Lord of the Rings, Kattegat’s formidable ruler Lagertha in Vikings, and the Marvel Comics superheroine Valkyrie.

The introduction of Shieldmaidens was an important opportunity for us to make a great unit inspired by women in Viking and Germanic societies, who often enjoyed more rights and freedom than women in many other civilisations in the same era. We wanted to introduce a unit in Season VII that portrayed female warriors as a part of a militaristic society. They would be respected and feared in the same way as their male counterparts, raiding and battling in the same vein as brutal warriors.

In Conqueror’s Blade lore, Shieldmaidens are the armed wing of the Cult of Freyja, goddess of love, fertility, sex, war, gold, and magic. In peacetime, these women serve as bodyguards in the households of highborn families, and sometimes as guardians of sacred places such as temples, groves, or stone circles. On the battlefield they are like incarnations of the valkyries, fighting with sword and spear at the side of their leader. Legend has it that when shieldmaidens sound their battle-cry, their allies will follow them into even the most desperate melee.

Shieldmaidens are unique because they’re a hybrid unit, equipped with not only shields but two different weapons. You can switch between fighting with swords and spears to your tactical advantage, with spears inflicting debuffs on enemies and benefiting from a longer reach, and swords dealing more damage at a closer range. Spear-wielding Shieldmaidens are also especially effective against cavalry units. Ensure that you switch when necessary to adapt to your current situation!

In the spirit of the iconic shield wall tactic, Shieldmaidens can encircle their commanding warlord, and move while holding formation and offering excellent protection. When using this ability with spears equipped, the unit will maintain formation and defend, whereas equipping swords will make the Shieldmaidens act more aggressively if enemies get too close.

Stay tuned to the official website and our social channels for more news on Season VII: Wolves of Ragnarok before its launch on March 18! For further reading on Viking shieldmaidens, check out Sky History, and visit History for more information on life for women in the Viking Age.