With a sharp single-edge blade atop a long shaft, the Glaive is a weapon that combines the reach of a spear with the broad cuts and parries of a great sword. Though it lacks the weight of a Poleaxe, neither is it as slow or cumbersome, allowing the wielder to use the speed of their attack to harass heavy troops while carving apart those that are lightly armoured.

As well as decimating units in medium to close combat, the Glaive is an effective weapon against other heroes due to the user’s ability to wear heavy armour. Thanks to a selection of skills that allow the Glaive user to fulfil a number of battlefield roles, it’s a class that can face any opponent without fear. 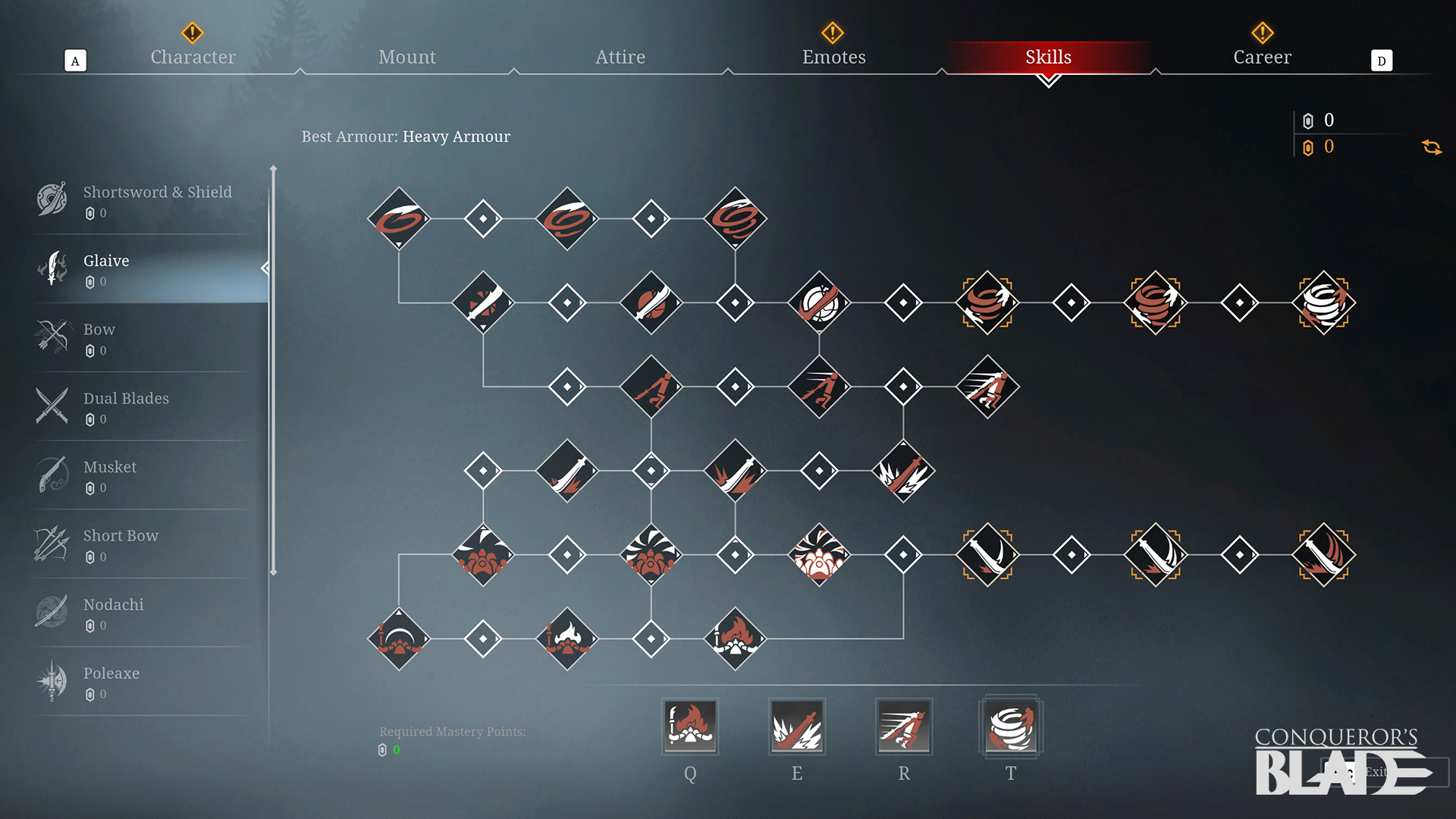 When it comes to advancing a Glaive’s attributes there are two schools of thought. The first says that you focus on Strength in order to maximise damage output. The other suggests that your Armour attribute requires the same degree of attention, especially if you plan to go toe-to-toe with other heavy classes like the Poleaxe. Certainly, if you are new to the weapon, leading on Armour will help with survivability, but as you progress it may be necessary to realign your attributes to make the most of your speed of attack and overall damage potential. 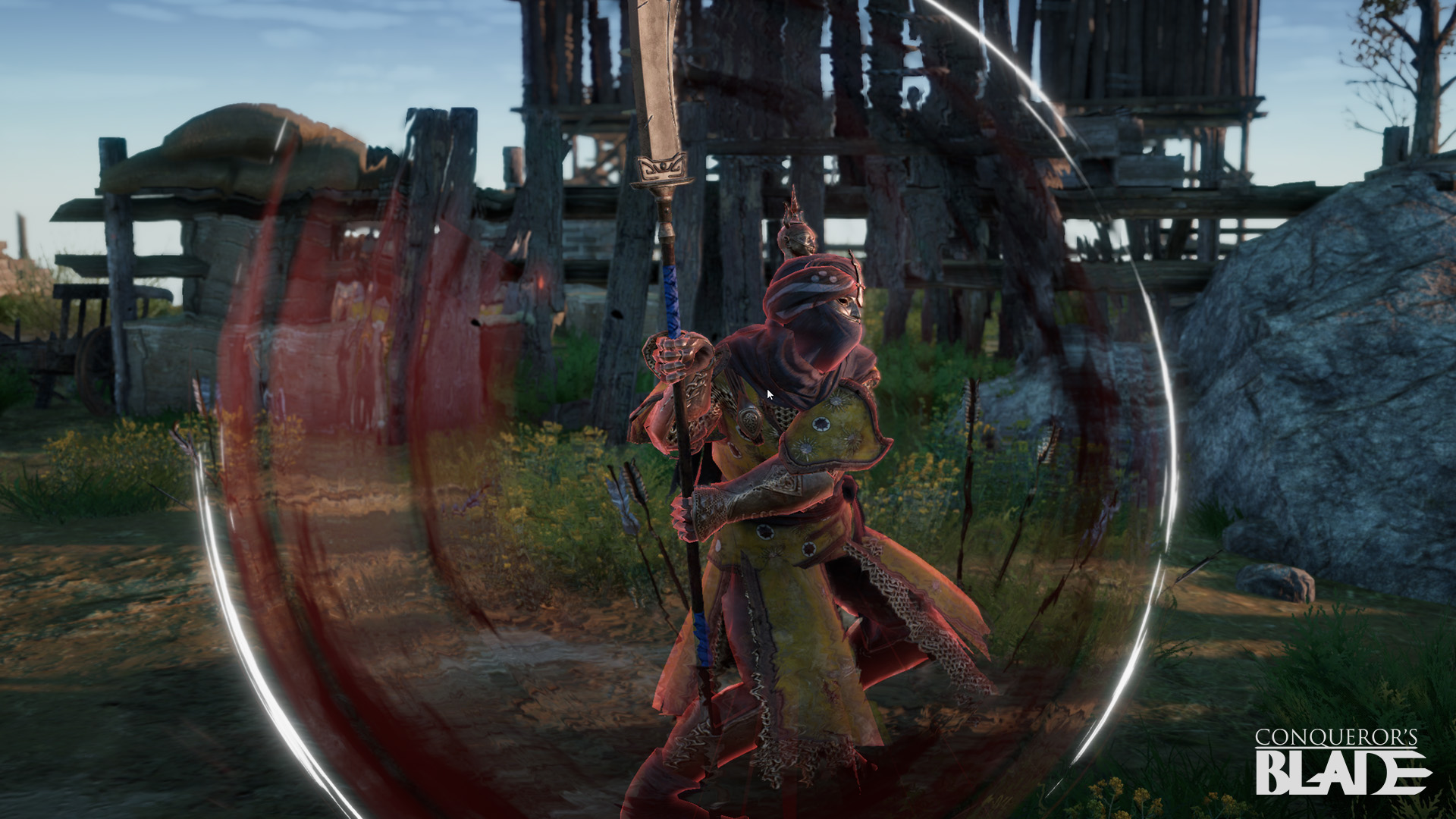 Despite being a weapon that excels at indiscriminately cutting through swathes of enemy soldiers, with the right selection of skills the Glaive can be deployed in a number of precise roles. The obvious one is as a traditional tank, drawing in the enemy and surviving the full force of its attacks through a combination of heavy armour and using crowd control skills like Arc of Steel and Hail of Blades while relying on Heat of Battle to keep yourself active in the fight.

A less obvious role is that of the front line assassin, using more direct skills like Charge and Breaker of Shields to take down specific enemy heroes quickly, perhaps in combination with medium armour to effect increased mobility. This would require a swift tactical retreat when the job is done or when the enemy numbers are too great.

In either case, one of the most effective skills that every Glaive player should consider utilising is God of Battles, which increases attack power by up to 15%, not just for the player but for any allied units that are close by. Activate God of Battles just before engaging the enemy and it could make all the difference when you follow it up with a suitably devastating Ultimate attack. 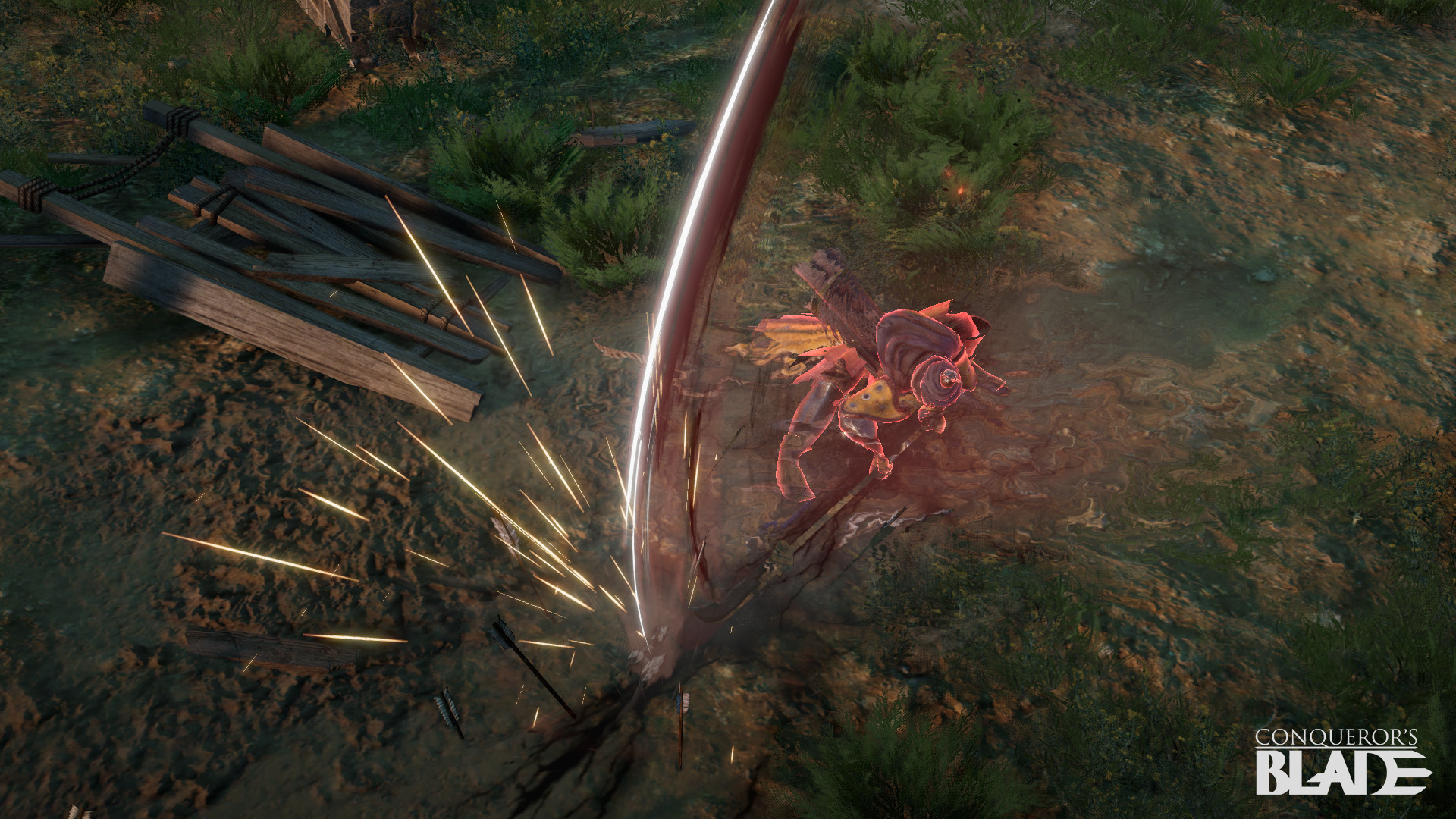 The two Ultimates Skills available to the Glaive encapsulate the dual role the weapon fulfils. Hall of Blades is most effective when dealing with multiple enemies, while the spectacularly devastating Flying Reaper skill better focuses all that offensive energy towards a single foe. As with all Ultimate Skills, both are powerful, but can only be used sparingly due to the long cooldown time. 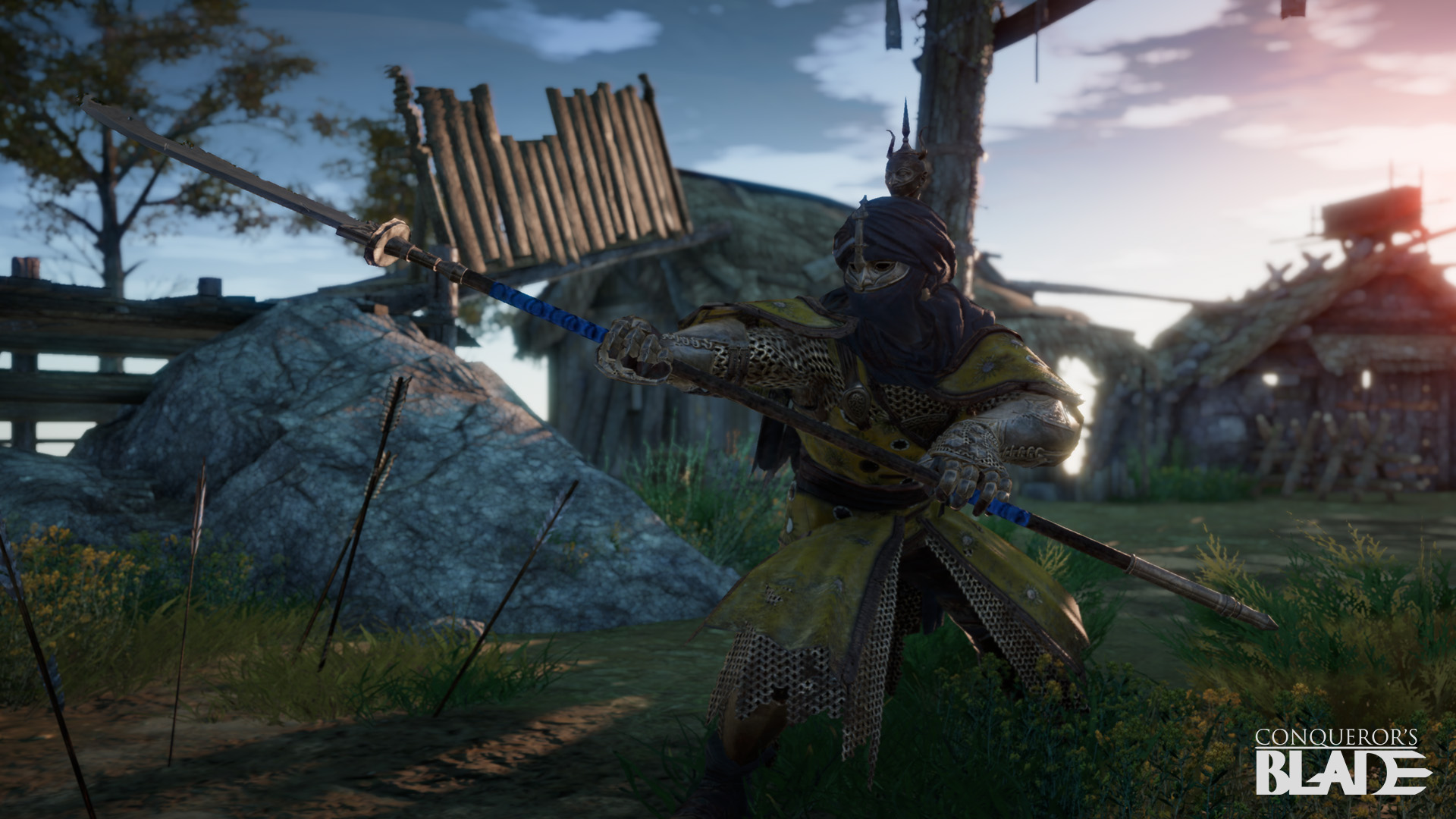 Being a front line brawler, it’s natural for Glaive players to want to stick with heavy armour, especially as the Royal Sentry heavy armour set has been forged with Glaive players in mind. With two pieces equipped, the cooldown for Warlord’s Greeting is reduced by three precious seconds (25%), while with four items equipped, if you hit more than seven enemies while using the Arc of Steel skill you’ll receive the Heat of Battle skill buff. Of course, to benefit from these bonuses, you need to have Warlord’s Greeting and Arc of Steel ready in your skill repertoire, which may not be the skills you tend to rely on.

A more versatile option might be to go for the Guardsman’s heavy armour set, which gives a 5% health boost (two pieces) or a 120-increase in defence stats across the board.

A third option, if you’re feeling adventurous, is to drop down to medium armour with the Carnifex set, with a 150-increase across all three damage types (2 pieces) or a 10-point boost to all basic attributes (Strength, Agility, Armour and Toughness) - equivalent to a level increase of 40. The downside, of course, is that you’re less able to remain in the fight. You’ll want to strike hard and fast and get out before the enemy knows what hit them! 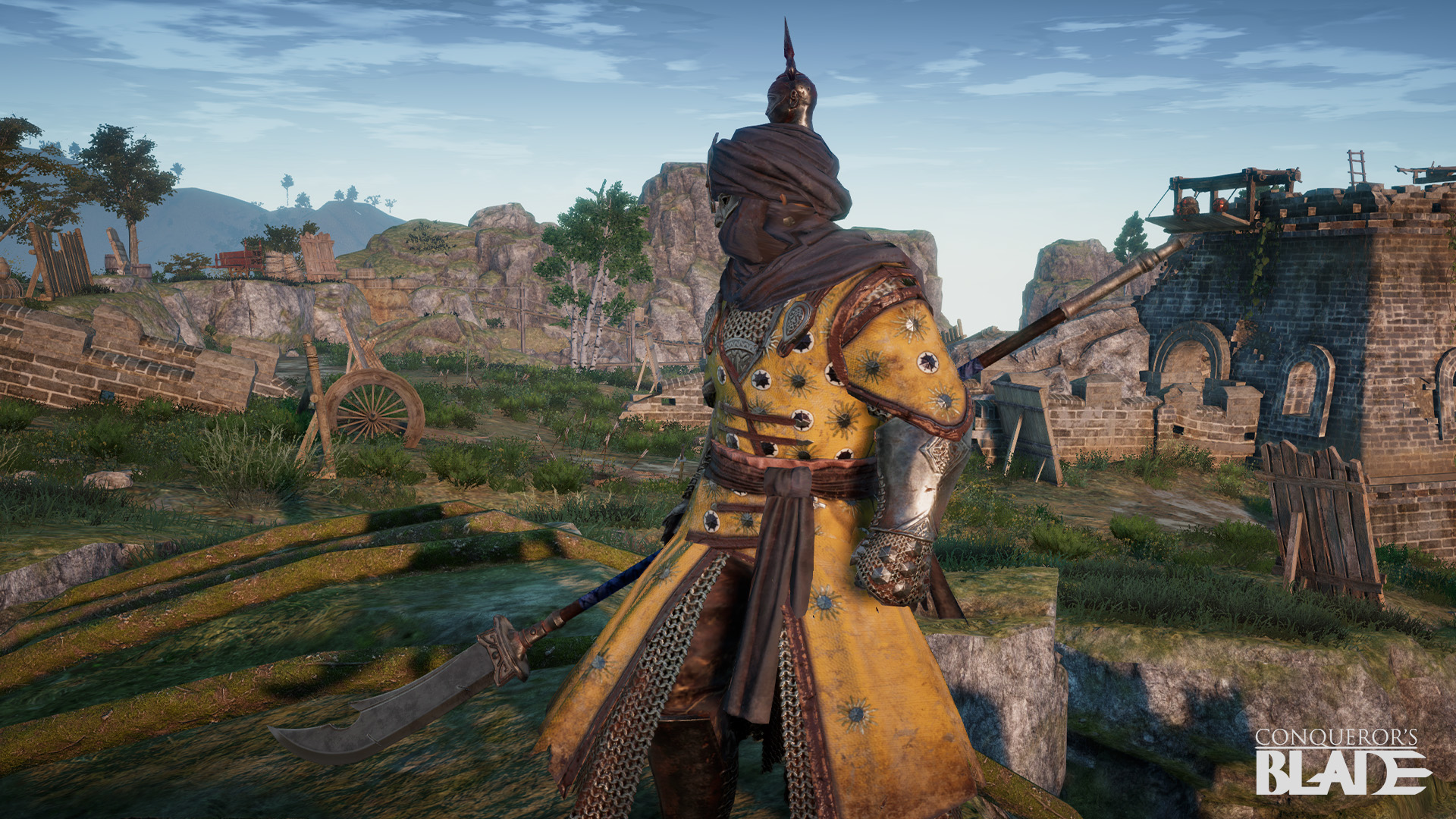 There are two types of Glaive that higher level players should be aware of, the Burner and the Eclipse. Both deal significantly more slashing damage than blunt, as all Glaives do, but the Eclipse (the shorter, wider blade) offers more of the latter at a cost to the former. The difference isn’t great, but as most players aren’t set up to deal with Blunt attacks, it might be the weapon to go for if you want the edge on your opponent and make the most of your Flying Reaper Ultimate skill. 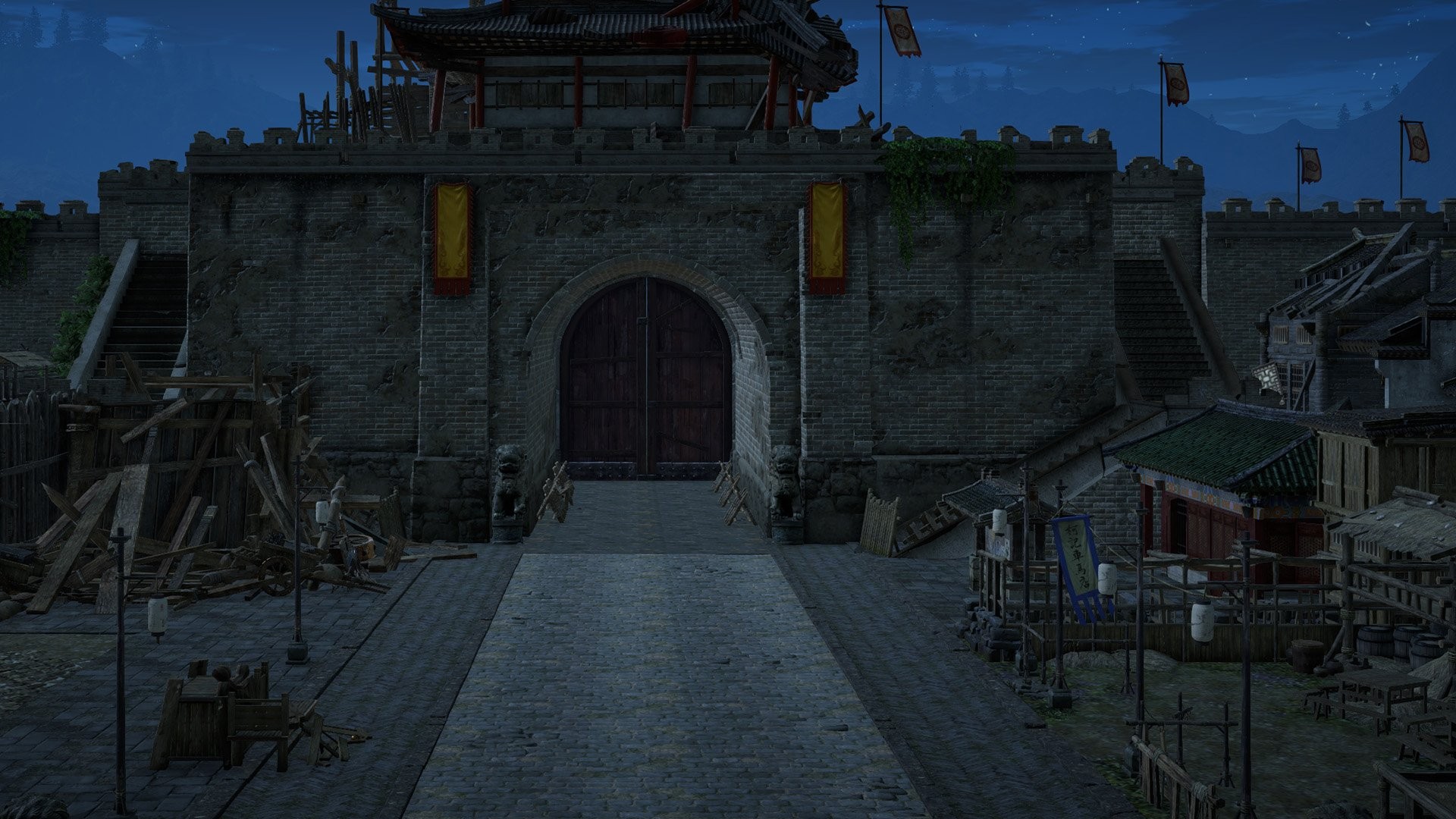 Fight with friends across new and adapted Expedition maps