With its sun-bleached mountainsides, fragrant olive groves and whitewashed settlements, the picturesque region of Anadolou has recently become a popular destination for warlords wanting to get away from the familiar lands of the landlocked north. Whether to seek out its ancient history, take a cruise along its celebrated coastline, or just to bring its citizens to heel, Anadolou is the perfect getaway destination for the gadabout general.

Being the southernmost region of the known world, Anadolou shares much of its border with Ungverija to the north. It is separated from its closest neighbour by the Hajlott mountains and the great Sea of Tranquility. To the east, the Southern Great Range rears up, within which lies an ancient mountain pass linking Anadolou with the Borderlands.

The region can be roughly divided into three zones. In the more temperate north is the peninsula separated from the rest of Anadolou by the Mortengis Sea and the Sea of Tranquility. It is here that that vibrant capital of Reginoplis is located, the region’s foremost hub when it comes to trade, culture and conquest. 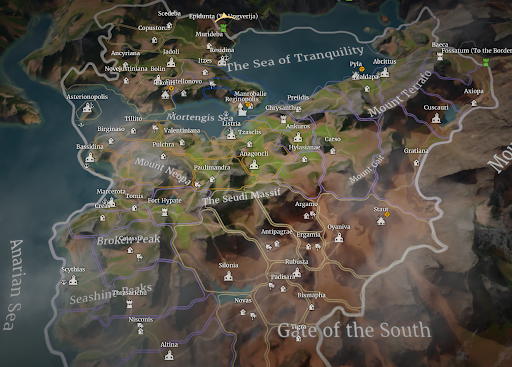 To the south, across the crystalline straits, the central plains are the most populous area in the region, home to the cities of Anagoncli, Bassidina and Ankuros. The rich arable lands are dominated by Mount Terrafo to the east and enclosed by a line of mountains extending from the Sedi Massif towards the open sea.

Finally, Anadolou’s southernmost expanse, with its mineral-rich soils and verdant forests, contains some of the region’s oldest tumbledown settlements, from Altina in the south to the picturesque (and often-under-siege) town of Axiopa on the shores of Lake Geropot - famous of course for its freshwater produce!

Cut off for many years at the behest of local warlords, Anadolou has only recently opened its borders to outsiders. There are currently two routes into the region: along the Isteni Pass linking the border town of Epidunta with Imre Kastély in Ungverija, and the more treacherous route from Fossatum in the east to Segnia in the southern Borderlands. Just approach the Empyrean Guard and he will usher you across the border. 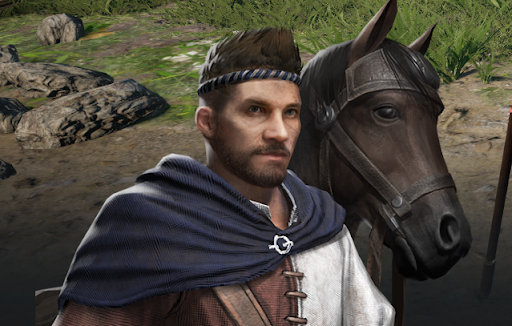 Despite its isolation from the rest of the world, the history of Anadolou has been remarkably well documented, thanks to the tireless work of scholars toiling in the great libraries of Reginoplis and Scythias. Recently unearthed texts tell of epic struggles, as the ancient Kingdom of Empyros attempted to unite Anadolou, the proud Symmachean Brotherhood leading the charge against the Sicanians that once dominated the region.

In more recent times, the self-styled Emperor of Anadolou, Sultan Fatih Suleyman IV, confidently marched on Reginopolis thinking the Sicanian defenders weak and disorganised. His creative attacks on the city (by land and sea), ultimately failed, allowing less conservative leaders to take charge and bring about a change in the region that made it more welcoming of outsiders.

The roads linking the various villages, forts and towns of Anadolou are as busy and as numerous as anywhere else, and just as likely to be crossed by roving bands of brigands and rebels. Visitors to the region should bring with them the means to deal with any unwanted attention and can expect to have to defend themselves from time to time - or pay the price. One mode of transport that is unique to the region is the ships that ferry troops and trade between the numerous port fiefs along the region’s coastline. Whether travelling alone or with a marauding army, you will need to hire safe passage to cross the sea beyond Reginoplis, or indeed to visit the picturesque city of Asterionpolis on the small island of Malta in the west.

Broadly speaking, there are two types of port settlement: Fishing Ports and Trade Ports. Both have the capacity to ferry a well-stocked army to a nearby destination, but in being less accustomed to military logistics, you may find fishing trawlers to be less reliable than transport ships. Disembarking at a Fishing Port from a Trade Port isn’t an issue, but when you set sail from a Fishing Port, you can only sail to other Fishing Ports and items could be lost in transit from your wagon and Unit Kits may be damaged. This makes Trade Ports important strategic locations (as well as the cities that service them), so if you are aiming to successfully wage war in the region, having access to Trade Ports is essential.