Long ago, there was a king who sought to restore glory to his once-mighty realm. With fire in their hands and war in their minds, his army of knights sowed desolation across a beautiful land, and stoked a fire that rages to this day. Ignite the fight in Season V: Legacy of Fire, a free expansion available now in Conqueror’s Blade!

Journey into the distant past and follow the Kingdom of Empyros and their grand militia, the Symmachean Brotherhood, as they embark on a doomed campaign across the land of Anadolou. All players will start Season V in lands anew and eventually discover this stunning new region. The first to be introduced since the launch of Conqueror’s Blade, this region provides the theatre for Territory Wars, a bi-weekly event where players can fight for control of the land.

JUMP IN AND FIGHT

With Season V: Legacy of Fire, we’ve made it easier than ever for new warlords to start their journey. Tutorials have been thoroughly revamped, offering even more in-depth training, tips, and an early opportunity to get stuck into a proper siege battle! Additionally, the heavy-hitting Maul is now available to wield from the very beginning, bringing the total starting weapon classes to 11.

Starting the game for the first time in Europe? Join the Empyros (EU4) server to start the fight on a level battlefield! 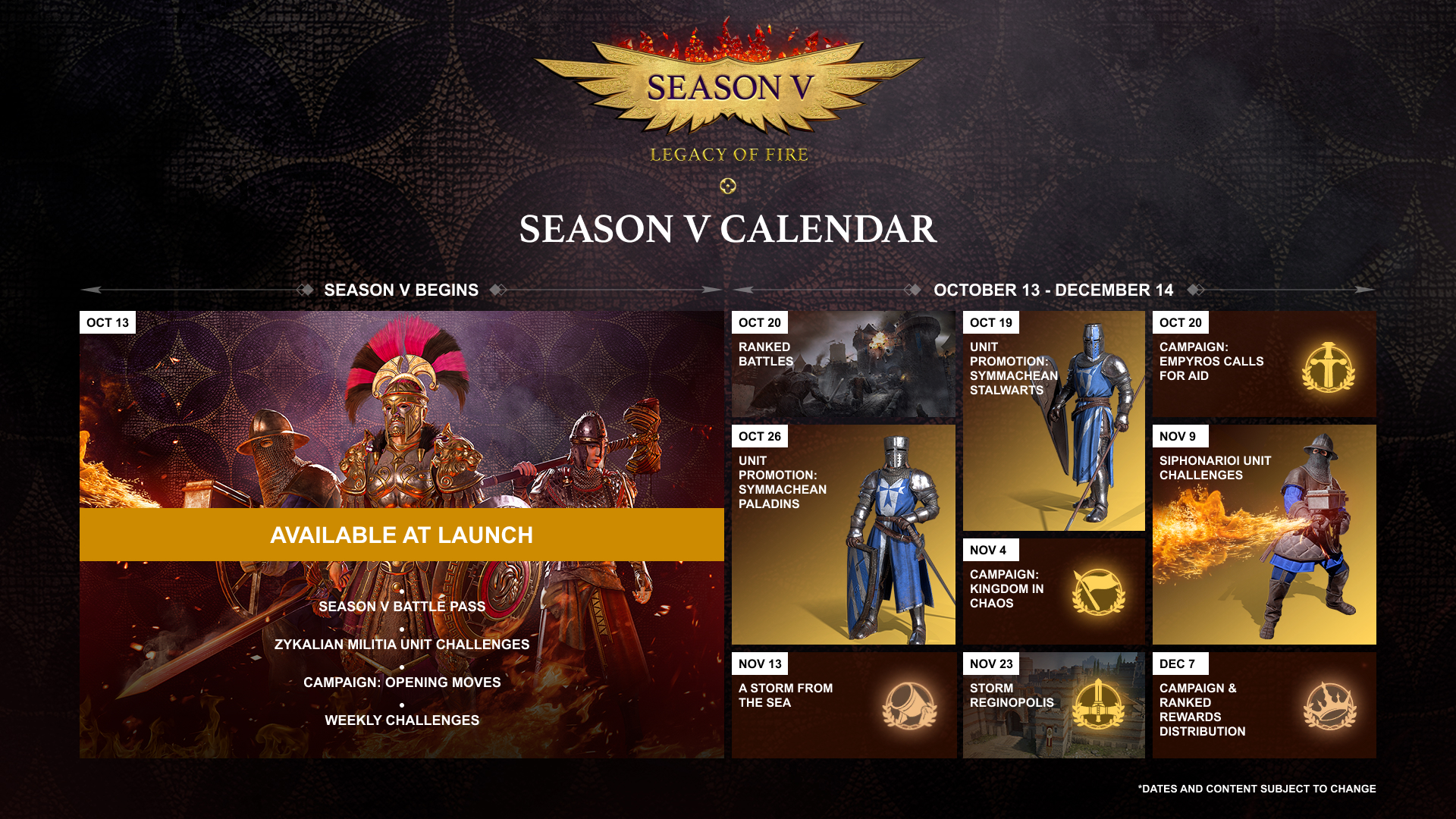 BLAZE THROUGH A NEW SEASONAL CAMPAIGN

Battle through time and flames as you embark on a new Seasonal Campaign packed with challenges and rewards. The fight will eventually culminate in the storming of Reginopolis, the capital of Anadolou and the future crown jewel of an almighty empire.

Two new units can be unlocked via Unit Challenges over the course of Season V. These warriors wield weapons fuelled by hellfire, an incendiary liquid developed by alchemists in the Kingdom of Empyros. You’ll have to adapt your battle strategies to attack with and defend against fire!

PROMOTE UNITS TO THE SYMMCHEAN BROTHERHOOD

Don’t leave your old guard by the wayside! You can promote select existing units to the prestigious ranks of the Symmachean Brotherhood. In their newly-revamped state, they’re even more formidable. Find out how to access them later in the season! 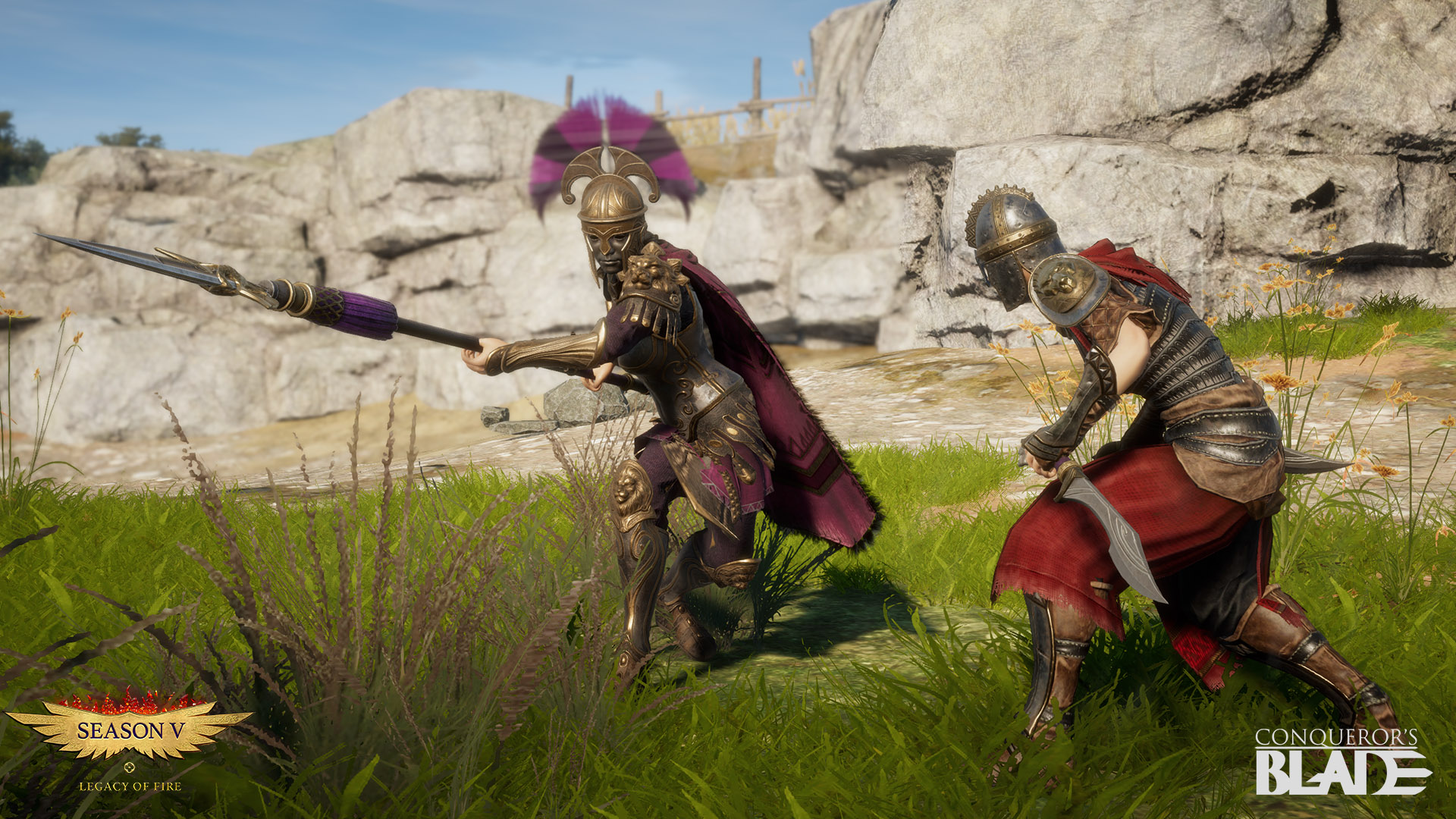 Fight, rise through the ranks, and earn epic loot in Season V: Legacy of Fire! Get the Season V Battle Pass from MY.GAMES Market or Steam for access to 100+ levels of exclusive rewards. Instantly unlock the noble Vigla Guard’s Hero Attire when you start your Battle Pass at level 1, set the battlefield ablaze with Vardariot Unit and Horse Attire, express yourself with four new Emotes, and take aim at the mighty Strategos's Hero Attire at level 100.

You can also collect Hero Tokens from the Battle Pass and redeem them in the Seasonal Store for 11 new weapon skins worthy of the Symmachean Brotherhood. New to Season V, Chalices can also be earned and used to obtain reborn classic cosmetics! Redeem Chalices for new versions of fan-favourite Hero Attire, Horse Attire, and weapon skins that haven’t been available since Season I.

Rage through the flames of history in Season V: Legacy of Fire, available now as a free update for Conqueror’s Blade. For more information about this update, check out the latest patch notes and explore the lore of Season V. If you want to keep up to date with the latest news throughout Season V, subscribe to the official newsletter and follow Conqueror’s Blade on Twitch, Facebook, Twitter, Instagram, and Discord!