To help new warlords grow stronger we have prepared a login-event. New and old players alike can claim rewards by pressing “O” and selecting “Activities”. The rewards include:

The choice of units only contains those which can be unlocked by Honour.

Introducing a new Doctrine system: Seasonal Doctrines, these Doctrines are easier to come by compared to common and rare Doctrines which can be excavated from the War Scholar. The differences between these are normal Doctrines are the array of new abilities they contain along with their short usage times. Things to keep in mind:

Similar to Nobility Titles exclusive for Free Houses, Imperial Restorationists will now be able to get titles for their respective Legion, the titles differ depending on the land the Legion resides in.

How to obtain Martial Titles:

The Acclaim system for the Imperial Restorationists has been upgraded.You can earn acclaim by participating in Territory War and achieving combat objectives set by the Legion of your region. Your Legion will also gain influence depending on the amount of fiefs owned by your legion. Both of these points will be added together to give you a ranking and depending on that ranking you will receive a Martial Title.

Please note: Some Martial Titles can only be distributed to a set amount of warlords, these are distributed based on ranking, if two warlords have the same rank it will be given to the warlord with the higher Acclaim.

Martial Titles are granted every week at 2am CEST on Sundays (5pm PDT on Saturdays) , if you fail to meet the contribution point and faction point requirements, you will be demoted in rank. Completing weekly combat quests will grant basic rewards and advanced quests will grant additional rewards.

These titles are only available if you are part of the Legions which are in Ostaria or Ungverija, they are ordered highest to lowest:

These titles are only available if you are part of the Legions which reside in Liangyun or Maoyang, they are ordered lowest to highest in rank:

Deployed Season III Interfaces, players can access Season III by heading to the top of their navigational bar or by pressing F5. (Players must be level 20 or above to access this interface).

Optimised cooldown for skills that had multiple steps in their attacks.

Skills that have multiple steps of an attack by repeated button-pressing had relatively long cooldowns, which were made even longer when then the skills were terminated or interrupted. Due to this, we have adjusted the cooldown mechanisms for these skills so they provide a better experience.

We have reduced the cooldown duration for all skills that have multiple attack steps, the cooldown will start every time a step of the skill is cast, so you will no longer need to wait for  a long amount of time when the skill is interrupted.

We have found that the effects for some sets were lower or higher than we wanted them to be, so we have made some adjustments for Season III. We changed the effects of the 4-piece sets for the following sets and effects:

We received a large amount of feedback from players during Season II regarding cavalry being the main units players used to dominate the battlefield. In ancient times, cavalry were central to winning battles in open-areas as they had advantages such as improved mobility.

We found that cavalry were able to dominate the battlefields regardless of terrain in all modes, whether that be Free Battles, Territory War, or standard Matched battles. Cavalry would repeatedly crush most unit types, except anti-cavalry units such as spears and pikes in narrow-areas. After reviewing your feedback and looking through information collected from the game we have identified issues with the overall design of cavalry units, such as their abilities to change their initial speed and course, being unable to be stopped by most obstacles and being able to reach top speed within narrow-areas where they had a small field-of-view. Due to these issues, we have decided to make the following changes:

Due to the above changes, we will be issuing the following compensations:

In Season II, we found that the density and the shape of many formations were inconsistent when there were too many or too few soldiers left alive, there were also cases where 1 soldier was added or removed from a formation due to unreasonable distributions. We have made the following changes to resolve these issues:

In Season II, operating units proved difficult when your Warlord perished in battle. It was not clear which units could still be controlled and when viewing the battle it was difficult to direct your units to a specific fight. We have made the following changes:

Improved Value for Cities and Fiefs:

In Season II fiefs and cities didn’t feel like they held much advantages, other than their geographical differences, dividends and resource points. This made some fiefs not very interesting to capture and own, so we have decided to make the following changes:

Unit kits can now only be created in specific fiefs, not all fiefs will have all kits.

In this Season we have added high tier units to high-level fiefs. When you level up a fief, the defending NPCs Units will be upgraded to higher tiers such as Tier 4 and Tier 5. The NPC Units will now join in the battle to defend a fief, however the more players in the battle, the less NPC units will defend.

Swapped the locations of Alter Westberg and Wildenhag and changed the related resource points. We replaced the Upper Ostar that blocked the west path of Augolia with a line formed by Edelsee, the mountain to its north and Altar Westberg, making Altar Westberg an even more important place. 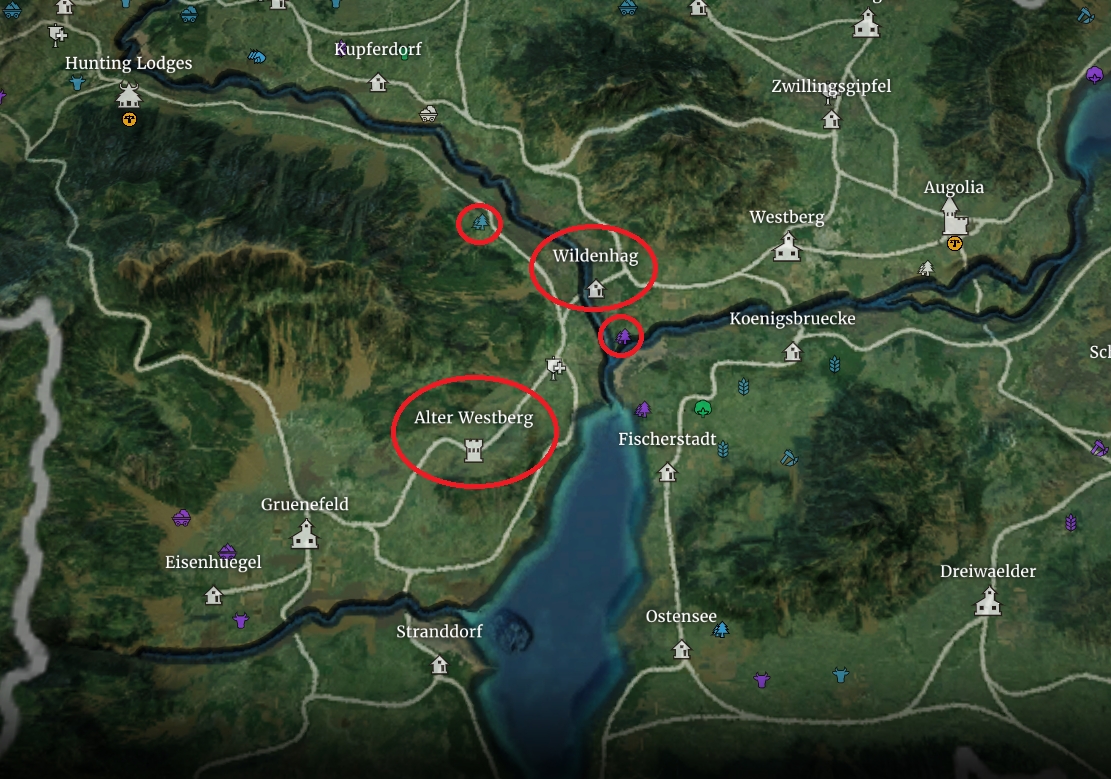 Relocated Hunting Lodges, making it a bigger threat to the fiefs in north-west Ostaria. 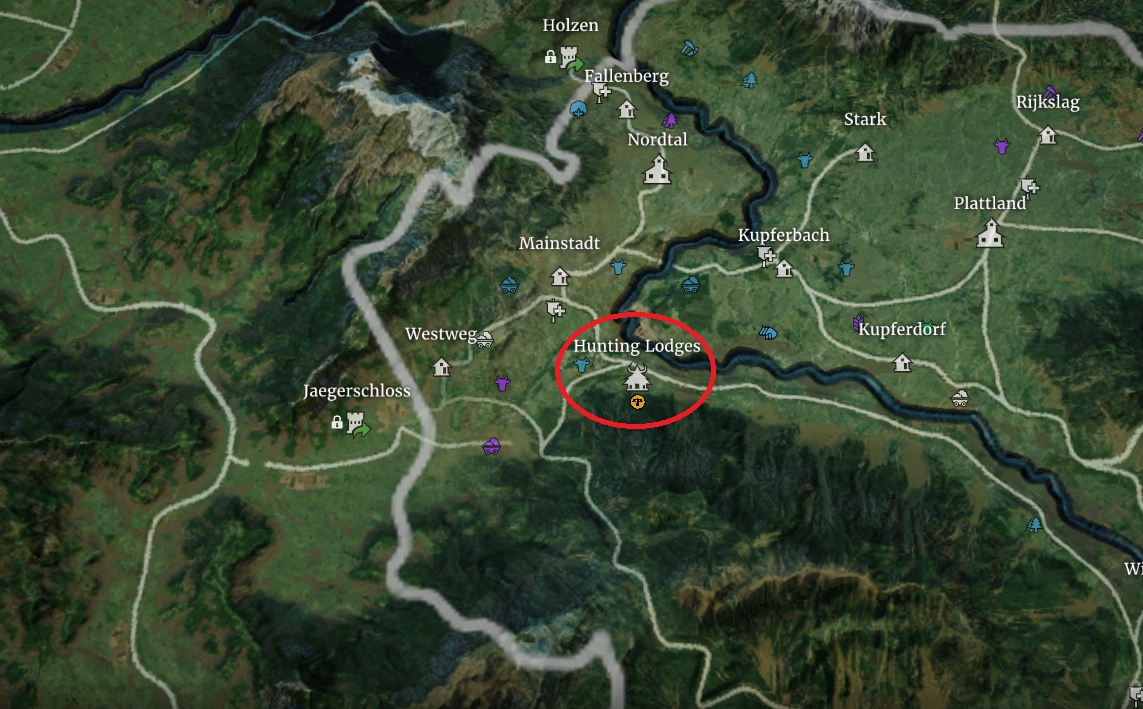 Relocated Segespaene to the east exit of Ostaria, changed it into a fort and deleted its associated resource points. 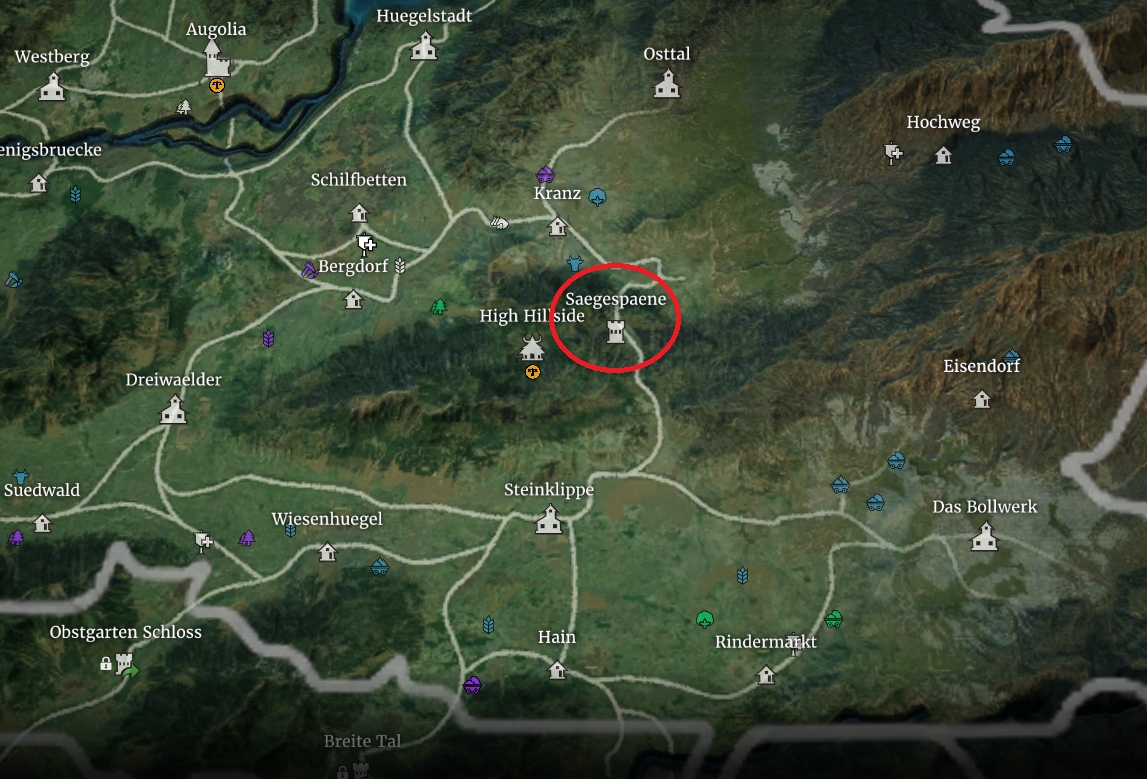 Added a bridge to the north-east of Borona, allowing warlords to easily march towards Ostaria. Changed Herceg Vára to a city. 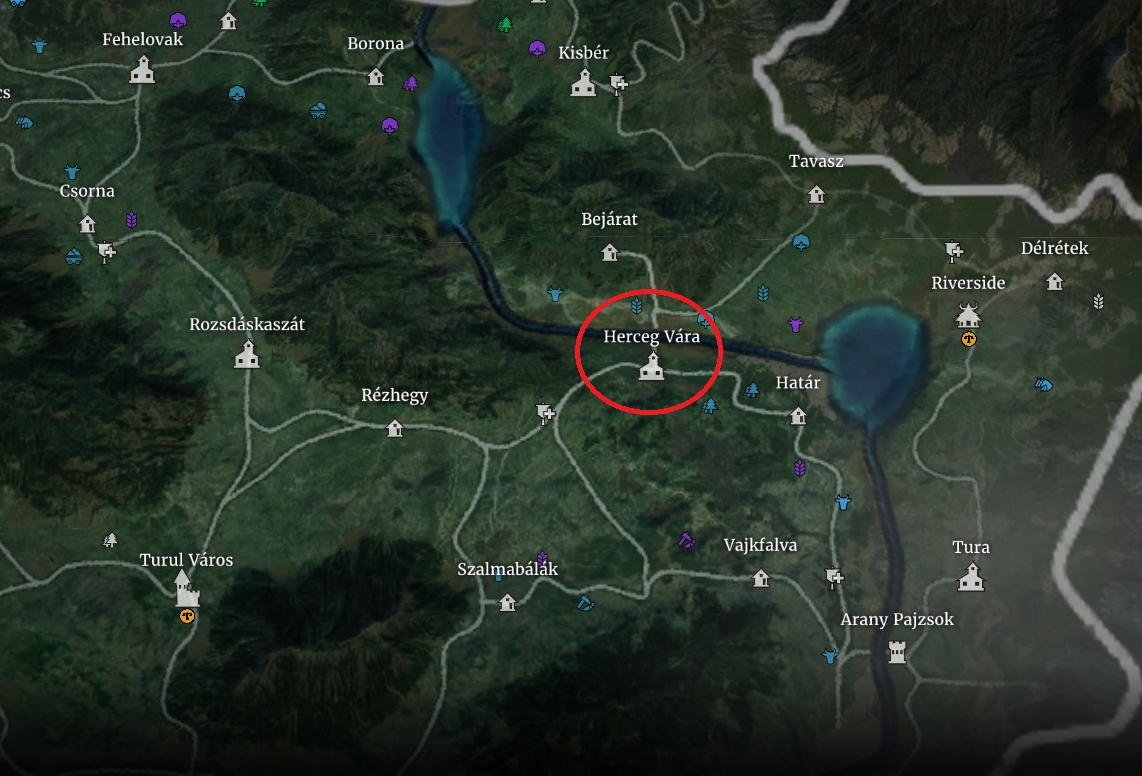 Moved to Vajkfalva to where Arany Pajzsok was located and changed related resource points. Moved Arany Pajzsok into a fort and relocated it beside the river. 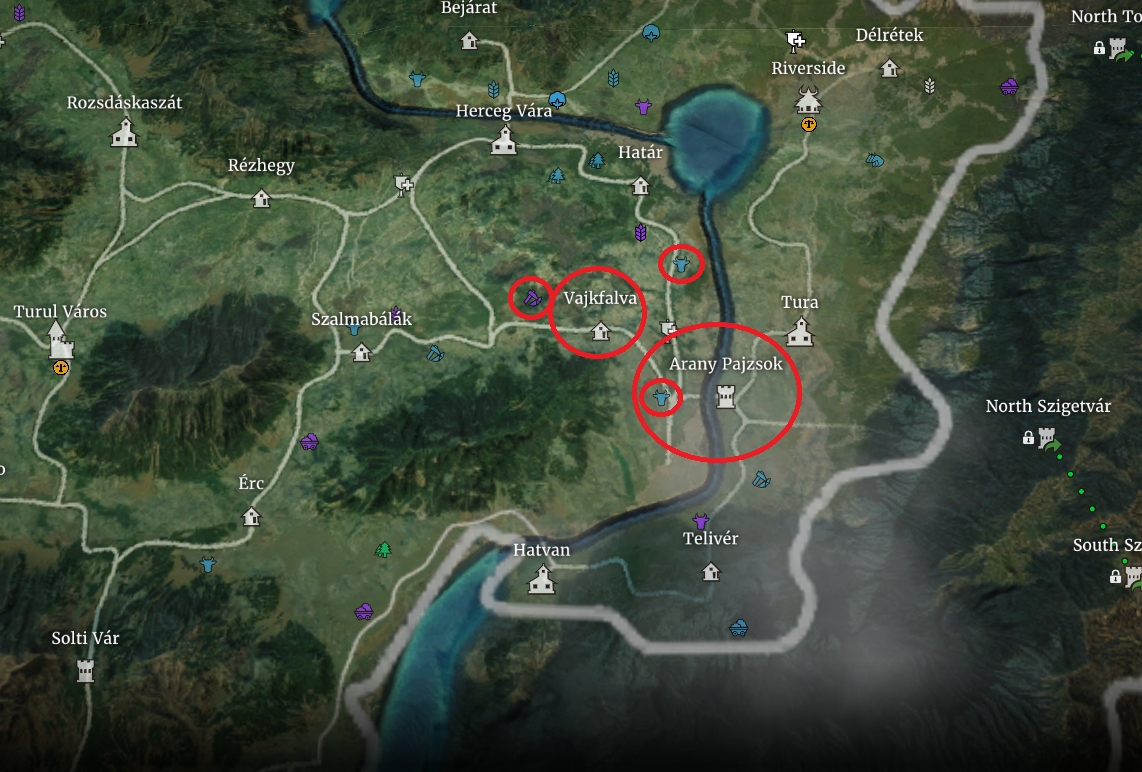 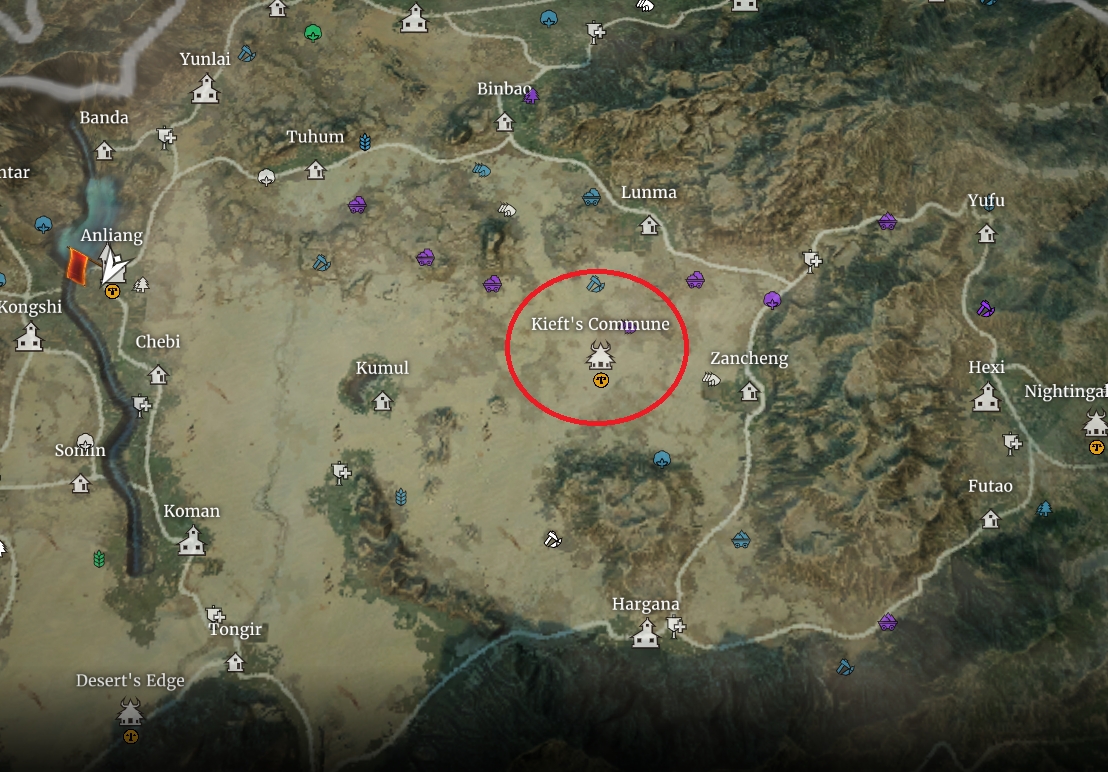 Relocated Desert’s Edge so it is somewhat closer to Zaifu, making it a bigger threat to Zaifu. 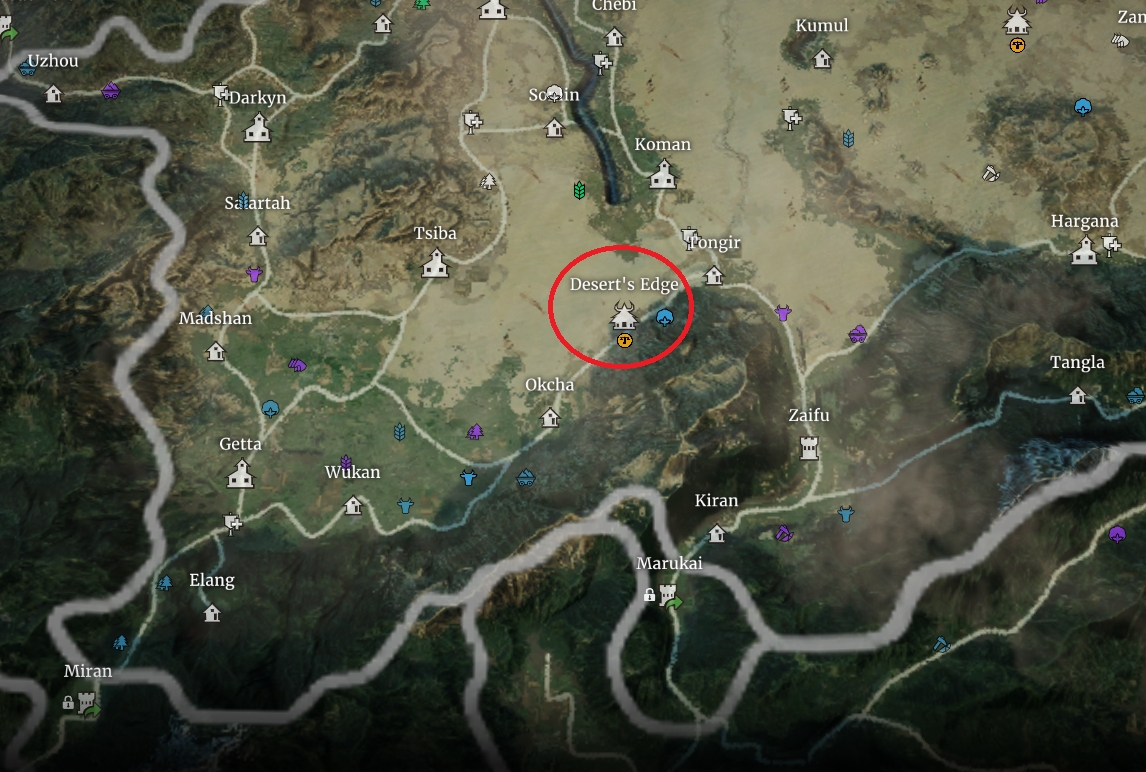 Changed Hargana into a city, increasing its strategic value in the lower-central area of Maoyang. Moved its associated resource points to the range of Futao and Zancheng. 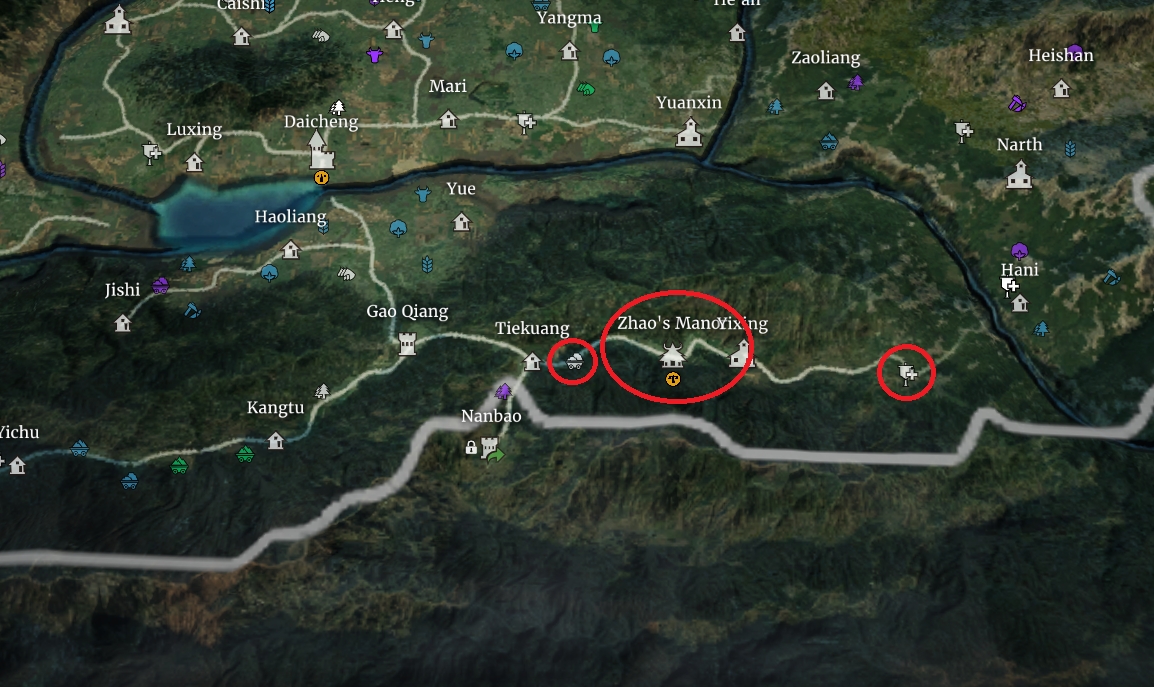 Changed Ihlov into a fort that blocks the path connecting Old Prospect and Genseric. Changed Baruun into a river-side fort that blocks the path connecting Bixi and Fujian. Removed all associated resource points of Baruun.. 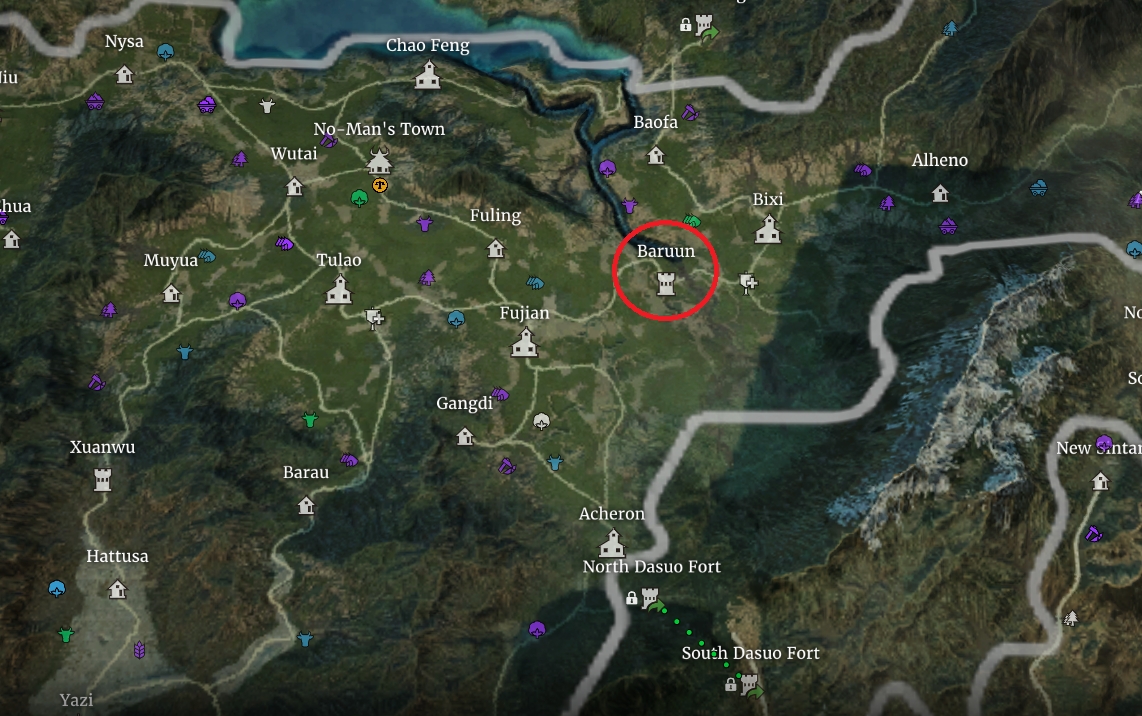 Changed Schaken into a fief to clear the path leading to the capital in the north. 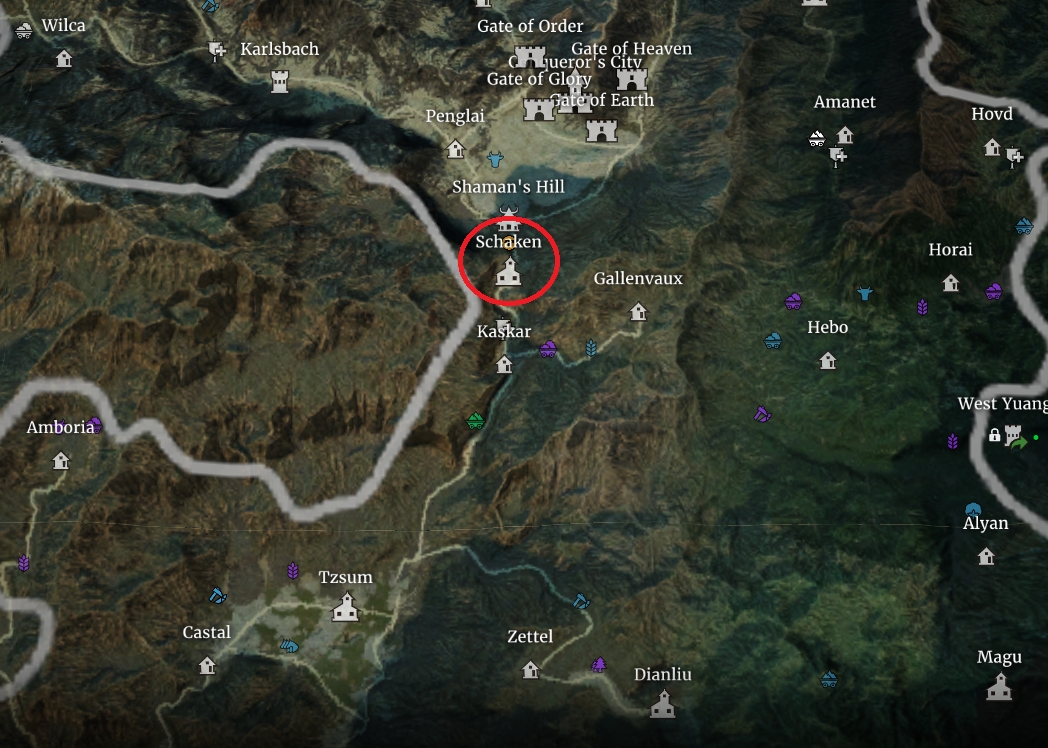 In Season II, to replenish food you needed to take food out of your wagons and interact with fiefs or wayside inns frequently and when your food was low you needed to manually replenish every time you left a fief. The penalties caused when you lacked food was restricting players, shackling them from being able to do things in the open-world, due to this we have made the following changes:

Resources collected from the open-world were designed to play a key role when making equipment and siege engines as well as finishing fief quests. In Season II, resources were supposed to be one of the key reasons to fight in Territory War, however the resource points in Season II were not attractive enough, we also had the following issues.

Due to the above, we have decided to make the following changes:

You are now able to check available resources of any fief and stronghold in the Market menu and receive it via a delivery. You no longer need to travel to the fief to collect the purchased resources, but you can if you wish. Delivery will incur a fee which will increase depending on how far away the resources are and how big the package is, the further away and the bigger the package, the more expensive the fee will be.

There are some limitations for this system:

When the Season III starts, players will need to reselect their region and the Borderlands will be closed off from travel. Due to this, we have opened Transport Goods delivery to allow you to reclaim your items from the various regions.

Transport Goods delivery will generate when your resources for sale expire in the Market, head to the Watchman in your fief and select “Transport Goods”, you will then be presented with a list of items. Select the items you want to claim and pay a small fee to have them transported to your current fief. This system only works to transport expired resources from the Market.

As there is an increased demand for purple mounts, in Season III purple-grade Stud Farms will respawn in any land whereas before they were exclusive to the Borderlands.

If you disconnect from the game while in the open-world when you are being pursued, half of the items in your wagon will be dropped and half of it can be picked up by other players. The dropped items will stay in the open-world for 10 minutes.

We found that cavalry has been almost unstoppable on the majority of field battle maps, so we have decided to make the following changes: 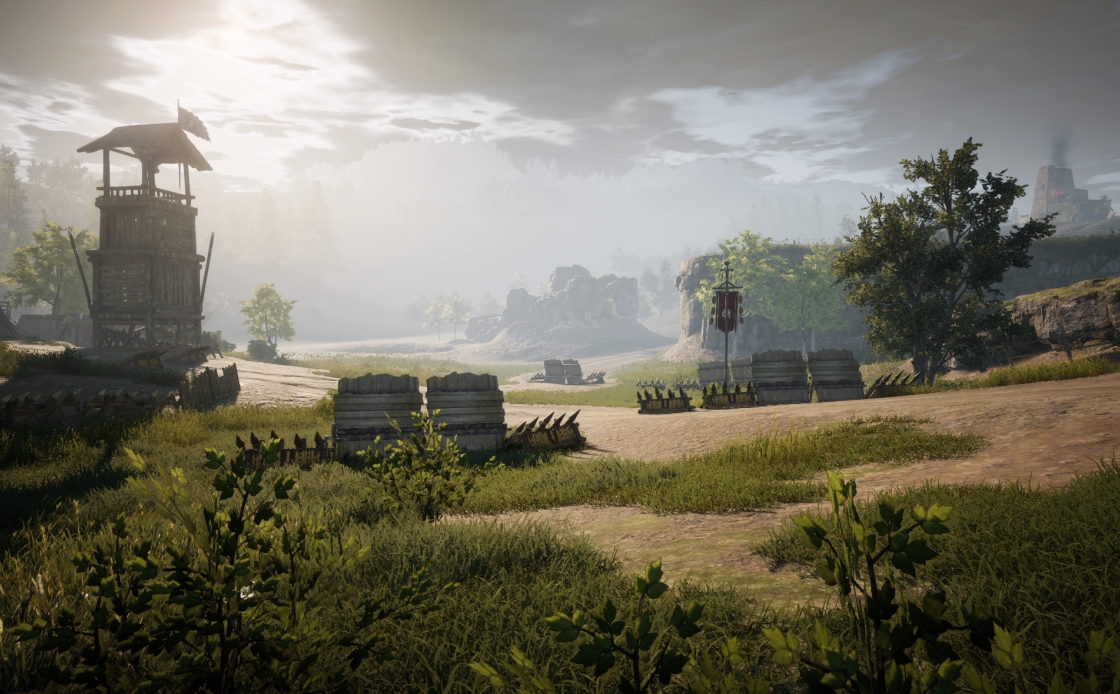 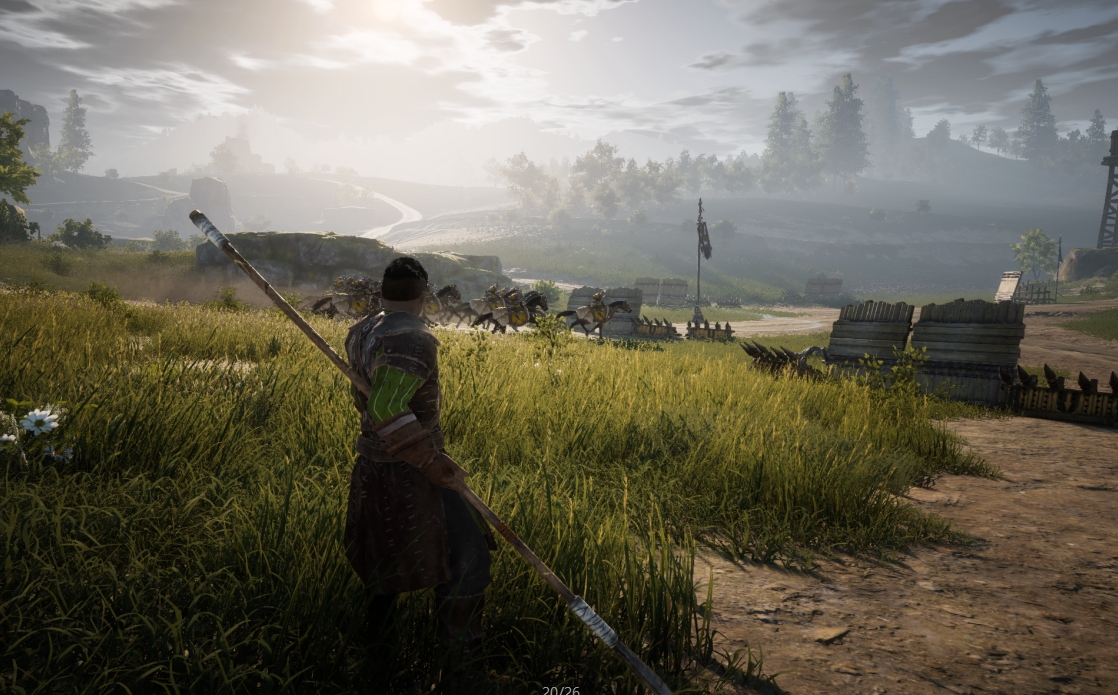 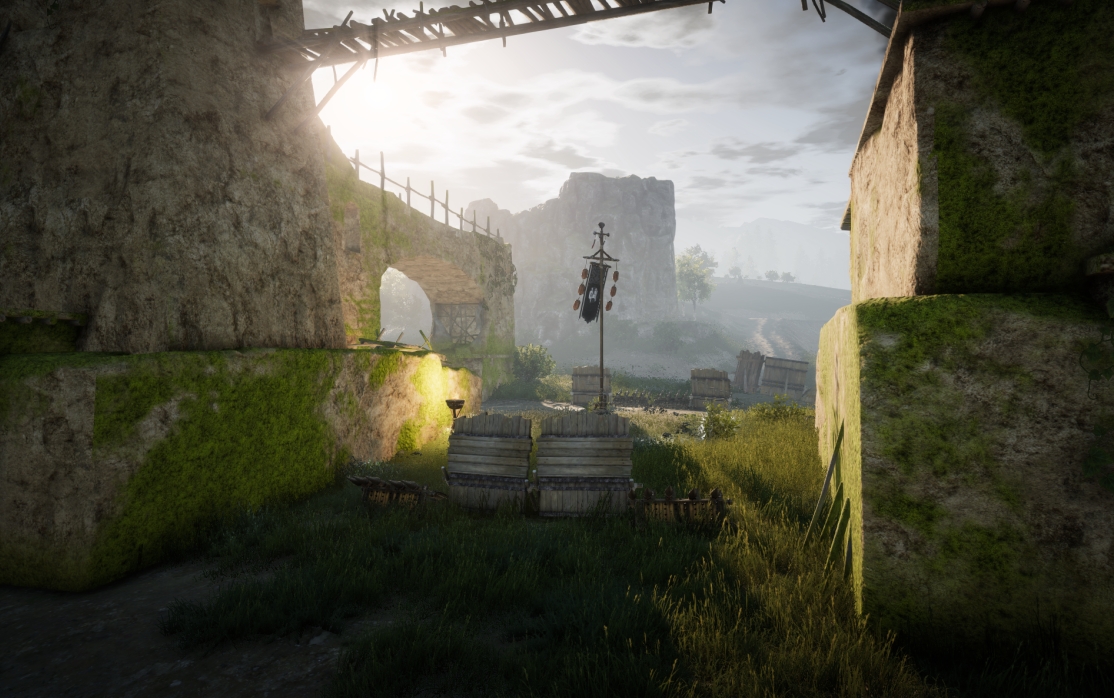 Fixed the issue with respawn points being too far away from objectives on larger maps by adding a new mechanic.

When a side captures Flag A or flag C it will activate a closer respawn point on their route to this flag which will allow the side to get to the front lines quicker. The side which failed to capture either flag has to respawn from the default point in their base. The default respawn point remains activated and can still be selected when Flag A or C is not captured. 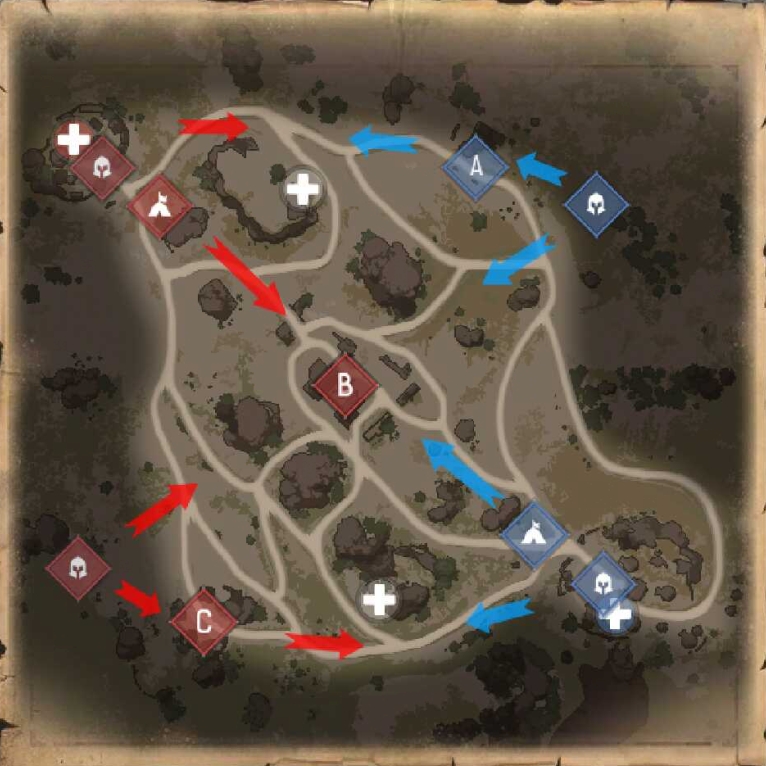 We found that some players could not make it out of their respawn points in some Field Battle maps if they were killed repeatedly in a short period of time, due to this we have added several respawn points for players to choose from instead of a single respawn point.

In Season II, warlords could jump to rooftops on open buildings from the ground by using skills or when mounted to reach areas where they could obtain unfair advantages on the battlefield. This was very annoying for warlords which lacked specific skills and affected the balance of these maps, so we have made the following changes:

When a warlord destroys newly deployed siege equipment he will receive additional points, destroying siege equipment which was deployed in the previous 10 seconds will grant 25 points, up to 50 points may be gained at a single time.

Damaging allies will now be recorded in the battlefield statistics but it will not affect your overall score.

Last chance: Get the Mercenary Attire Chest before April 21!