Once every year, warlords from across the land unite to celebrate the Winter Light Festival, a joyous occasion where new beginnings are welcomed with fireworks, festive costumes, and… war! Starting today, enjoy a plethora of fun festivities in Conqueror’s Blade including decorated, snow-covered capital cities and open-world areas, daily rewards, festive attire, and a new PvE campaign!

Play Conqueror’s Blade throughout the Winter Light Festival to receive up to 20 daily rewards, including a festive Helm, Winter Light Lucky Bags and Envelopes filled with loot, and fireworks! Don’t worry if you miss any days, just log in during the event to catch up with any gifts you’ve missed.

You’ll also receive three Festival Tokens every day you log in. These special tokens are said to bring luck and prosperity for the coming year, and you can spend them on lots of items, including a Red Lion Helm for your warlord (available for 7 days once equipped)!

The Great Wall is a wondrous structure which, together with the seemingly endless mountain range it’s entrenched in, forms a barrier to repel invasions from the north. Its mighty fortifications may be difficult to crack, and the army that defends it may be legion, but your triumph is vital if you want to advance on the Conqueror’s City!

The Storming the Great Wall campaign will be available until February 11. You can earn Festival Tokens from your first three battles on the Great Wall every day, though rewards will be slightly reduced in subsequent battles.

Vanquish your foes on a frosty new battlefield during the Winter Light Festival! Many critical battles have been fought on the Wuqing Plains across the centuries — who knows what tales of brazen heroics and valiant deaths the ancient ruins conceal? 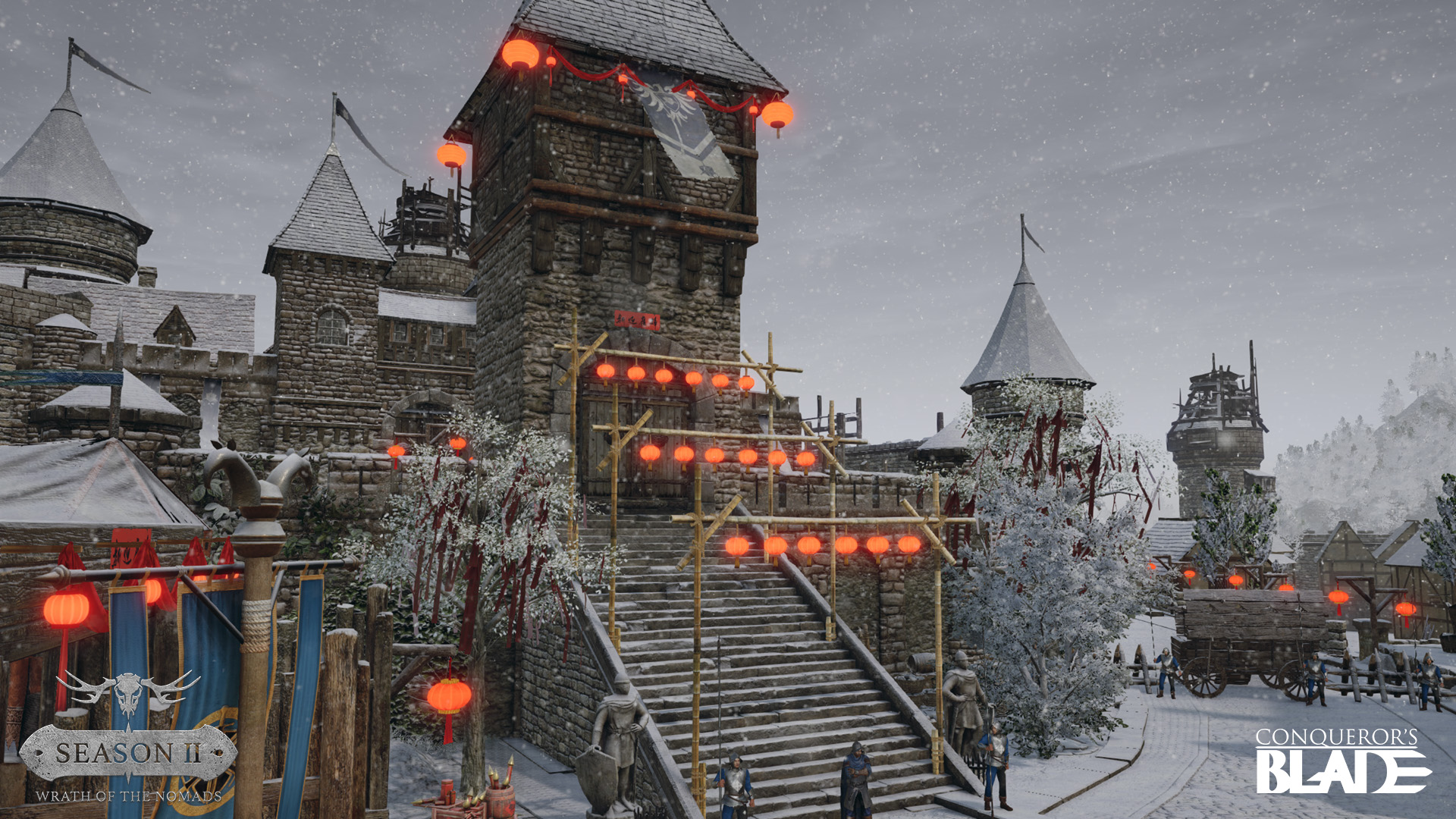 A cold front has swept across Free Battle maps, bringing frigid snow and treacherous conditions to a new selection of battlefields during the Winter Light Festival (replacing Ghost Town, Augolia, and Grassland Assault). Make fights fizzle by finding and destroying festival decorations to set off fireworks, and fire artillery weapons to behold a spectacular display of colour and light!

Your warlord and units may find it harder to move in the cold and snow when they become ‘Freezing’. Find a brazier to thaw the chill and make your heroes and units ‘Warm’, a status which grants cold resistance and a jaunty boost to movement and attack speeds!

Head to the in-game Store to purchase new festive attire and a marvelous range of Winter Light Festival fireworks!

IMPORTANT: Attire for Heroes, Horses, Units, banners and weapons in Conqueror’s Blade is purely cosmetic, and does not grant additional bonuses or advantages during gameplay. It just looks really, really cool.

Celebrate the Winter Light Festival in Conqueror’s Blade from now until February 11! 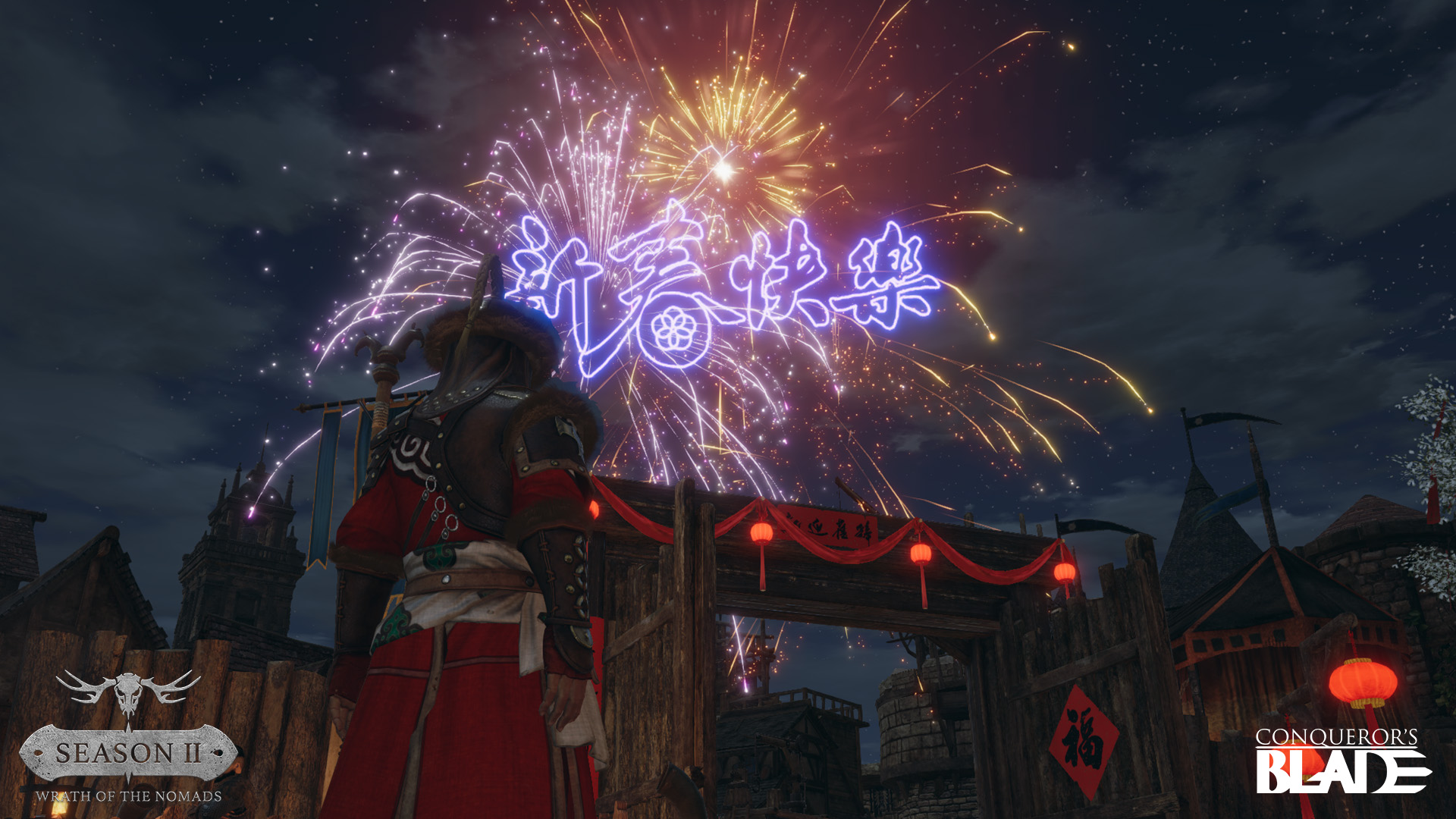 Introducing Cohorts and Legions: Territory Wars for all!