Camels rode into Conqueror’s Blade: Scorpio in December and have cemented themselves in the hearts of commanders worldwide. These humped mounts heralded the start of a new age, where assassins roam and sandstorms beat down on the people of this arid land.

We spoke to the game designers at Booming Tech about all things camels, from initial idea to existence.

Why did Conqueror’s Blade: Scorpio feel like the right time to add camels to the game?

Being an animal of the desert, camels fit the theme of the Scorpio season like a glove. Our plan was always to flesh out our roster of calvary units in Scorpio, and the unique features of camels were a solid option. Camels have been used in warfare across history, but they had yet to make an appearance in a playable form in Conqueror's Blade, and we felt that they would bring more fun to the game. 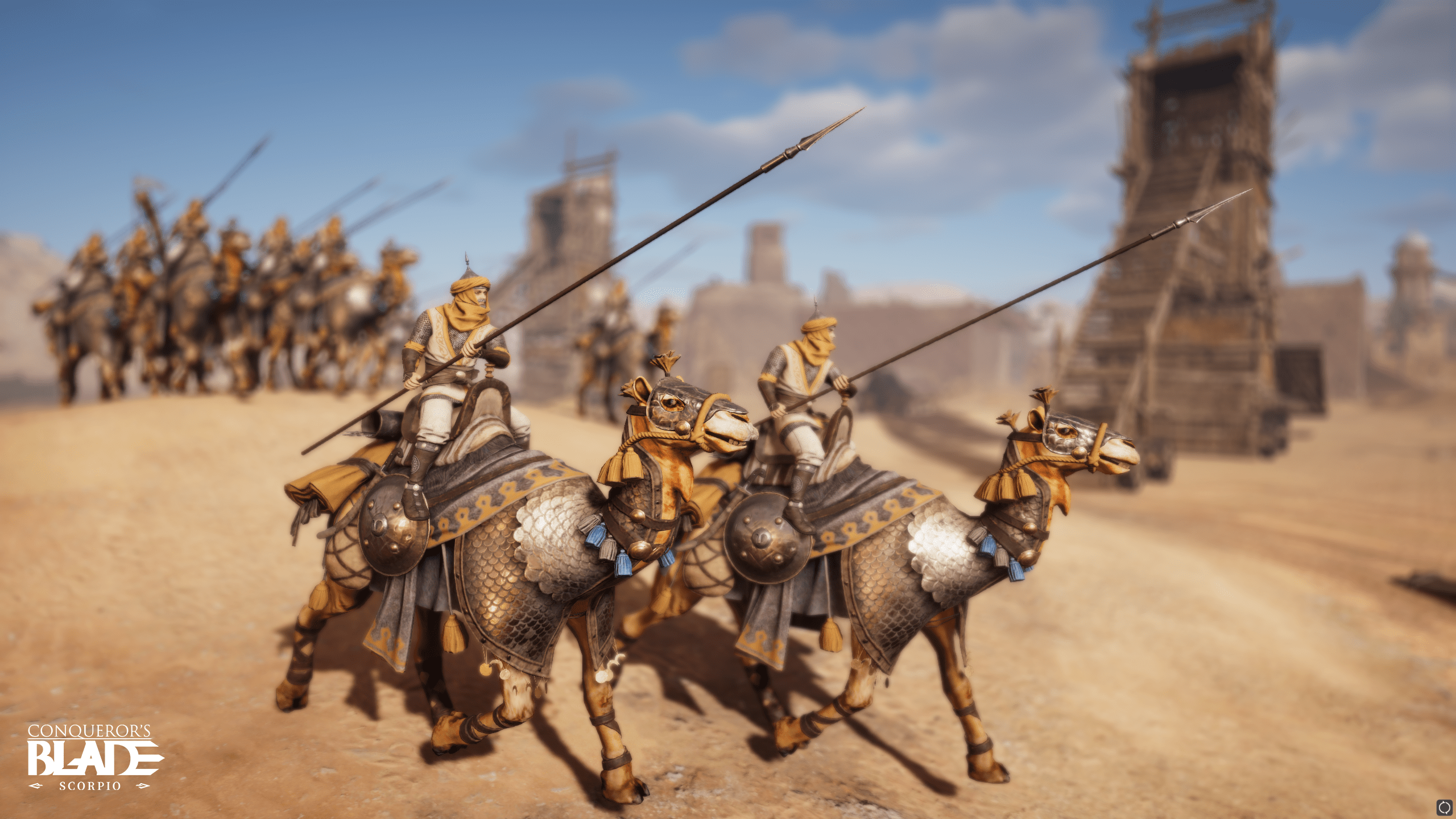 Which came first—-the idea to implement camels or the Season theme? Was one implemented to fit around the other?

We came up with the Season's theme first. Each Season works as a complete mould, and units are but a part of this mould.

Talk us through the process of designing the camels, from models to completion.

The camels stood out among our many designs and it was a new unit we really wanted to bring our players. Once we knew that, we completed the design by looking at their historical background, role in battle, weapons, armour, and combat method. We decided to go with a heavily-armoured, lance-wielding cavalry. Camels are big, and so with their heavy armour, we really want to emphasise their endurance. That's why the Camel Lancers have fairly good defence and resistance to daze. Plus, looking at the current meta, we wanted to add an anti-cavalry unit with high mobility to bring about some change.

The Camel Lancers are a new kind of cavalry on the battlefield, how do you think they measure up to standard horse cavalries?

The Camel Lancers are bigger than our standard horse cavalries and heavily armoured. We wanted to express their thick armour and skin by enabling them to retain their posture while attacked. Considering their movement; while camels can march for long periods of time under harsh conditions, they tend to move slower than horses, so naturally, their charges will not be as impactful. That's why the Camel Lancers don't have a charge skill and have reduced movement speed while in formation. Owing to these two points, we tried to make the Camel Lancers a unique cavalry unit to add to the roster.

We've seen hounds of the highlands, and now camels—-will we see more animals enter the fray in Conqueror's Blade down the line?

By looking at history, we can see the usage of animals in battle for more or less every region and civilization, whether from historical accounts or tales of legend. Anecdotes like these serve as important inspirations for Conqueror's Blade, and we're bound to try more of these in the future to have more interesting units join the fray.

Are the camels Bactrian or Dromedary?

Camels scare horses, but what do you think would scare camels?

Fire is deadly to camels, and fire attacks will easily frighten camels. While the Camel Lancers counter cavalry, they can effectively be taken down by high-damage infantry. Finally, when the Camel Lancers use their Barricade Order to block enemy attacks, it will be easy for the enemy to have ranged units concentrate their fire on them.