Christmas Day has come and gone, but that doesn’t mean the festive season is over! If you still have gifts to give (or receive) maybe you need some inspiration from gift-givers of yore to make sure your presents are full of the wonder of holidays’ past.

Join us as we explore just what kind of gifts ancient merrymakers were giving to each other, and offer up some present-day alternatives.

Food was as popular a gift in the past as it is today, and the tradition of presenting treats to your loved ones dates back to Rome. Kalends, a Roman feasting festival that took place in January, was a time for presenting tokens of good fortune and luck for the year ahead; in the form of food! Everything from baked goods to figs and honey were gifted.

Food also played an important part in the Christmas celebrations of the medieval era. Peasants would bring their best fowl to place on their lord’s table as a gift. One such record exists claiming that the monks of Christ Church Canterbury gave the archbishop a whopping 785 hens for Christmas, which he then gave away to hospitals and surrounding monasteries.

Toys for good children are still commonplace today as a popular Christmas gift, but this practice dates all the way back to the Roman festival of Saturnalia. Children would be given wax dolls—with a darker meaning than exists now. Historians believe the giving of wax dolls may have been leftover from a fertility ritual once linked to Saturnalia, in which sacrificing children was a component. We’d prefer a lump of coal, thanks!

Victorians practically wrote the book on Christmas traditions, and gift-giving was no exception. Children would receive homemade presents, usually dolls, until factory-made wooden toys were introduced.

Past: Wooden or wax toys 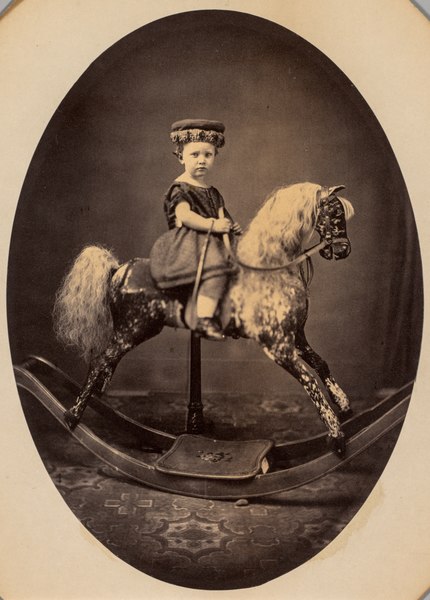 A Victorian-era child atop a dappled rocking horse

Books remain a popular gift today, whether they’re a paperback thriller, a must-listen audiobook, or a celebrity autobiography. However, during Henry VIII’s era, books were given to curry favour, not just entertain their recipient. John Leland, Henry VIII’s antiquary, gave the King a book as a “New Year’s Gift”, which included details of his travels and accounts from the past year (so… meaningful?). Leland probably hoped to gain further support for his work from Henry thanks to this nifty gift.

Past: A biography of your year written by your servant

Who doesn’t love opening up a card to find a crisp note of legal tender? Even medieval serfs gained financially during the holidays—they would often receive gifts of cash from their employer or lord. Henry VIII’s Letters and Papers tell the tale of one particularly generous employer, who gifted his servant 2,000 pounds in gold.

We hope we’ve inspired your gift-giving, and perhaps your own wishlist too. Happy Holidays and a Happy New Year from Conqueror’s Blade!

Ring in the New Year with Twitch Drops!