Conqueror’s Blade: Colosseum launches on September 1 alongside a brand-new game mode: Colosseum! We’ve already looked at the gameplay you can expect from Colosseum, but now we want to enlighten you on development insights behind the design of the new mode, from current mechanics to future iterations of it.

Conqueror's Blade has always been a game with a focus on teamwork. Ranked Battles and the Conqueror’s Blade League (CBL) emphasise the importance of teamwork, but many players have told us that they want to be able to directly affect battles with greater room for personal performance.

Both Siege and Field battles are epic fights with 30 players, yet within these massive battles, smaller skirmishes can be just as memorable. We feel that Conqueror's Blade needs more diversified modes so that players have a greater chance to control the battle and show the strength of their hero.

Following several internal tests, we believe that a 6v6 mode serves to realise both of these objectives. We've added mechanics from Field Battles and tried to change up the rules a bit for more variety in the new Colosseum Mode. Hopefully, this will bring you a brand-new experience!

The unpredictability of battle is an important factor in maintaining excitement and replayability. In traditional Siege battles, the most exciting part is when heroes contend for that final flag. In Field battles, it is the constant contention for points, and that the winner isn't decided until the very end. In the new Colosseum Mode, we want to combine the best parts of these modes to increase the unpredictability, speed, intensity, and competitiveness of battles.

Focusing on the performance of each player does not mean throwing teamwork aside. We've added three neutral NPC gladiators to Colosseum, and to defeat them, you must work with your allies. The three types of gladiators will make battles unpredictable and more goal-oriented. No matter how each player fares, everyone has the chance to slay the gladiators and turn the tide of battle. As a warrior of the Colosseum, your every contribution to victory is commendable and will be rewarded.

If you challenge and defeat the Colosseum champion, you'll win additional unit support and grow your power. Naturally, beware of enemy ambushes so that they do not snatch the advantage right before your eyes. The team that lags behind must work together to seize the chance to turn the tables.

As the gladiators join the battle, the fight will grow fiercer and more precarious.

It is important to fight tooth and nail for every resource in the ever-changing Colosseum. There's only one supply point and a single flag whose capture zone shrinks with time, while points deduct faster and faster. This means that every second matters and affects the final result. With these mechanics, teamfights will be more frequent, meaning each choice and action you take will have a greater overall impact.

Apart from adding neutral NPCs and a capture-the-flag mechanic, we've also added an audience and a commentator to add to the atmosphere and immersion based on the Season's story, and to bring you a more authentic Colosseum experience. When someone performs well, for example, if they kill a hero or earn a medal, the audience will cheer and shower them with praise.

We are looking forward to seeing your decision-making in the battles to come, as you seize every chance to defeat your enemy and make a greater impact on the outcome of a battle. 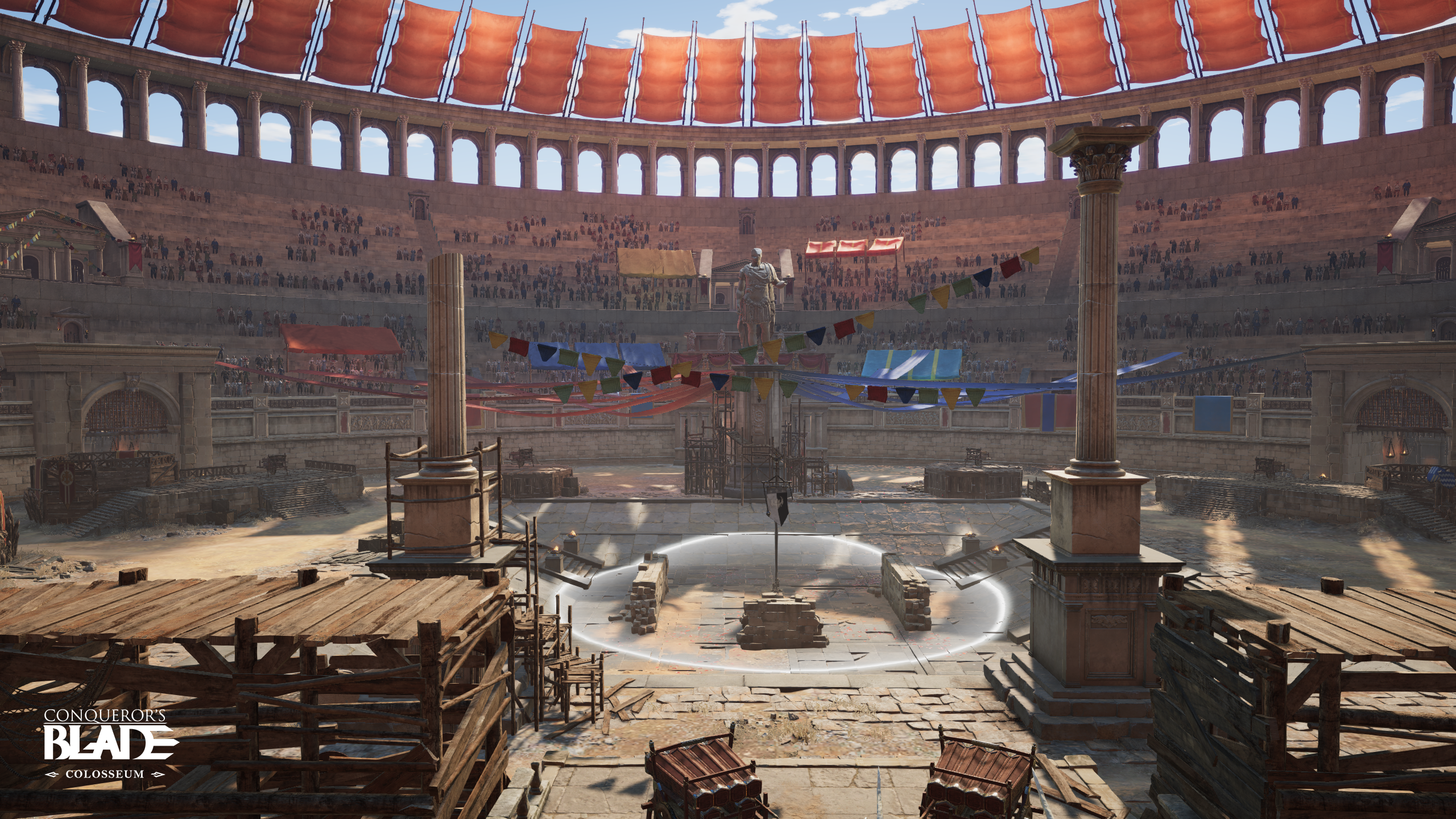 The Future of the Colosseum Mode

We've seen plenty of amazing ideas and feedback from the community, and we want to try something new with the Colosseum. We'll be focusing on your feedback as we progress from here and continue to work on the new mode, whether that’s its rules, NPC types and power, or the flag point. Colosseum Mode is here to stay, so we will continue to improve the gameplay and design over the seasons to come.

We'd love for the community to give us feedback throughout Conqueror’s Blade: Colosseum. Make your feelings and thoughts about Colosseum mode known via Discord!