As Year Three rolls around, we want to explore the vast and rich history of Conqueror’s Blade, from the golden rivers of Longting to the desert barrens of the Borderlands. Inspiration was found in real-world history, from the Viking era to Ancient China, and beyond, with some artistic licence taken along the way. Booming Tech and MY.GAMES have crafted a unique, immersive world to battle in and explore.

Through four incredible seasons, we've seen huge changes to Conqueror's Blade, and our Community Team is no exception. Below are a few highlights from a fantastic year of streams hosted by our Community Managers.

If you’re new to the game or just need a refresher, here’s a recap of the last eleven seasons of Conqueror’s Blade to celebrate Year Three and prepare you for future adventures! 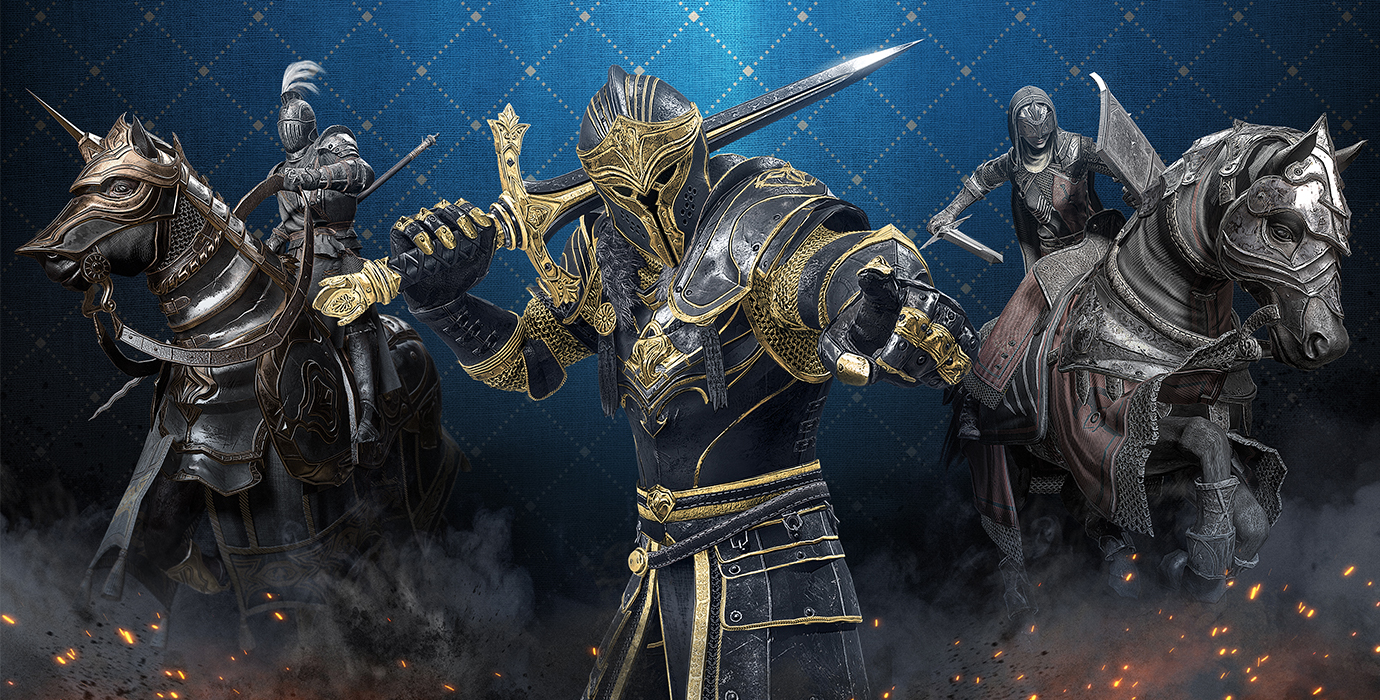 Season I: Seize the Crown

Kicking off proceedings with a chivalric theme, Season I invited players to forge their legend in a land where soldiers could rise from nothing to be crowned kings, only to lose everything in an instant to a new power. The symphony of war called out and invited new challengers to fight for control of this land and eternal glory, a simple premise that set the stage for a bright future. 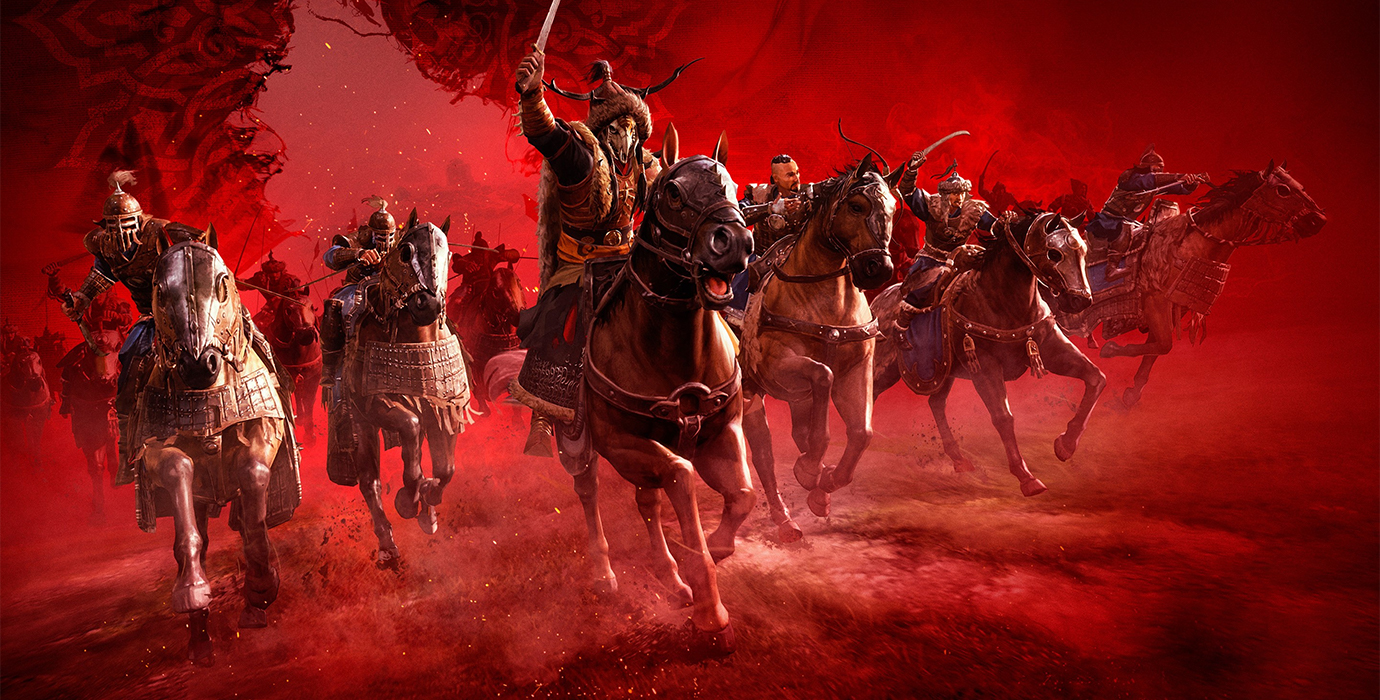 Season II: Wrath of the Nomads

Conquerors soon found themselves at odds with the Sons of the Steppes in Season II. Natives to this land who long endured in the face of insurmountable conditions, these warriors from the great rolling steppes of the north live off the land and keep to themselves. However, they have been known to lend their combat skills to allies, and in doing so, decided the fates of empires throughout their storied history. Players who withstood the wrath of the nomads could earn cosmetics based on their sacred wolves, and even recruit six Sons of the Steppes units to their campaign. 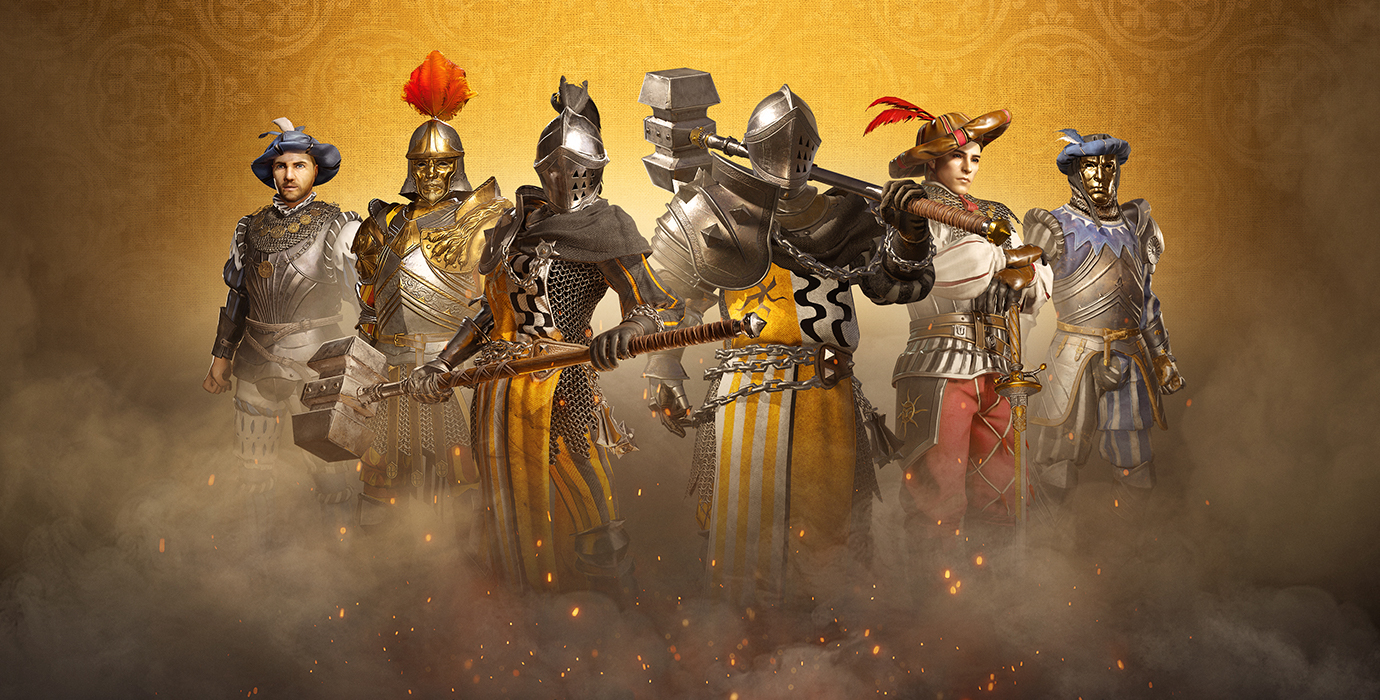 The rise of the nomads saw occupied lands reclaimed, ill-gotten treasures seized, and once-proud noblemen driven into exile. Escaping with what little gold they could carry, the disgraced lords travelled south to Sicania, where they recruited an infamous band of sellswords to exact revenge. With gold-lined pockets and notorious reputations preceding them, these soldiers of fortune wrought havoc with deadly crossbowmen, fearless swordsmen, cutting-edge artillery, and cavalry killers fighting in the name of a legendary mercenary. They even brought the Maul, a new Weapon Class whose hammer of reckoning fell upon the land as if it were an anvil. 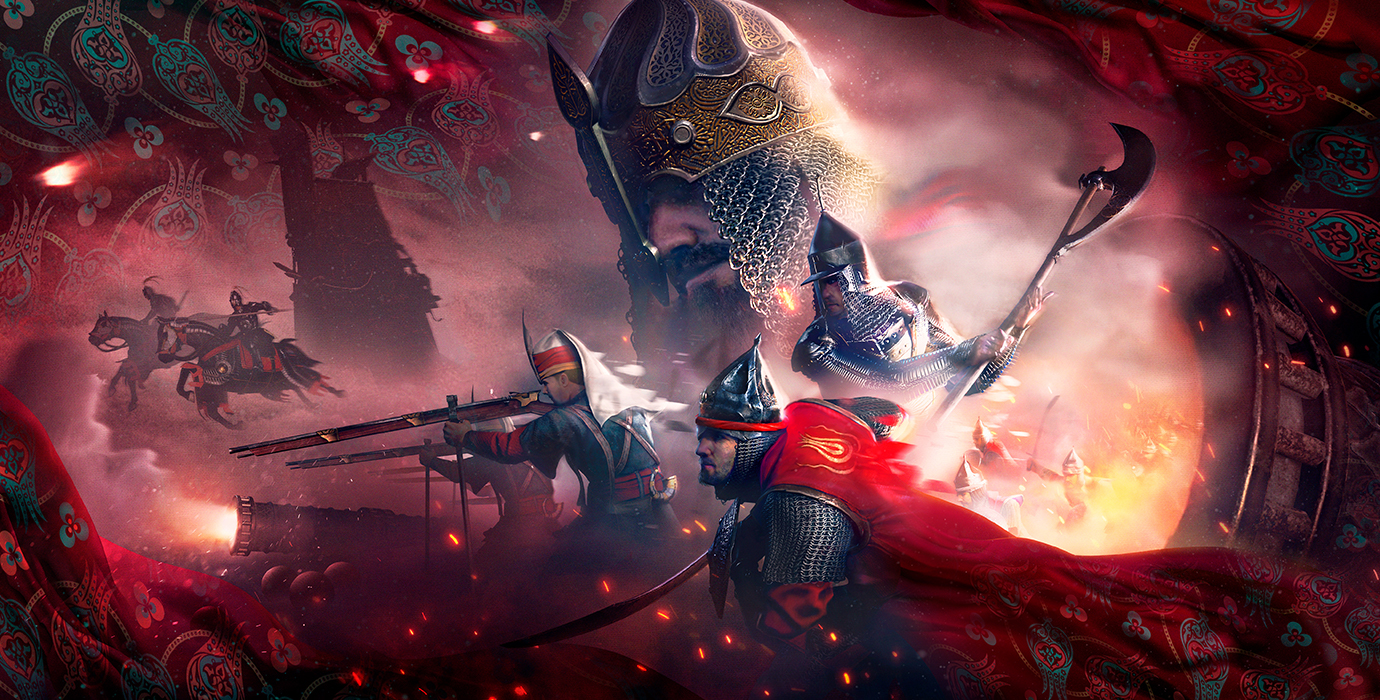 Season IV: Blood of the Empire

As noblemen, nomads and sellswords fought tooth and nail for dominion, a new shadow was cast. The ascendant Anadolou Empire (inspired by the mighty Ottoman Empire) marched north under the banner of Sultan Fatih Suleyman IV, a keen tactician who named himself heir to the Conqueror's City and all the lands surrounding it. The Anadolou Empire valued patience, discipline, and more strategic measures to attain victory. Four new units from the Turkey-inspired land of Anadolou joined the battle throughout this epic Seasonal Campaign. 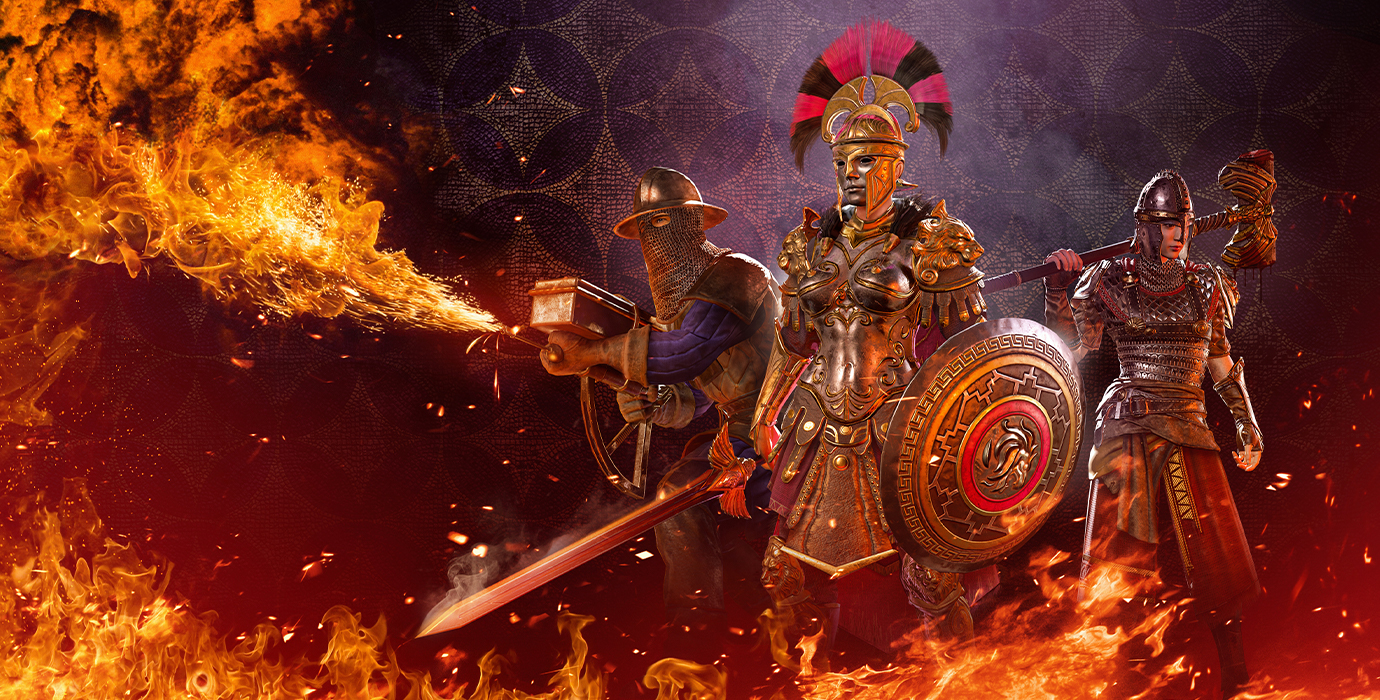 Season V provided warlords with a link to the past, with the story starting over 100 years ago with a king’s reckless rise to power over the Kingdom of Empyros. The young king mustered an army of knights from across the land called the Symmachean Brotherhood, assembled the kingdom's greatest minds to create weapons of fire and destruction (wielded by two new seasonal units), and travelled to the Anadolou region in search of treasure. A power struggle between the knights reduced the once luscious land to ash, and a fire was stoked in the hearts of the citizens of Anadolou. This fateful attack would eventually lead to the Sultan’s successful conquest. 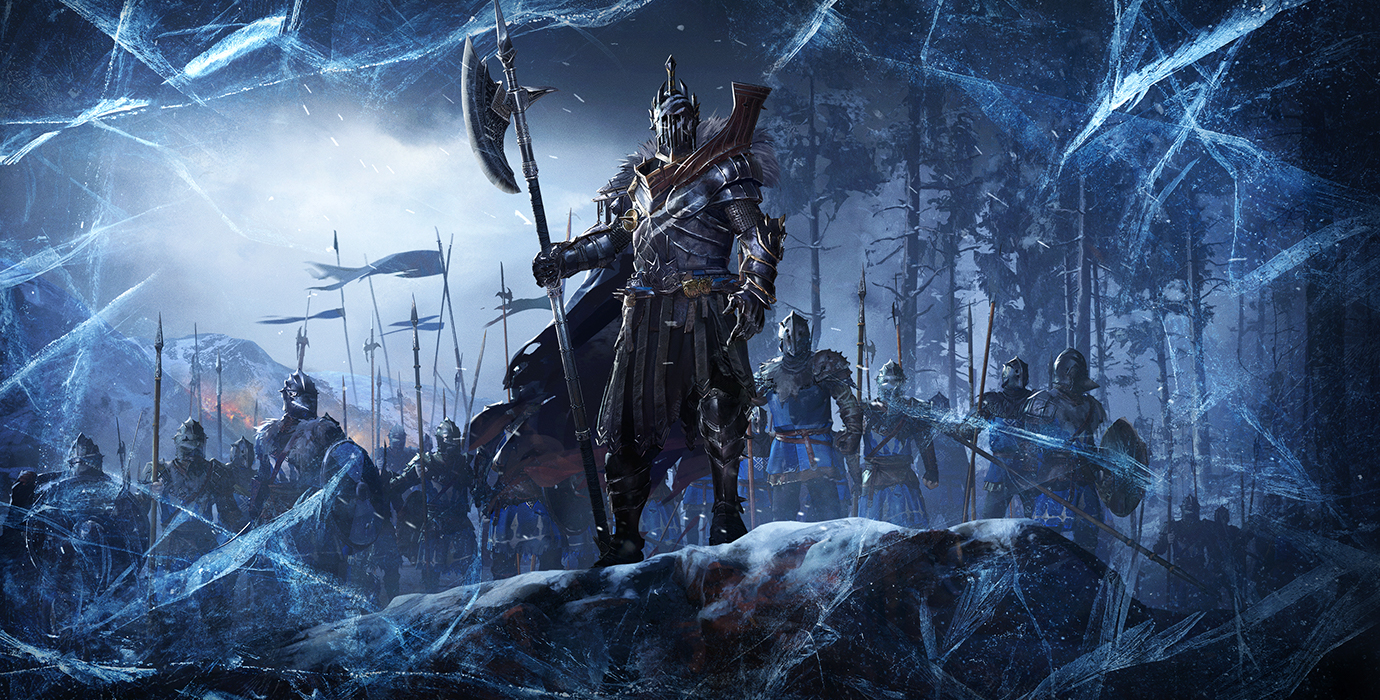 Winter held the North in an icy grip, and a horde of villains known as the Desecrators conquered Ostaria. Acting on the orders of the Scourge of Winter, a mysterious and terrifying figure said to plague the land in legends of old, they sowed terror across the North, driving survivors of their brutal assault south to Ungverija. Here, thanes, freemen, knights and kings alike joined forces in a desperate alliance to deliver Ostaria from evil, defeat the Scourge of Winter, and drive back the Desecrators by winter's end. Season VI was notable for a mid-season boss battle, where players could lock blades with the Scourge of Winter and his dark lieutenants! 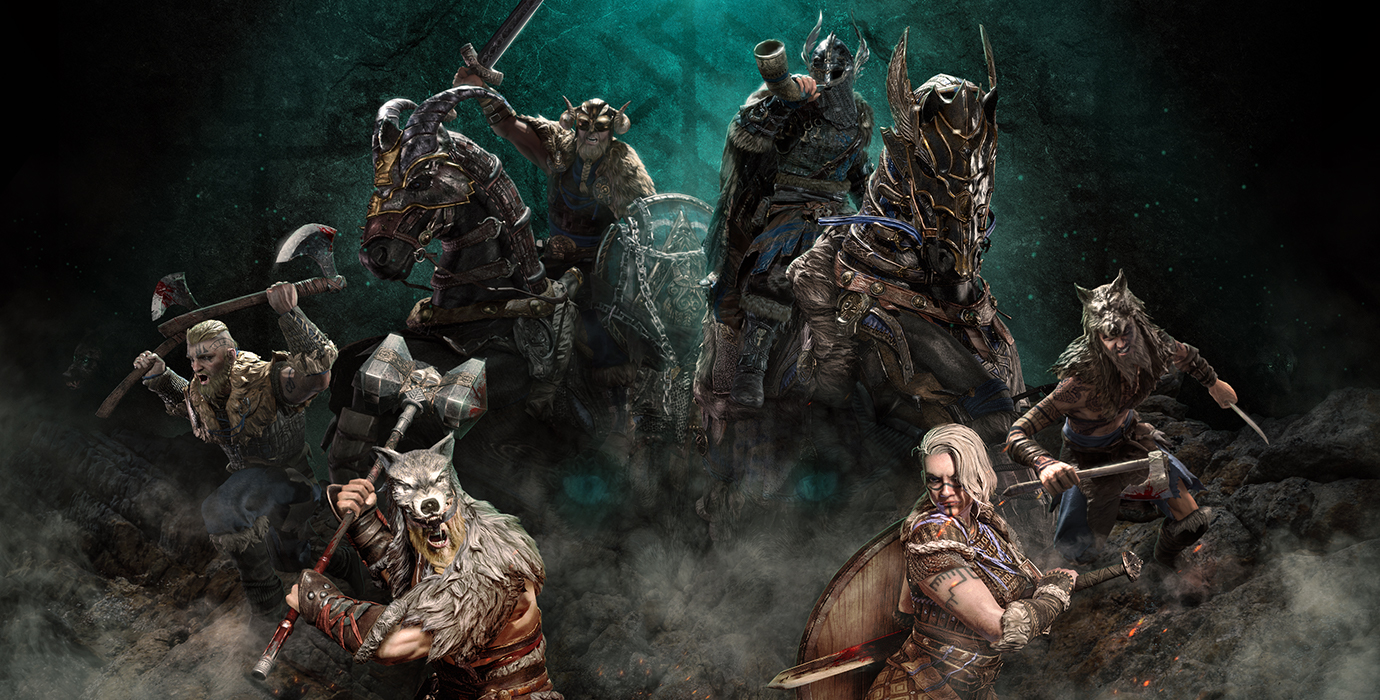 The war for the North was won and winter’s grip was beginning to thaw. However, amidst the din of blades in bloody battles, something sinister took residence in the forest east of Vajk’s Lake in Ungverija. Strange lights danced in the pines, lupine howls scarred the midnight air, and a rising tally of souls was lost to the shadows of the glade. It was here that the Sons of Fenrir, demented worshippers of an ancient wolf-god, were unleashed. They amassed an army and ravaged the land in the wake of the war against the Scourge of Winter, seeking to enthrone their leader as king by any means necessary. As fear began to take hold, a band of warrior Northmen arrived in Ungverija. Armed with axe, shield, and the thunderous fury of the Allfather, they set out to save the land from destruction… 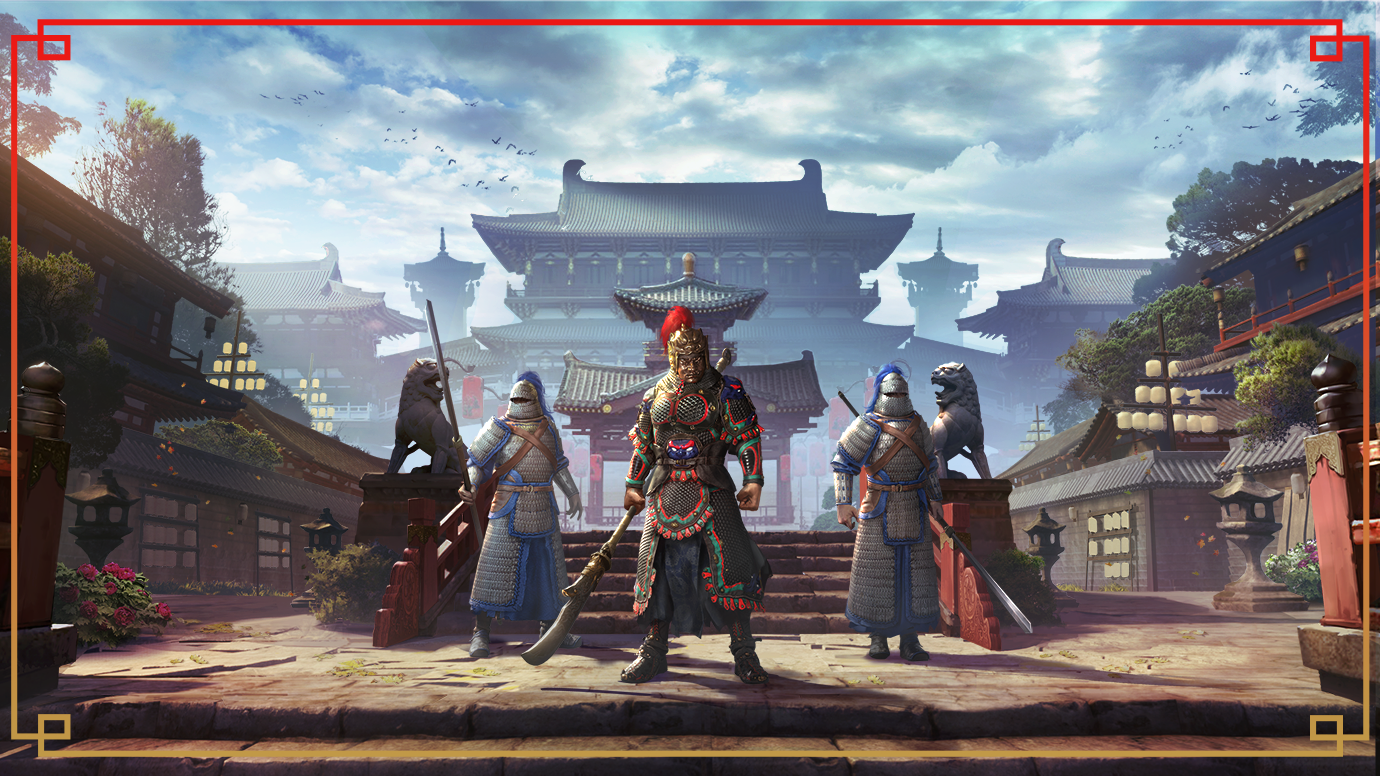 A new golden age was upon the people of Longting, and the Qian Empire brought prosperity and peace. Crucial moments paved the way for its rise, including the opening of the Golden Road, where anyone could discover this once-secretive region for themselves and share in its opportunities. Warlords sought out the peaceful yet highly-trained order of warrior monks, recruited a garrison of old soldiers who fought to defend Linwu Fortress from invaders for 40 years and met warriors wielding the great bladed 'modao', reputedly able to cut a cavalryman and his horse in two with a single strike. 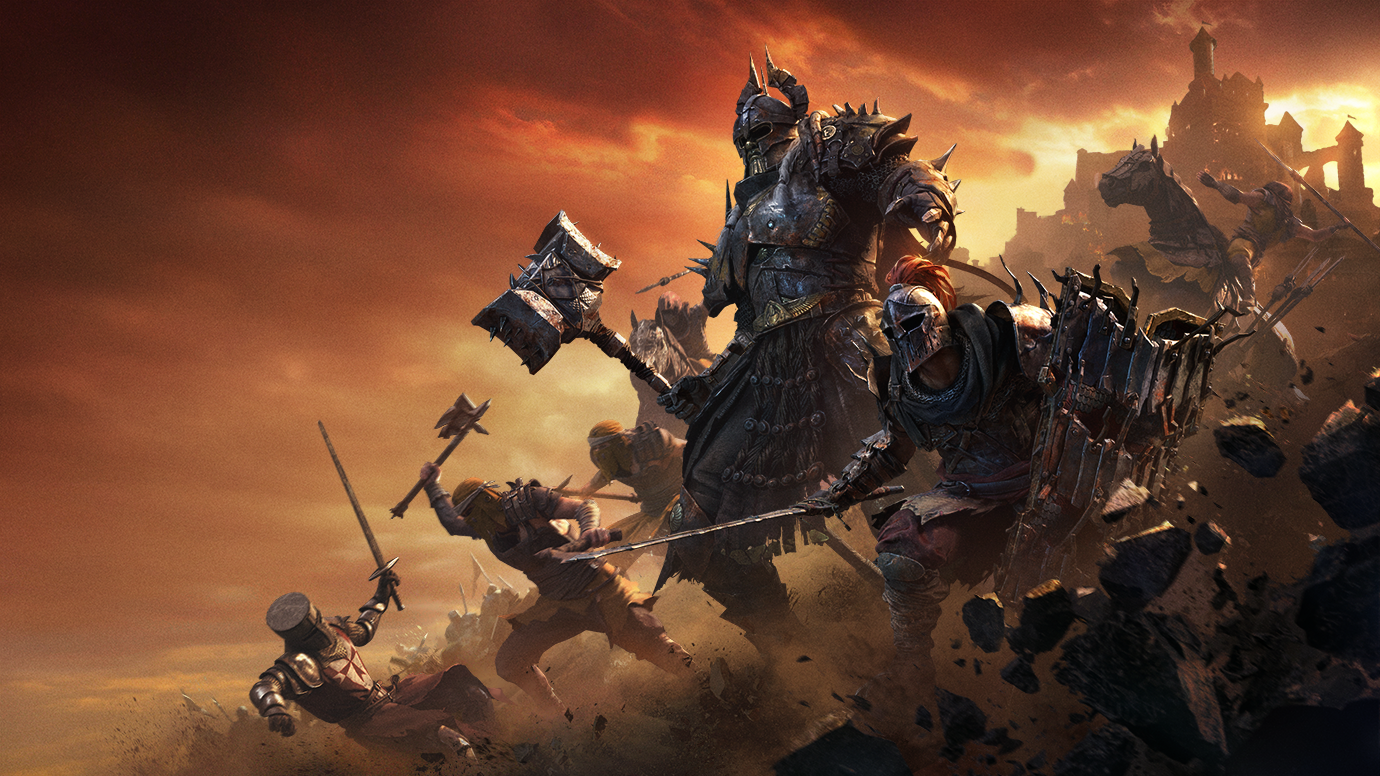 In the shadows of victory… darkness festers. A powerful, terrible man was rumoured to be amassing power in the leaderless vacuum left by the war for the North. The Borderlands fell, and the populace was slaughtered, enslaved, or conscripted into this tyrant's dreadful regime. The monster would not stop until every village and even the legendary Conqueror's City was under his control. But sometimes, evil cannot be cut down by the sword and shield of a lone hero. The people of the Borderlands rallied under one banner and rebelled against tyranny! 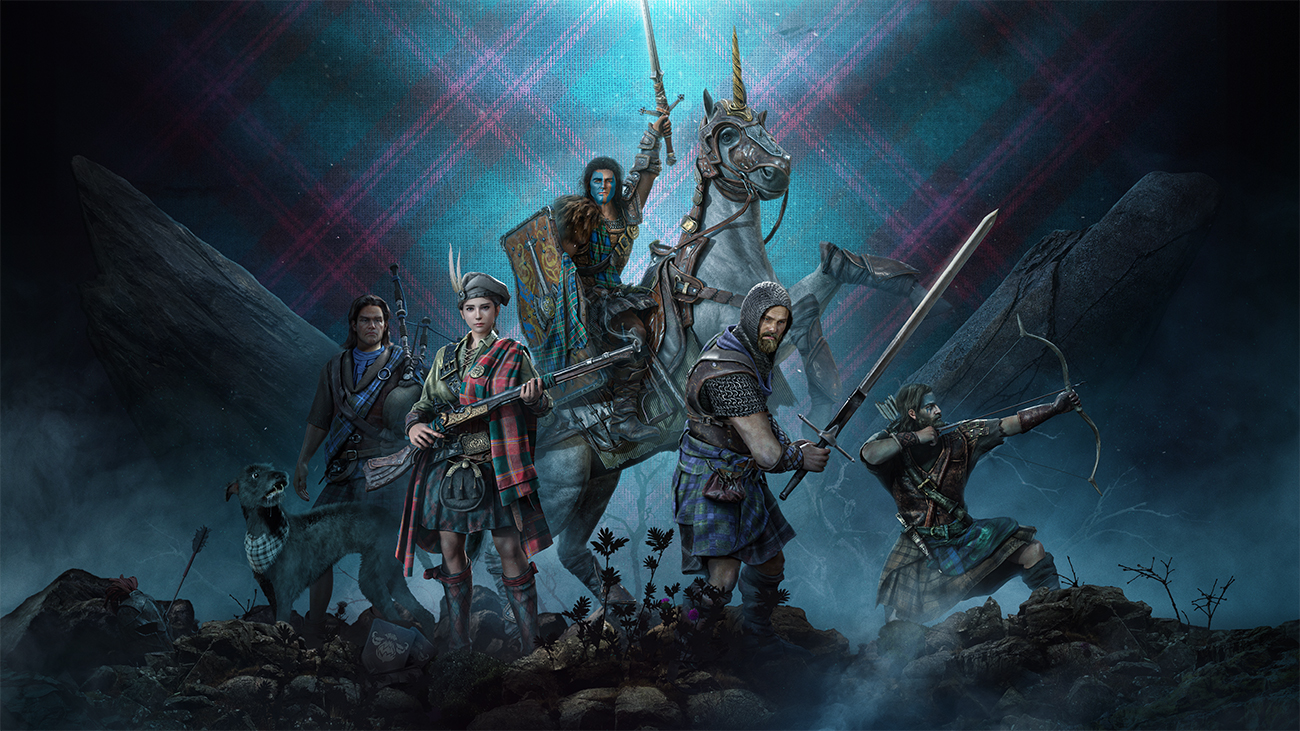 Aelba, a lush green country commonly known as the Highlands, had long been subjected to a brutal military occupation by its southern neighbour, the Kingdom of Loegria. Aelba's own clans had also been fighting a civil war. Their chieftains' endorsement of cattle raids, arson, and blood feuds had thwarted attempts to form a single, unified kingdom. However, as times grew more desperate and the days ever darker, the Highlanders realised that they must put aside their bitter rivalries and fight back against this injustice. The clans were united to push back against the Loegrian armies, and the fight for the freedom of the Highlands began! 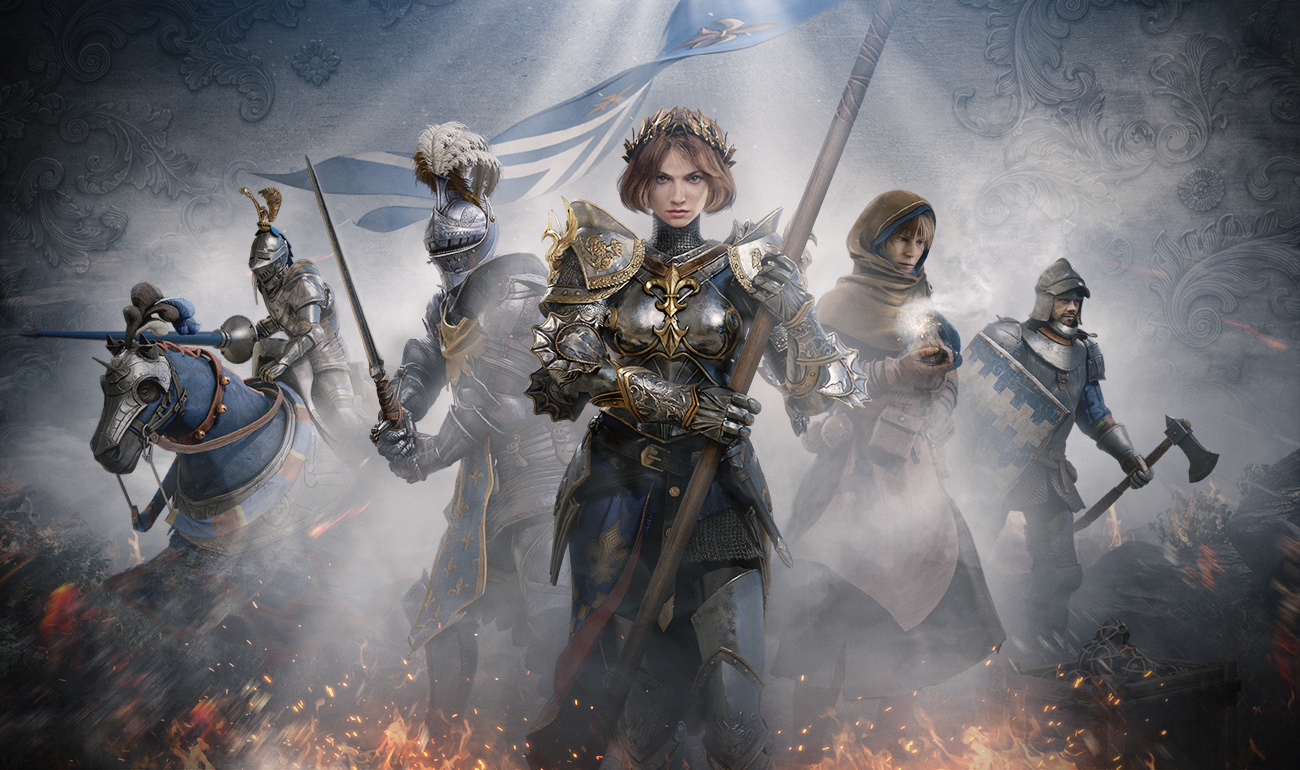 South of the Great Isles lay the kingdom of Pays-de-la-Gloire. This rich and fertile land was home to decadent mining, winemaking, tapestry-weaving, and shipbuilding industries. Fresh from a defeat at the hands of Aelba, however, a desperate Loegria had set its sights on this wealth… But this injustice would not stand. Brave knights and skilled healers rallied to a fearless warrior-seer, Gabrielle-Mäelys, who was determined to make her divine visions of victory a reality. These paragons of virtue stood before their enemy with banners firmly planted, hearts beating defiantly, and horses rared. Pays-de-la-Gloire would not fall.

Stay tuned to watch the world of Conqueror’s Blade evolve and grow, and thank you for three years!