Just as the people of Pays-de-la-Gloire in Conqueror’s Blade: Paragons are fending off an attack from the Loegrians this Season, so too did the French fight off the English and their claim to the throne in the Hundred Years’ War (1337–1453). Lasting 116 years (more than the name would suggest), Hundred Years’ War saw sixty battles waged, with around three million people having lost their lives in the conflict.

Some battles were more crucial than others to both the outcome of the Hundred Years’ War and the events that followed. Whichever sides emerged victorious in the individual conflicts, they all played an important role in the eventual success of France.

The naval Battle of Sluys marked the onset of the Hundred Years’ War, led by King Edward III of England. In a non-traditional concept for medieval warfare, Sluys was fought at sea, off the coast of Flanders. Although France had the upper hand with over 200 ships, much more than their English counterparts, they were outgunned (so to speak) by English longbowmen, resulting in the French fleet being seized or destroyed. Over 10,000 French sailors were injured or slain, but only a few hundred Englishmen were killed.

This engagement obliterated any power the French navy had, allowing Edward’s army to land in France easily from then on, setting the stage for the war to be fought mainly on French soil.

The Battle of Morlaix was the first land battle to be fought in the Hundred Years’ War. Taking place in Brittany, a powerful French army advanced on Morlaix to alleviate the besieged town from the robustly fortified English.

However, despite suffering heavy casualties, the troops of peasant soldiers and mounted knights managed to force the English forces to retreat into the nearby woods. Although this was one of the first ever recorded tactical withdrawals in medieval warfare, the English ultimately lost this battle.

Over 14,000 English soldiers landed on the coast of Normandy on July 12, 1346, and upon hearing that King Philip VI was launching an attack of his own, Edward III halted his forces and prepared for a foray at Crécy.

The Battle of Crécy was as deadly as it was decisive as Edward III’s English army decimated the French forces with the longbow, which had a faster reload time and long-range capability. While Philip escaped relatively unscathed, his forces were depleted, and Crécy was won by England.

After their assertive victory at Crécy, the English army was confident and bloodthirsty. They carried out attacks on rural French towns in an effort to spread dissension amongst the peasantry against the new French king, John II. The raids of villages and towns were led by the Black Prince—Edward III’s son—and his army. Just like Crécy, this force included thousands of longbowmen, some veterans of the aforementioned battle.

John II’s army pursued the English, catching up with them at Poitiers, where a battle the French were poised to win unfolded. The French outnumbered English forces but were ultimately brought down by their archers. John II was captured, and England had won again.

A painting entitled ‘Sketch for the Battle of Poitiers’ by Eugène Delacroix (c. 1829-30)

Over a dozen battles had occurred since Poitiers, but none so crucial as Agincourt. King Henry V was on the throne of England and had ordered an advance following a heavy storm, on the back of a claim that the French King Charles was mentally ill and would therefore not be able to withstand an attack on his forces. The French, yet again, dwarfed the English forces with double the manpower, but once more, English archers and longbowmen set about to slaughter and killed 6000 French soldiers.

Immortalised in Shakespeare’s Henry V, the Battle of Agincourt resulted in yet another unexpected triumph for England. 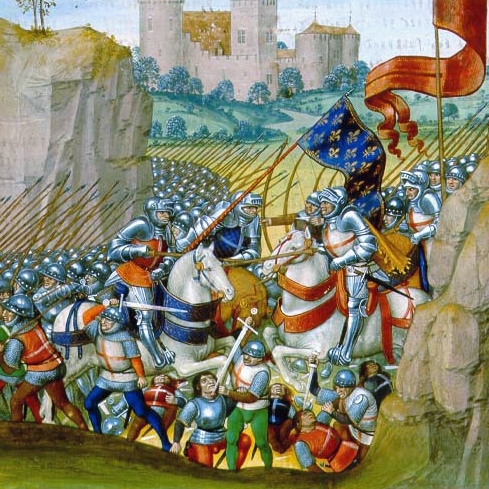 The Battle of Agincourt by Enguerrand de Monstrelet (c. 1495)

France’s luck began to change by 1428 when their heroine came to the fore—Joan of Arc. The supposedly divine teenage girl bravely led her army, given to her by French prince Charles VII, into Orléans to lift the siege brought about by the English.

Joan was an unerring source of motivation for her troops, and many believe she was the sole reason for this vital French victory. With English forces repelled from the historic city, this also marked the beginning of the end for England’s aspirations of conquest.

Thought of by many as the battle that marked the end of the Hundred Years’ War, Castillon proved to be a devastating loss for the English. Henry VI lost most of the territories that Henry V had gained, and the attempt to recover them resulted in catastrophic casualties.

English commander John Talbot, the 1st Earl of Shrewsbury, led his men into an ambush after receiving news from a scout that the French were retreating. Four thousand
English soldiers were obliterated by arrows and cannons, a stark contrast to French losses of around one hundred men. A notable fact about the battle of Castillon is the usage of such field artillery, one of the first battles in Europe to make use of them.

With Castillon forcing the English to fall back, the Hundred Years’ War was effectively over, and France came out on top.

Read up on more French history with our Conqueror’s Tales series on food, literaturelandmarks, and weapons.