While many historical sites and buildings are eroded by the sands of time, some of the most awe-inspiring and impressive medieval structures still stand strong and tough in France today, inspiring millions of visitors who come to marvel at these ancient locations every year.

Conqueror’s Blade: Paragons wears its real-life French cultural and architectural influence on its sleeve in Pays-de-la-Gloire, especially in the city of Aurelian when battling for La Grande Gloire and navigating its bridges, walls, and magnificent monasteries.

From fascinating fountains to commanding castles, join us as we explore the Medieval landmarks of France still standing today, perfect for an inspiring and educational vacation.

Minerve is a small but stunning Medieval village ensconced between two gorges and lodged atop a range of rocks. Originally a Cathar city, Minerve is home to a stunning 11th century church of Saint-Etienne. Minerve also houses exceptional vineyards, first planted by Romans, and the wines made there are famous for their fruity and mellow tastes.

The village also features astounding natural bridges, tunnels and arches carved by the surrounding rivers themselves, which become accessible to explore during the drier months.

Château de Falaise (or Falaise Castle), housed in the Norman city of Falaise, was built in the 10th century and is most famously the birthplace of William the Conqueror (1028–1087).

His mother, Helvera, was said to have had a horrifyingly prophetic nightmare while pregnant with William in the castle, in which a tree grew from her stomach and its branches reached across the channel to England, casting a tremendous shadow over the country like a monster. As we know now, this prediction would come true in a sense, as William would go on to conquer the Anglo Saxons and become King of England.

Château de Falaise has more than just rich history to admire; you can also see evidence of the people who called the castle their home, thanks to William the Conqueror’s son, King Henry I of England, who returned to rebuild the fortress and added plenty more intimidating towers and defensive capabilities.

With its storied walls housing a museum, a replica trebuchet, and graffiti carved into the walls by bored soldiers during the Hundred Years’ War, Château de Falaise is teeming with history just waiting to be uncovered. A photograph of Château de Falaise by Alfred Capel Cure (1856)

Fancy feasting your eyes on works of fine art from legendary artists such as Monet, Dali, Picasso, Rodin, and many more, set against a backdrop of a medieval abbey? Then look no further than Flaran Abbey in Valence-sur-Baïse, France. Constructed in 1151, this monastery is home to an enormous collection of great works of art, including paintings and sculptures.

You can also sit awhile in the beautiful gardens that surround the abbey, perfect for musing on a beautiful work of art while enjoying the scenery.

Located on Rue de Innocents in Paris, France, this auspicious 16th-century fountain marks a site with a less than pleasant history. Formerly a 12th-century medieval cemetery by the name of Holy Innocents’ Cemetery (Cimetière des Innocents), this Parisian graveyard was once the biggest in the city. However, as the years wore on and more bodies were buried within its walls, it became over-filled, and the stench (along with the pests it attracted) became a serious problem. Thus, the cemetery was closed.

The bodies were disinterred and relocated to the Paris Catacombs, and the memorial of the Fountain of Innocents took shape on the original gravesite in the 16th century. Old cemetery arches and walls can still be seen in the now bustling square full of markets and cafes, ensuring that its history is remembered. 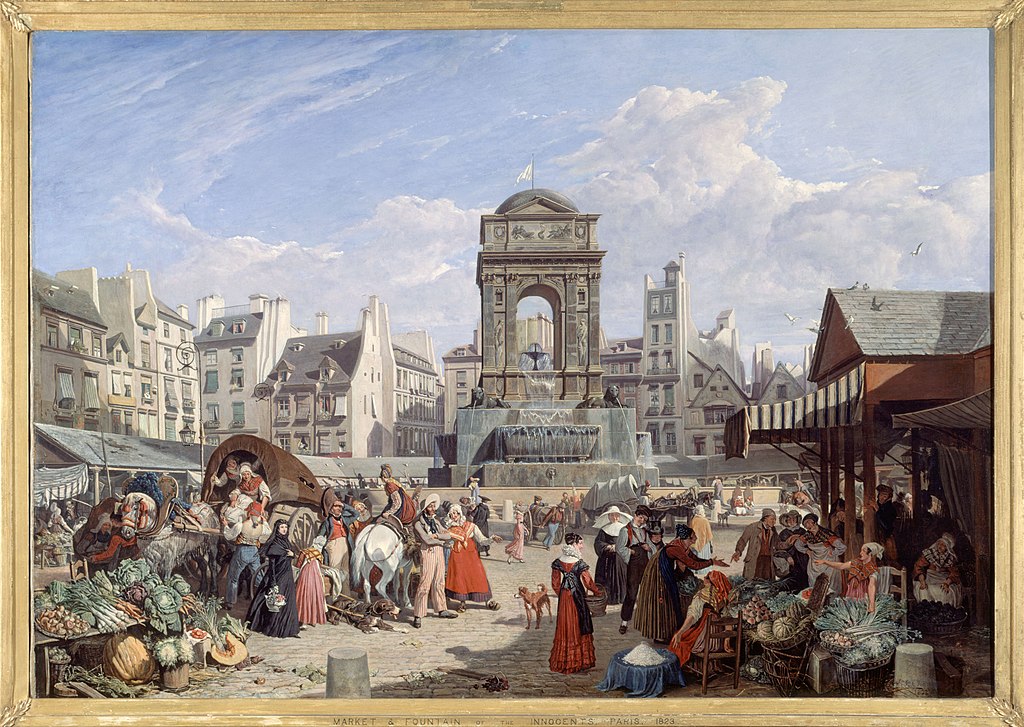 A painting of Fountain of Innocents by John James Chalon (1822)

The ruins of a medieval castle with a dark past lies in wait for curious visitors in Machecoul, France. The legend of Bluebeard is linked to Château de Machecoul, as it was home to the inspiration behind the murderous character.

Gilles de Rais was a medieval lord from Brittany whose crimes were numerous and horrendous. After fighting alongside Joan of Arc in the Hundred Years’ War, his luxurious lifestyle lead to a keen interest in the occult. His efforts to summon demons and create gold through alchemy led to an unfortunate habit of slaughtering children. This led to his arrest at Château de Machecoul itself, followed by his conviction and execution in 1440. Many believe his life inspired Charles Perrault’s tale of Bluebeard (Barbe Bleue), a decadent nobleman with a penchant for spousal murder.

Chateau de Machecoul (or ‘Chateau de Gilles de Rais’ or ‘Bluebeard’s Castle’) still lies in ruins, but the current owners have made efforts to restore it, and now offer tours of the grounds where visitors can immerse themselves in the French history it has to offer.

Engross yourself in French history with our Conqueror’s Tales, and discover what inspired the people and culture of Paragons, from their delectable food to their inspiring literature, to the gallant Joan of Arc.

Plan for Victory in Tactical Battles until April 27!