Known today as the food capital of the world, France is famous for its sublime cheese, delectable bread, delicious pastries, and, of course, divine wine. These items were perfected in the Medieval period when the rich discovered far away places with intriguing spices, while peasants had to make do with whatever they could cultivate from the land. Resplendent recipes and delicious staple dishes were created that still grace the lips of locals and tourists to this day.

Let’s explore the food that the people of Medieval France were tucking into and just which mouthwatering meals they were relishing.

The feasts of the aristocracy during Medieval times in France were things to behold; tables laden with meats and breads, all seasoned with the most lavish spices and seasonings money could buy (and only the affluent could get hold of). These exotic herbs included cinnamon, nutmeg, and cumin, among many others, and were served along with lavish meats such as swan and peacock. The myth that spices were used to cover up the smell of spoiled meat is false in the case of the elite in Medieval France; they were certainly not served rotten food.

But who were the ones cooking this magnificent feast? The staff included a maître queux (head cook) at the head of the staff, all the way down to the oven-working souffleur. Recipes were passed along to other chefs and kitchen staff by word of mouth, then handwritten, and eventually transitioned to printed cookbooks. The first example of these were culinary treatises in the 13th century. 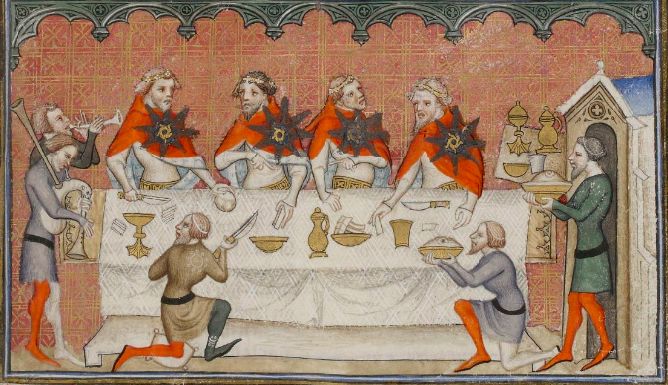 But what of the nobility of Pays-de-la-Gloire in Conqueror’s Blade: Paragons? They would most likely be served multiple courses of everything from squab to wild boar and finished with a dessert of pears stewed in wine. Common fare would include shortcrust pies (which were developed in the Medieval era), aged cheese, hypocras (spiced wine), and dragées (spiced lumps of set sugar or honey), just like their real-life counterparts.

The peasants of Medieval France were definitely not sitting down to a dinner of quite such sumptuousness. A typical meal for a poor peasant of the time would consist of cabbage, onions, herring, and wheat bread. Herring and cuttlefish were everyday fishes, unlike the bourgeois’ cod, salmon, and pike. Salting meats was necessary to preserve them for the poor, much like everywhere else in Medieval Europe at the time.

However, they didn’t miss out on some of life’s luxuries; even the poorest still drank wine which they cultivated from the vine themselves. There were no exotic spices with which to season their paltry meals, though, only mustard which was widely grown.

Immerse yourself in French history with our Conqueror’s Tales, and learn about everything that inspired the people and culture of Paragons, from the gruesome guillotine, to the misunderstood Marie Antoinette, to telltale tapestries.

Behind The Scenes: Paragons Units