Marie-Antoinette-Josèphe-Jeanne d’Autriche-Lorraine, better known as Marie Antoinette, was born in Vienna in 1755, the 15th child of Holy Roman Emperor Francis I. Although she was brought up around all the finery bestowed upon a royal, her life would ultimately end in tragedy.

Marie was well-educated in both traditional and cultural topics. Still, her lineage was her true worth to her home country of Austria, and she was married at only fourteen to the French King Louis XVI to forge an alliance between the two states.

Her life with Louis was complex, and tinged with sadness from the onset. When Marie was presented to the people of France in her first public appearance in June 1770, around 50,000 people gathered in Paris to see her, but the mad rush to catch a glimpse of the new Queen resulted in thirty citizens being crushed to death.

This trend of extravagance continued, and Marie threw lavish balls, gambled, and even built a secluded village just for parties on the grounds of the Palace of Versailles. The retreat was popular among her ladies-in-waiting, and they would amuse themselves by dressing up as peasants, which members of the court and the public took as mockery.

It wasn’t just her lavish lifestyle and rumoured caricatures that rubbed her critiquing public the wrong way, though; the brash young woman inserted herself into politics far too readily for some people’s liking, seeking to advance Austrian interests. Heavy taxation was already a burden on the people of France, so Marie’s seemingly endless spending did not help matters in the world of public opinion. There were also rumours of an affair, and subsequently, suspicions arose about the identity of the real father of her children. 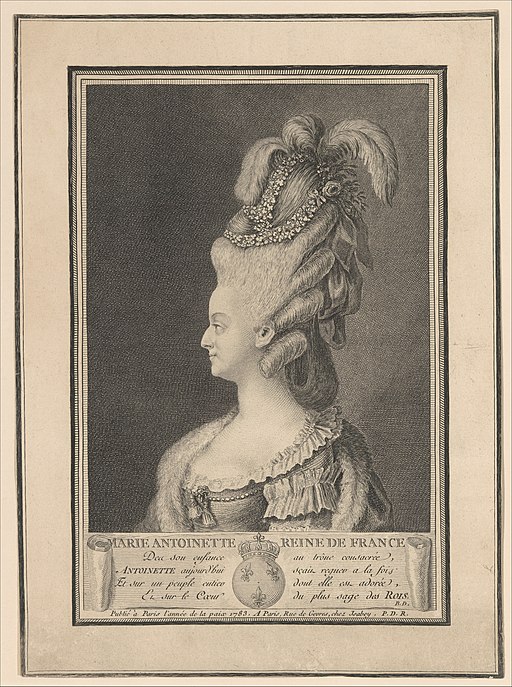 During this time, she was alleged to have uttered an infamous quote; “qu’ils mangent de la brioche” or “let them eat cake” upon hearing that the French people couldn’t afford bread. A cruel remark that, if true, would have seen public opinion plummet due to the decadent misunderstanding of her subjects’ poverty. However, historians have since attributed this quote to a Spanish princess named Marie-Thérèse. She offered that the French people eat “la croûte de pâté” (or the crust of the pâté) in 1660.

On July 14, 1789, the Storming of the Bastille signified the start of the French Revolution. Radical change was on the horizon, and a monarchy was standing in the way of true liberal democracy. The people of France were disillusioned with their royals, and fearing for her life, Marie attempted to flee Paris and return to Austria but was captured along with Louis XVI and her family.

Found guilty of treason in 1793, Marie fell to the Reign of Terror, where thousands of “counter-revolutionaries” were executed by guillotine. She faced her fate on October 14 at the age of 37.

While Marie Antoinette may not have been the most popular French queen in history, she has been immortalised in print and film as a vivacious and shrewd young woman.

Explore more of the history that inspired Conqueror’s Blade: Paragons, and read up on another infamous French woman, the heroine of her time, Joan of Arc.