The play-in period has concluded, and the 16 teams competing for glory in CBL: Winter War 2021 have been decided. It’s time to meet your challengers for the title of Conqueror’s Blade Champions. Let’s find out just what they’re made of! 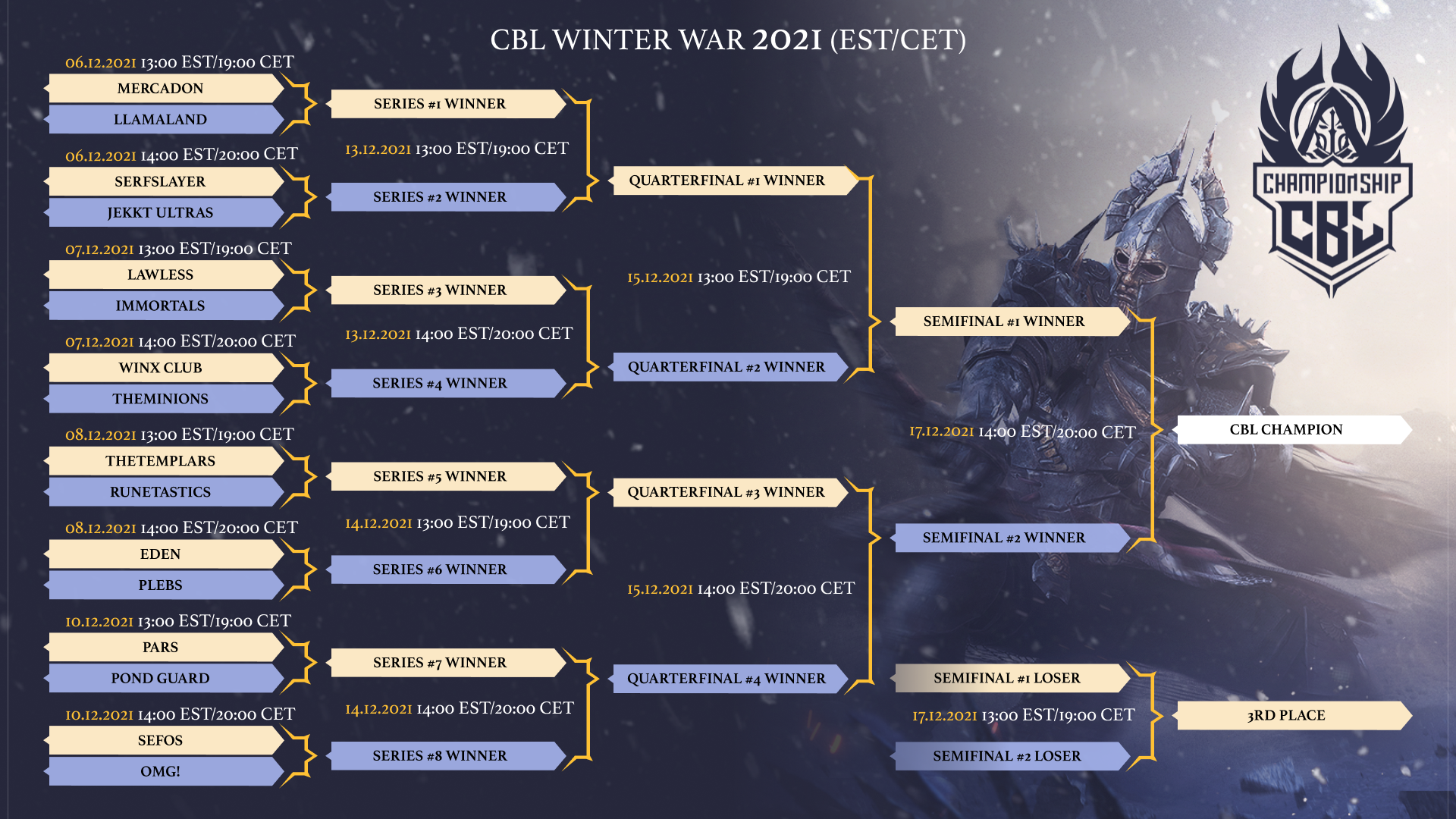 Your reigning champions Llamaland are back for more! As the winners of CBL: Fall Fight 2021, Llamaland has a title to defend, and led by their captain MetheKhan, they just may seize first-place yet again. A word of warning—if you’re up against Llamaland, alpaca your bags for you.

This Spanish team is made up of Conqueror’s Blade veterans who have been playing since Season 1. They had this to say of their prospects in CBL: Winter War 2021: “We have enough individual quality and we know how our teammates play, that makes it easier when it comes to push or defend a point—the communication between us is good.”

Your fourth-place title holders from CBL: Fall Fight 2021 intend to climb even higher in the ranks this time around, saying of their aspirations; “talent wins games, but teamwork and intelligence win championships!” Just as there may be no Serfs in their Warband Builds, there’s no “I” in “team”!

Lawless describe their team as “a community melting pot filled with members of many different walks of life” and can’t wait for their perserverance to shine through in the upcoming matches and “want to show everyone that we're constantly growing, adapting, and becoming the best House we can be.”

A simple yet poignant message from WinX Club about their ambitions for CBL: Winter War 2021: “our goal is to be first”. Fair enough!

This squad made up of top 25 Ranked players has banded together to become a formidable force in this battle for dominance, and “know each other from fighting alongside and against each other!”. Know your enemy, am I right?

The HUN and GOKTURK Houses have put aside their differences to become reborn as PARS, one of the few Turkish teams competing in CBL: Winter War 2021. Like a phoenix rising from the ashes, will the newly-formed PARS soar, or will they explode into nothing but feathers and a beak? Only time will tell.

Win or lose, SEFOS has already won the award for “most wholesome team bio”, saying of their goals in the tournament; “we are both good players and good friends with each other and after we met in this game we met in real-life. We are proud of our squad and friendship, it doesn't matter if we win or lose.” Aw.

Your third-place team from CBL: Fall Fight 2021 isn’t giving up the title this time without a… fight. This troop of vets has one thing to say: “what will make our team great? Grapeshots.” Explosive!

This Spanish squad includes members who have been playing since the launch of Conqueror’s Blade, and are hoping that “with the number of experienced players we have, we will fight for a big title, or at least put on a good show”. Here’s hoping!

Missing out on the champion title to Llamaland in a thrilling final in CBL: Fall Fight, Pond Guard’s morale hasn’t weakened following their defeat, and they hope to perform the best they can “with individual skill and solid teamwork”.

Young and old, beginner and veteran, everyone is welcome in Immortals (as long as you can handle banter). Planning to prove their immortality is not just their namesake, Immortals is bringing their “family of warriors” into the fray.

Diversity, teamwork, and patience is the name of TheMinions’ game—“end of story”. We wonder if they’ll play in yellow attire...

Hoping their strategy of investing “the most time in creativity to make a lasting impression” pays off, Jekkt Ultras is an EU1 team that aspires to “jekkt” their competition (whatever that means).

OMG! is on a mission to “collect the best players from Russia and Ukraine”, and dream of improving on their top eight finish from CBL: Fall Fight.

This German team’s main squad is made up of members of the RunenKrieger House, and they’re presumably expecting that the mystical power of runes will lead to victory.

Only one team can be the victor and claim exclusive prizes, as well as the opportunity to battle on a global scale against the winners of a Tournament hosted by Booming Tech in January (more details coming soon)!

Tune in to Conqueror’s Blade on Twitch for match coverage and commentary on the following dates:

Good luck to the competitors, and let the battles begin!