The CBL: Fall Fight 2021 Tournament has come to a magnificent conclusion, and we have all the highlights you need right here! Over dozens of battles, teams fought for their place in the next bracket, eventually leaving us with the victors.

First and foremost, we’d like to thank everyone who participated in the 16 magnificent battles, and our fantastic shoutcasters: CoffeeFuelledGaming, KiNGAlphaTv, Evo Loz Gaming, 9Fingers, and Zimster. 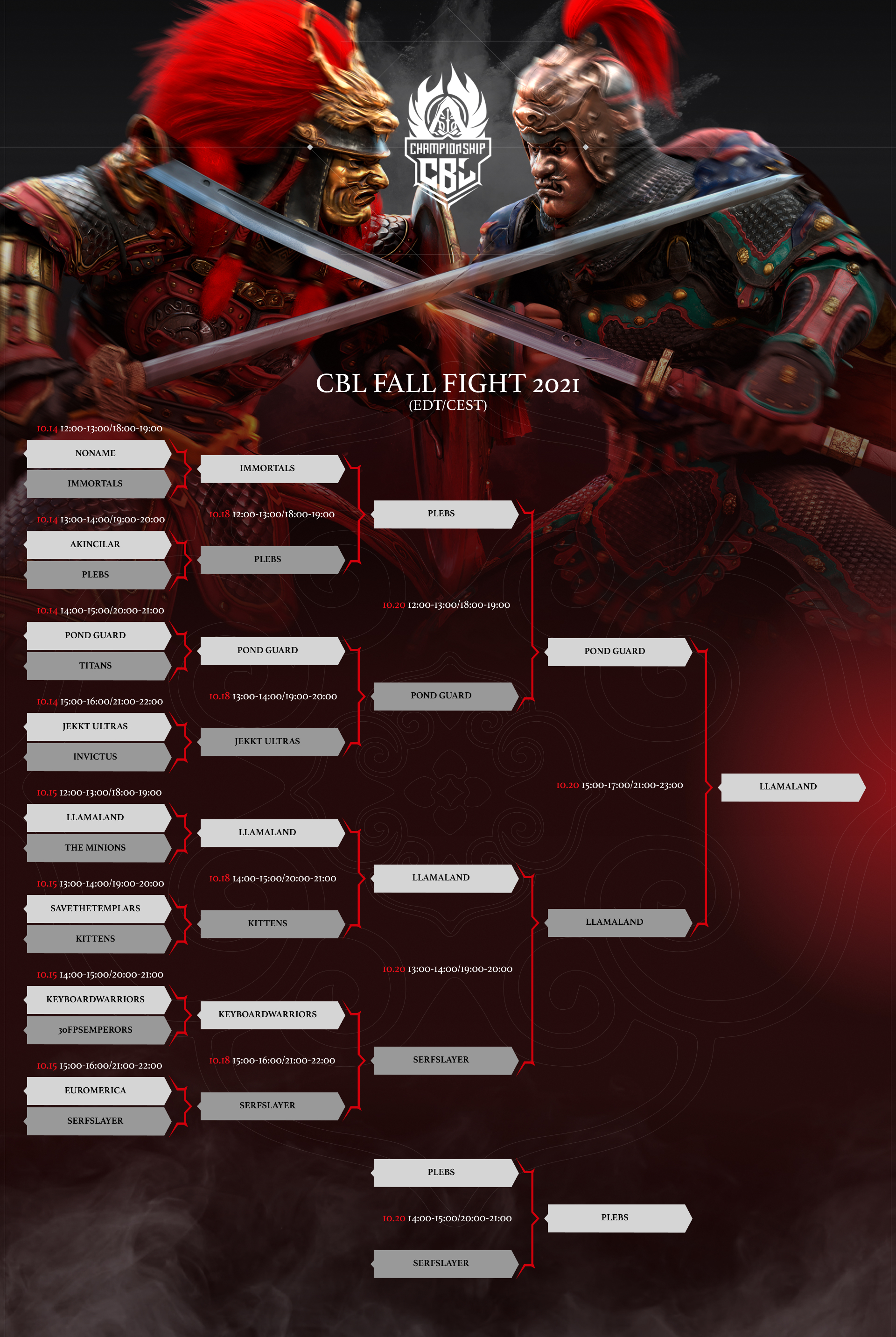 Congratulations to Llamaland (EU), a fearless troop of fighters led by their captain MetheKhan, who seized first place in the CBL: Fall Fight 2021! And to the victor, go the spoils. This team has earned a CBL-exclusive Hero Attire, an exclusive Champion Player Title, a CBL Avatar, 5,000 Sovereigns, a Backflip Emote, 1,000 Blades, and 50 Wyrmbane Armour Attire Boxes!

Their captain had this to say of their triumph: “I would like to thank the Conqueror’s Blade family, my House, and our players for giving us all these amazing memories. I would like to present my infinite gratitude and respect to the CBL team and our competitors.”

They’ve also earned the right to battle on a global scale against the winners of a Tournament hosted by Booming Tech (more details coming soon)!

In a thrilling final against Llamaland, Pond Guard (NA) stood strong. Led by their captain Pyan, who had this to say of CBL: Fall Fight 2021: “Pond Guard is very thankful for the opportunity to compete in the CBL once again. We hope to have provided entertaining matches as we strived for first place but ended just short at second. All teams played exceptionally well, and I hope to see more successful CBL tournaments in the future!”

The team won’t just have memories to go home with, as they also receive an exclusive Runner-up Player Title, a CBL Avatar, a Backflip Emote, 3,000 Sovereigns, 800 Blades, and 35 Wyrmbane Armour Attire Boxes.

Plebs (EU) fought the good fight and came out of the CBL: Fall Fight 2021 in a very respectable third place. Captain Templeshot had this to say of their experience: “Thanks for another great CBL tournament! As Plebs, we had some great games and are very proud of our performance, and we beat some strong teams to get to third place. I want to take this opportunity to thank all the teams that participated and the team that organised and ran the whole event - without you, none of this would be possible. And of course, big thanks to my team. Next time we'll come back stronger than ever and try our best for the win.”

Their team won’t be going back to the Borderlands empty-handed, as they will claim an exclusive Third Place Player Title, a CBL Avatar, a Backflip Emote, 2,000 Sovereigns, 500 Blades, and 20 Wyrmbane Armour Attire Boxes.

CATCH UP ON ALL THE ACTION

Missed out on the fun? You can catch up on all the CBL: Fall Fight 2021 action right here:

Thanks to everyone who made CBL: Fall Fight 2021 a success! We will host more tournaments in the future, and you can check back right here for more info when the time comes. If you have any feedback about this Tournament, please share it with our team via the Conqueror's Blade Discord.

Follow Conqueror’s Blade on Twitch for more exciting live broadcasts from the team every week, and stay tuned for the ultimate showdown between our victors, Llamaland, and the champions from Booming Tech’s own Tournament!

Dance in the Dark with Halloween Playlists on Spotify!