Every day you can take part in special event modes in Conqueror’s Blade, ranging from warlord-only Deathmatch skirmishes set within intimate arenas, to vast Territory War siege battles that can decide the outcome of an entire season.

Be sure to visit the Conqueror’s Blade Discord channel to be kept abreast of any temporary changes to the Events Schedule. 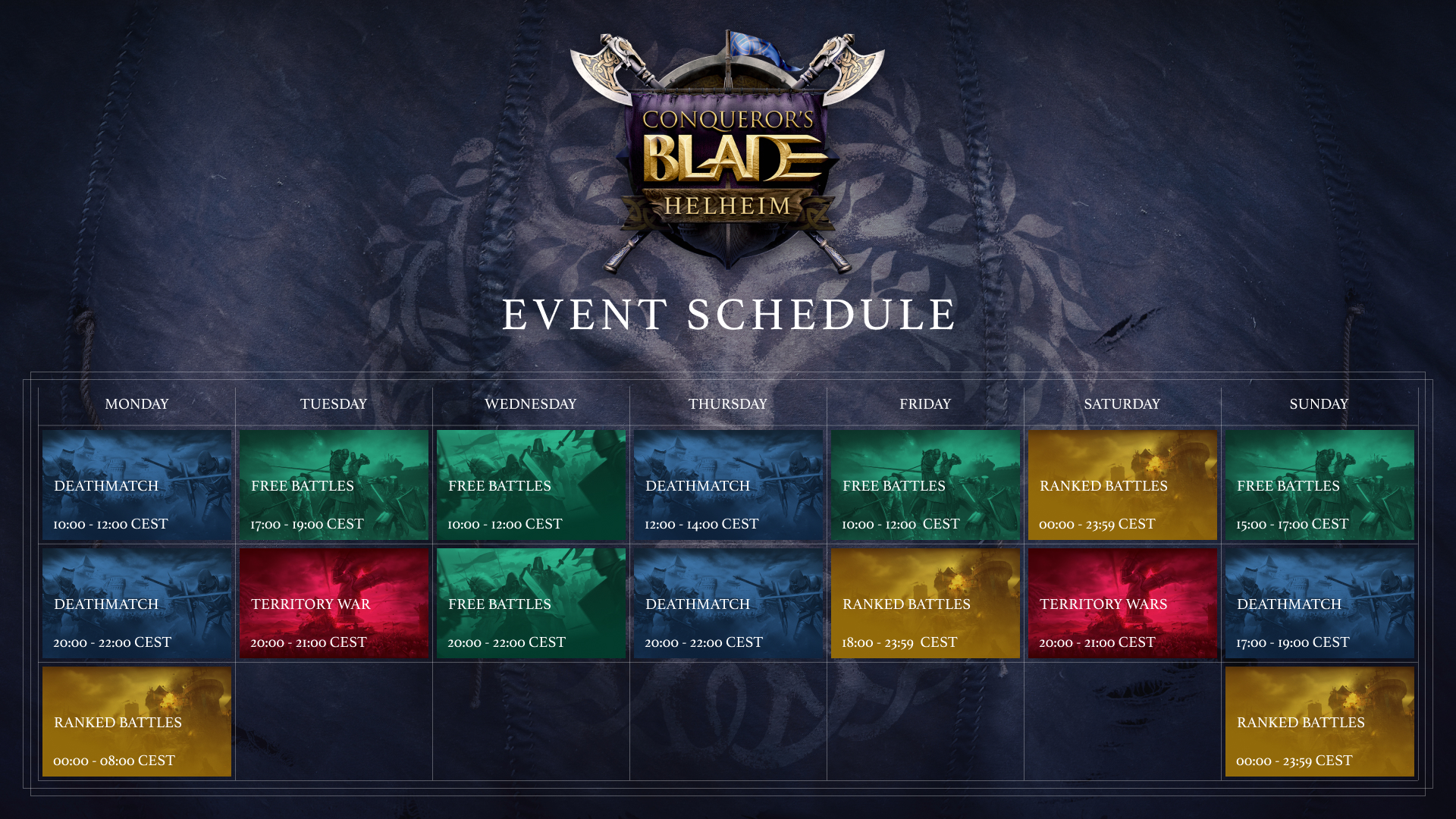 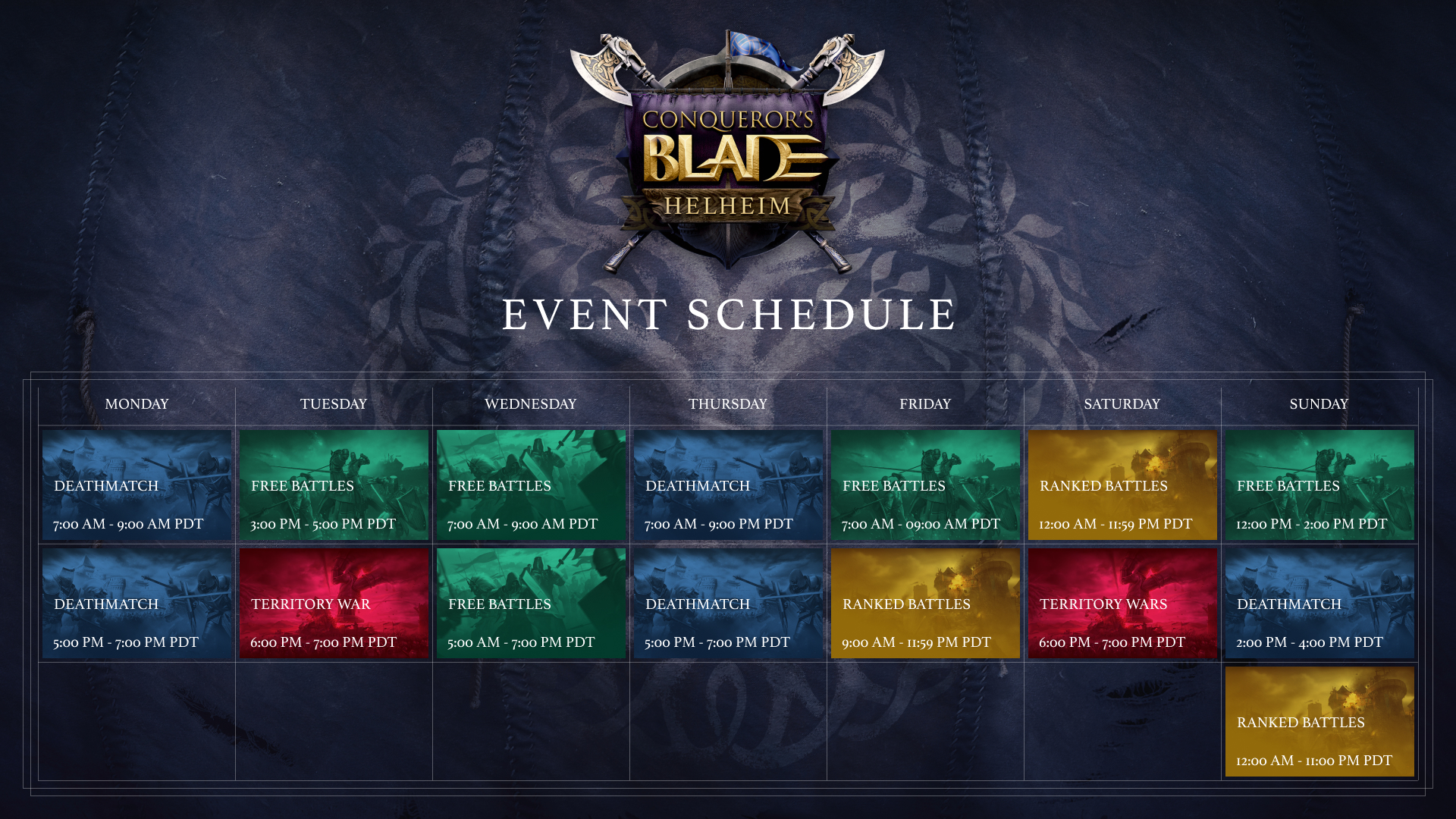 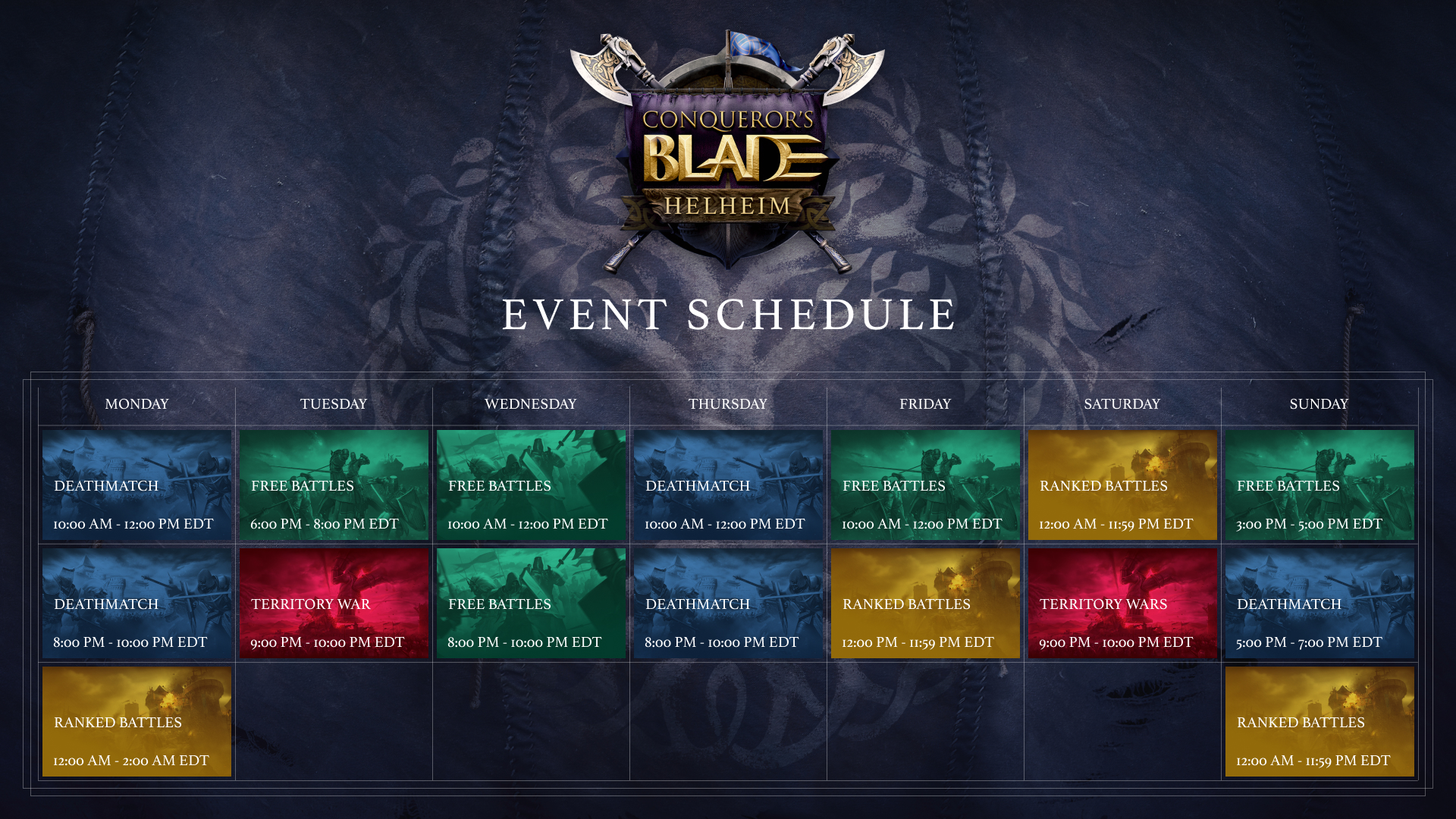 Deathmatch: Cross blades with enemy teams, and prepare for all-out warfare. In this team deathmatch style mode, the first team to reach 30 kills reigns supreme! Duels can be played on the Mountain Struggle map every Monday evening, and on the Navy Shipyard map every Thursday evening.

Territory Wars: Join forces with your House and engage in server-wide battles! Vie for control over villages, forts, and cities, and all the land and resources that surround them. Territory Wars are fought every Tuesday and Saturday evening. Note that when the event timer has run down, no new battles or battle lines can be joined. Ongoing battles will however continue and can be joined until they are concluded.

Free Battles: Wage war on three different maps to reap bigger and better rewards! Engage in field battles on the Field map every Wednesday evening, capture points and enemy camps on the Conquest map every Friday evening, and raze cities to the ground on the Siege map every Sunday evening.

Ranked Battles: Unlike regular matchmaking battles where you primarily earn Bronze and XP, Ranked Battles are all about creating a persistent record of where you sit alongside other heroes. Your efforts will still reward you with experience and go towards fulfilling quest objectives (although you won’t receive any Bronze), but Ranked matchmaking is primarily about establishing an evolving order of dominance.

What is “Drill Mode”?

At rare times when there are unresolved issues that could hinder fair gameplay, events - Territory Wars specifically - can be put into what we call “Drill Mode”. Effectively it’s a kind of training mode, which retains all the functionality of the event, with none of the consequences. So, you can still attack and defend settlements in epic battles, but any change in ownership or status will revert back to how it was before the event started.

The basic rules of Territory Wars are not changed by Drill mode: the foraging costs when marching in the open world are the same, you’ll still need to attack and choose a side to start an engagement, you only have one life and the outcomes follow the same rules - only minus any long-term effects.

Note that we may also use Drill Mode at times of the year when a low player population may not ensure the best experience - such as when Territory Wars clashes directly with a public holiday, or when access to services for a significant part of the player population is limited.

Whatever the circumstances, we always aim to inform players ahead of time when Drill Mode is to be enabled. Always check our Discord and other social channels for up-to-date server and event status news.